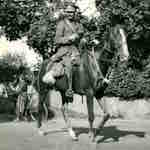 EFFINGHAM AND THE GREAT WAR

The Steps to War

This article written in 2011 describes the events on the world stage leading up to the First World War and Britain’s declaration of war on Germany in August 1914 led rapidly to the enlistment of men from Effingham. It goes on to describe how some of those men subsequently lost their lives and the campaigns in which they had fought.

At least nineteen servicemen associated with Effingham died either during active service while the war was in progress or (in one case) subsequently from their injuries. Their individual stories are told on the following pages.

Only seven of the men were born in Effingham parish: Barnett, Kemp, Ottaway, Smith, Wells (Arthur), Wells (Reginald) and Whittington; Vigars was born at Effingham Junction in East Horsley.

Six of the men were born outside Surrey: Bayly, Bullen, Patten, Roberts, Scarff and Taylor.

Five of the men had joined the armed services before the War: Bessell, Bullen, Scarff, Taylor, Wells (Reginald) and Whittington.

Only two of the men married: Bessell and Taylor. Only Taylor is known to have produced a child.

Only five of the men have surviving service records: Marchant, Roberts, Scarff, Smith and Wells (Reginald).

The average age upon death was 23.1 years.

The principal sources used for the genealogical findings were (i) the 1841-1911 Census Schedules held by the National Archives [Classes HO107 and RG9-RG14], (ii) the General Register Office indexes of births, marriages and deaths and (iii) the International Genealogical Index.

The principal sources used for the military findings were (i) the Commonwealth War Graves Commission, (ii) the WW1 Army Service Records held by the National Archives [Classes WO363 and WO364], (iii) the WW1 Medal Rolls held by the National Archives [Class WO329], (iv) the 80-volume work Soldiers Who Died in the Great War [Publ. H.M.S.O., 1921] and (v) the 44-volume Surrey Recruitment Register [Surrey History Centre, Woking]. 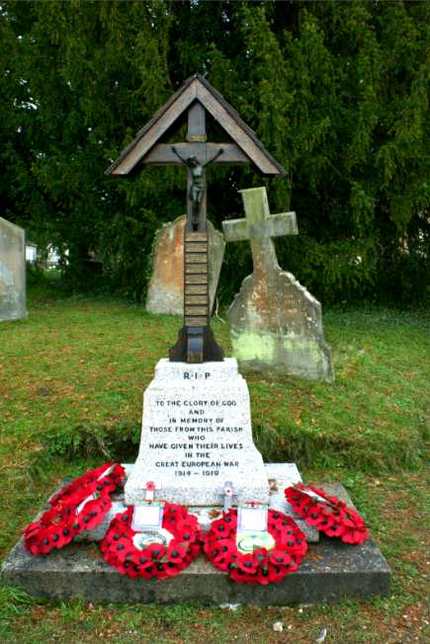 In the St. Lawrence churchyard, a few yards from its northern entrance from Church Street, stands Effingham’s memorial – sometimes referred to as the Shrine. It bears small metal plaques naming 17 men “from this parish” who died during military service in the Great War of 1914-18. It was erected in May 1918, before the war had ended.

In 2010, when Effingham Local History Group first began investigating the memorial, it named only 16 of these men; the plaque for one of them – Reginald Wells – had evidently disappeared. According to a transcription made in 1929 (authorship unknown) of the St. Lawrence monumental inscriptions, his plaque had been present at that time. We do not know when, or why, it subsequently vanished, but our best guess is that it was during some refurbishment of the memorial. In late 2012 the Group decided, with the agreement of the Church, to commission Ms Lucy Quinnell of ‘Fire & Iron’ with the task of producing a replacement plaque for Reginald, matching the original as closely as possible. His new plaque was duly mounted on the memorial in the autumn of 2013. 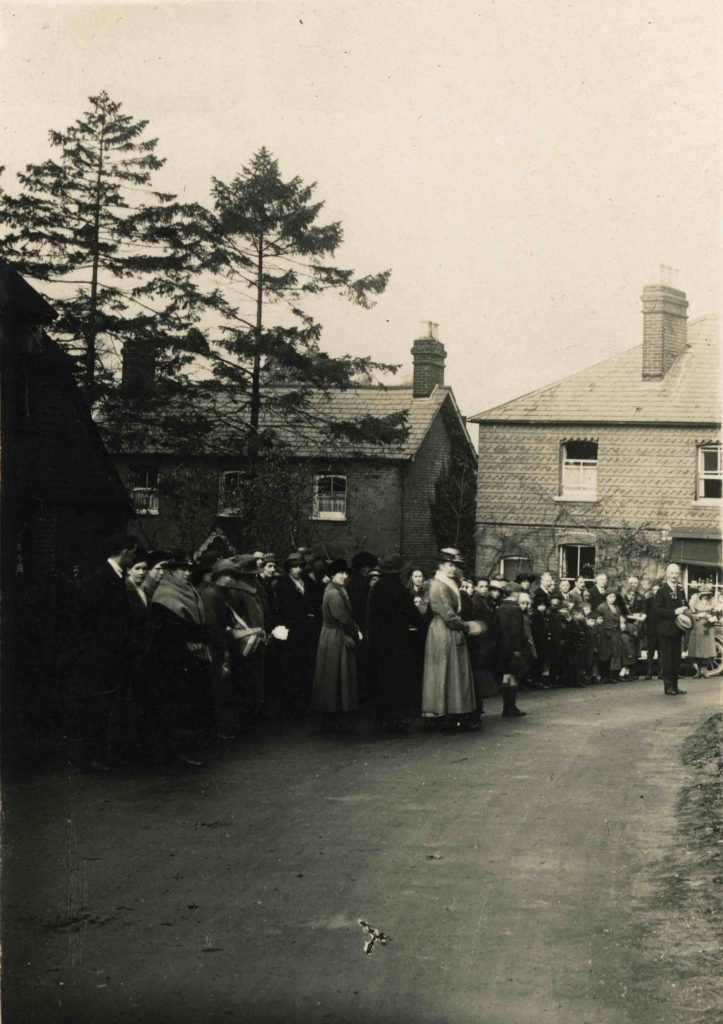 The Shrine was dedicated at a special service held on 9 May 1918, Ascension Day. The local National School was closed for the day and a large number of parishioners attended the service.

Although we cannot be certain, it seems very likely that the photograph on the left – contributed to ELHG by the grandson of one of the people (Mr Ralph Edgar Street) seen in the crowd – shows the dedication in progress. The view is looking roughly northwards down Church Street opposite its intersection with Chapel Hill. The Shrine in the churchyard lies just out of view on the right.

The memorial consists of a tall, canopied, stout wooden crucifix rising from an inscribed granite pedestal. On the canopy are the words “Greater love than this hath no man”. On three faces of the wooden upright are affixed 17 miniature bronze plaques, each inscribed with a serviceman’s rank, name, unit and date of death. Below is an example.

The origin of the Shrine has recently been investigated further by ELHG members, leading to a more extensive account that has been published on the Surrey Heritage website Surrey in the Great War: A County Remembers. Other articles have also been published there by ELHG, including very detailed studies of some of the Effingham servicemen and their families, and these are listed below.

• The Maxse family, Georges Clemenceau, Effingham and World War I

On 19 July 1919 Effingham held Peace Celebrations, along with most of the rest of the nation. Our knowledge of what took place here derives partly from a Programme of the day’s events and partly from a few photographs taken on the day.

The celebrations began with a long procession setting out from the grounds of Effingham House and wending its way through the village to arrive at Mr George Pauling’s residence The Lodge, where many other activities on the day were scheduled to take place. Attendance at The Lodge was evidently by invitation.

Opposite is a scan of a rare, possibly unique, surviving invitation card, issued by Mr Joseph Stewart Adams, Honorary Secretary of the organising committee. It was sent to siblings Rosa Helen and Louis Ralph, being the young children of Mr Ralph Edgar Street, the head gardener at The Lodge.

A number of articles based on these sources were written by ELHG members in 2011 and can be read using the following four links. They have not been updated since that time. However, our knowledge of the people and places involved has since expanded considerably and will in due course be presented here. 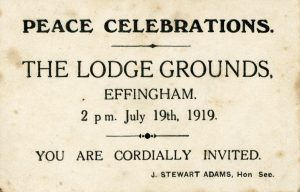 • Scan of the Programme

• Those named in the Programme

The Peace Celebrations in Effingham were reported in The Surrey Advertiser and County Times in its issue of July 26th 1919. A transcription of the article is given below and the original full cutting can be downloaded as a pdf. 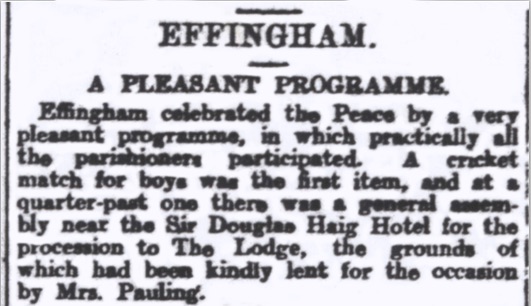 Effingham celebrated the Peace by a very pleasant programme, in which practically all the parishioners participated. A cricket match for boys was the first item, and at a quarter-past one there was a general assembly near the Sir Douglas Haig Hotel for the Procession to The Lodge, the grounds of which had been kindly lent for the occasion by Mrs. Pauling.

Mr. A. Stovell had got together a drum and fife band, which headed the procession, and played selections very creditably during the day. Ex-Regtl. Sergt. Major Dearling acted as marshal of the procession, which included members of the Parish Council, about 60 ex-Service men, war workers (under Mrs. Street), Girl Guides (under Miss Ross), Boy Scouts, school children (in charge of Mrs. Stewart Adams) carrying posies of red, white and blue flowers, decorated perambulators (under the village nurse), members of the Village Institute (under Mrs. C. W. Dodson [sic – Dodman]), and parishioners generally. Two Boy Scouts carried in front of the ex-Service men a Union Jack and a laurel wreath inscribed to the memory of those “whose great sacrifice led to our peace.”

In charge of Mr. J. Stewart Adams, the procession proceeded to the Manor House, whence, after a brief halt for a photograph, it continued to the church, where, in silence, all the men stood bare headed while Scouts Lamb and Longhurst placed the laurel wreath upon the war shrine as a tribute to the fallen. Then, as the bells rang forth, the procession moved on to The Lodge, where a round of festivities was carried through.

A cricket match between ex-Service men and the village was won by the former by 113 runs to 43; a stoolball match between ladies (Miss Madge, captain) and gentlemen (Mr. C. W. Dodman, captain) provided plenty of amusement, the men batting left-handed, but time would not permit of a finish; adults and children were provided with a bountiful tea; a good tug-of-war resulted in victory for the village; sports for children and adults were keenly contested; and a fish-pond and a bran-tub were in charge of Miss Teesdale and Mrs. Adams. The adjudication of best decorated “prams” gave Mrs. A. Jackson first prize and Mrs. Craddock second, Miss Jane Pauling receiving a consolation prize for her youthful turn-out.

Mrs. Pauling presented the sports prizes, and also gave each child a souvenir beaker. Capt. F. C. Booth, V.C., voiced the thanks of the villagers to the secretary (Mr. J. Stewart Adams) for his successful efforts; and the hon. secretary, in reply, said thanks were due to many other workers behind the scenes.

A feature of the afternoon’s proceedings was the presentation of souvenirs to Service and ex-Service men, who were drawn up on three sides of a square. Lieut.-Colonel Sir Adelbert Talbot, K.C.I.E., in a few words pointed out that the immediate danger was over, but one thing was necessary to avert another imminent danger, and that was whole-hearted effort for the best on the part of every member of the community. He mentioned that it was the intention of the Parish Council to present to the relatives of the fallen a small inscribed medal. The souvenir to the men was an elegant malacca cane “from the village of Effingham,” and as it was not possible to procure sufficient of these for all, other sticks were to be given to the officers. The souvenirs were distributed by Miss. E. J. Ross, who throughout the war closely identified herself in many ways with the men serving; and Colonel G. C. [sic – L.] Thomson expressed the thanks of the recipients for the gifts.

Owing to the weather, dancing in the open was not possible, and Mrs. Pauling placed the swimming pool at the disposal of the committee. The day’s proceedings closed with a display of fireworks, a huge bonfire, and the burning of an effigy of the ex-Kaiser. The official committee, stewards, and all helpers are to be congratulated upon a thoroughly successful celebration.

From the British Newspaper Archive : reproduced by kind permission of Reach Plc / Mirrorpix