This event on Effingham Common took place on Sunday September 26th 2010 and was jointly organised by The Friends of Effingham Common (Brian Hendry, Chairman), Guildford Borough Council (Adam Owen, Trees and Countryside Manager) and Effingham Parish Council (Sue Morris, Clerk). Its fundamental purpose was, as in many earlier years, to exercise in public view the various Commoners’ rights; but on this occasion it was decided to make it a more substantial event to encourage wider public interest in the Common’s history and ecology.

The weather was overcast throughout the day but the rain held off until just the point at which the event came to its scheduled end in the late afternoon. Despite these conditions the organisers were surprised and delighted that 296 visitors were recorded at the official entrance points, besides many more who went unrecorded. 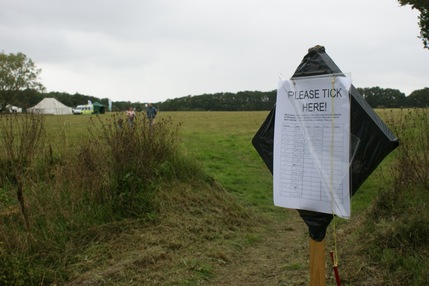 “Sign-in” sheet for visitors at one of the entrance points.

On this page you can read more about the day’s events and enjoy looking back on it through our photographs (by Liz Hogger and Jessica Page) and video clips (by Yvonne Shaw and Chris Hogger).

This document, distributed by the Clerk to Effingham Parish Council, shows how much preparation went into these events.

Two posters were produced to advertise the day and to indicate the programme of events; the first was of a preliminary nature and the second was more detailed. Both of them display old photographs dated “1920” but we now know that these were taken some years earlier.

Some documents were made available at the event to provide context for visitors.
They included a one-page article A Short History of the Common written by Jessica Page.

Two others were provided by Guildford Borough Council:

Two of the organisers – Brian Hendry and Peter Bergman (respectively Chairman and Secretary of The Friends of Effingham Common) – heroically slept in them during the preceding night in order to safeguard them. The smaller of the marquees (shown right) contained displays by the Effingham Local History Group. 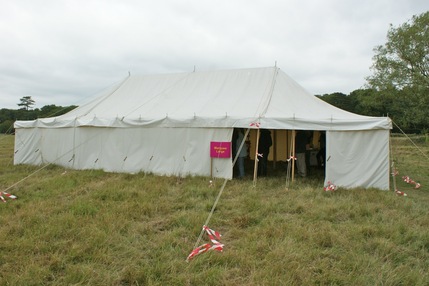 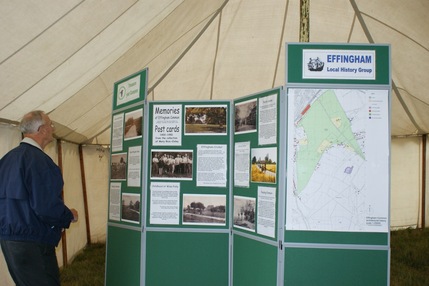 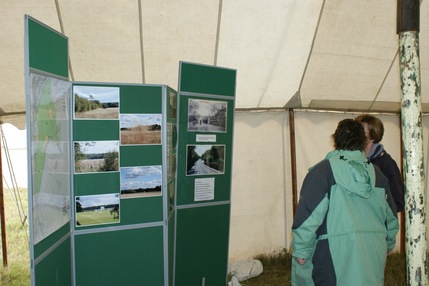 These two buttons show the Recollections and Character Quotes.

The larger marquee  (shown right) contained three displays: firstly, of works for sale by local artist and resident Louisa Botley, the proceeds from which were contributed to orphanages in Kenya; secondly, of the findings of a term-long wildlife project carried out on the Common by Year 4 pupils at St. Lawrence Primary School and supervised by their teacher Gill Witter; and thirdly, of items describing  the valuable work of the Effingham First Responders who, led by resident Craig Chitty, provide life-saving 24-hour First Aid cover across the parish – the day before, Craig had abseiled down Guildford Cathedral to raise money for the group. 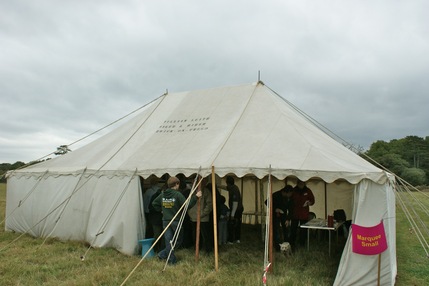 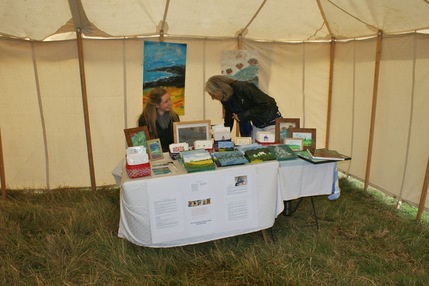 There are four properties on the Common having commoners’ rights; their locations can be seen on our main Commoners’ Days page. On this occasion the rights for all four were exercised to some extent, either by their occupants or by proxy. The total number of animals grazed was less than the sum of all the animals listed in the rights of all the properties and they were grazed or tethered on a representative area of Common rather than on the specific areas to which their individual rights pertained.

The animals taking part were: horses, including a “docile” cob and a Shetland pony (see right); two donkeys “Joey” and “Potter” on loan from Merrist Wood (Joey was a rescued beach donkey aged about 8 and Potter was aged about 7); two goats (not strictly mentioned in the registered rights) named “Gaia” (an Anglo Nubian) and “Gwen” (a Pygmy), both born in 2009; three sheep comprising “Flop” (X breed) and “Josie” and “Jocasta” (Jacob breed), also born in 2009; two Irish Moiled Cattle cows “Dapple” and “Grace” with calves at foot; and three geese comprising two from the rare Steinbacher breed together with their friend, a Brecon Buff. All these animals, apart from the horses, were brought to the Common by Adam Owen’s team from GBC. 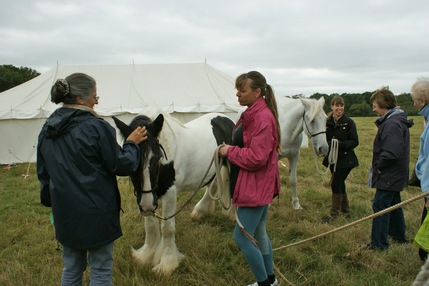 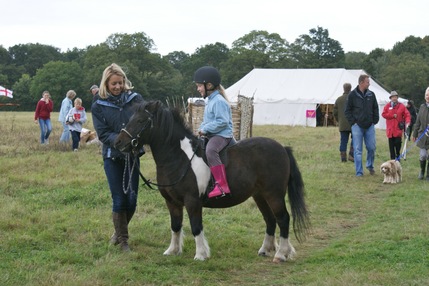 It is known that fairs used to be held on commons, the obvious locations near many villages because they were wide, flat and open. At such events many crafts, skills, sports and recreations would have been seen, including juggling. We were fortunate on this occasion to have  artist and juggler Hattie Hyder (seen here at the left of the image in traditional juggler’s costume) to demonstrate her skills and to teach some of them to the visitors. The important agricultural skill of hurdle and fence making was meanwhile demonstrated by Rob Stringer, who has given similar demonstrations at several recent GBC countryside events. A traditional cricket match was staged throughout the afternoon by Effingham Cricket Club, who also kindly provided welcome barbecue food and refreshments. Finally, given that commons were often used in the past for archery practice, we were fortunate to have with us longbowman Paul Messett – a member of the Company of Yeoman Archers, a not-for-profit body that raises monies for the Charities of the Armed Services – to demonstrate his skill and to provide visitors with on-the-spot tuition. 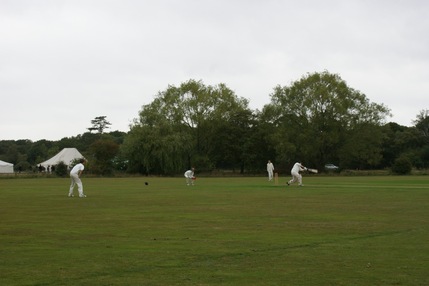 Two guided tours, led jointly by Adam Owen and Sue Morris, were arranged for visitors during the afternoon, focussing on the special features of the Common’s history and ecology. They began with introductory talks next to the GBC information point (shown right) where there were many related pamphlets and documents on wildlife and land management in the Borough.

Sue’s talk used a diagram to illustrate the extent of the Common, its historic division between the two manors and the locations of the four properties with rights. She explained that what makes Effingham Common special compared to many other commons is that it still has these rights, which became registered only after a hard-fought twenty-year campaign by parishioners. She noted the fact that the Common is privately owned and that the general public do not have the right to do what they want there; the right to roam is limited to people on foot, whilst dogs cannot roam in the breeding season because of ground nesting birds. The role of common land historically was for cottagers to be able to graze animals supplementing their diet or household economy and working as transport animals (e.g. donkeys).

Adam’s talk explained that the Common presents a variety of different ecological habitats and environments – woodland, grassland, wetland, ponds and water courses – which each benefit from different management techniques. He pointed out that the Common on the eastern side of Effingham Common Road has not been mown or grazed and is going over to scrub, which the main Common would also rapidly do if not actively managed. He then gave examples of some of the wildlife to be found here and discussed how one could maximise the chances of obtaining the widest range of wildlife, viz:- by leave the grass at different lengths and by cutting the wooded edges back in ‘scoop’ shapes rather than in straight lines. He explained why reintroduction of restoration grazing would help with both the wildlife and the management of the land. Consideration was being given to re-excavating the overgrown pond, to expand the opportunities for wildlife. More generally, he noted, the Borough is keen for local people to report information about the wildlife (e.g. the species seen) and to protect and enhance it.

Use the buttons to view some very brief small-frame video clips of the event taken during the afternoon. The rumbling sounds on them are just the high wind!

They are all in .mp4 format and – depending on your browser – may open automatically or offer a download option.