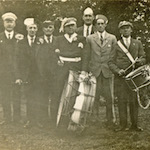 It is probable that at the start of 1937 the memory of village life still most vivid in the minds of Effingham’s residents was of the celebration they had held nearly two years previously, in May 1935, of the Silver Jubilee anniversary of King George V’s coronation. The King, however, had been in poor health ever since a riding mishap in 1915, this followed by years of respiratory problems together with a bout of severe septicaemia. In his last years he had had to depend for the exercise of many of his duties upon his first-born child Edward, Prince of Wales. He died just before midnight on January 20th 1936, having been discreetly euthanised with lethal injections administered by his chief physician.

Edward, being first in line, immediately became King. He had not married but had instead been embroiled for many years in affairs with various married women, one of whom introduced him in the early 1930s to the American Mrs Wallis (née Spencer) Simpson, now in her second marriage after an earlier divorce. By late 1936, less than a year into his reign, Edward had decided to marry Wallis – once she had divorced her present husband – and continue as King, but the opposition and constitutional impediments to this intention proved insurmountable, leading Edward to abdicate in the December.

Almost immediately the throne passed to his younger brother Albert (“Bertie”) whose regnal name was chosen to be King George VI. His Coronation was scheduled for May 12th 1937.

The Royal Family, members of foreign royal families and heads of state processed in separate groups in the time-honoured way from Buckingham Palace to Westminster Abbey. The last and largest procession was that of George and his wife Elizabeth, in the Gold State Coach, who arrived at the Abbey at 11am. The Archbishop of Canterbury then performed the Coronation Service, first crowning George and then Elizabeth. The scene is captured in this painting by Frank Owen Salisbury: 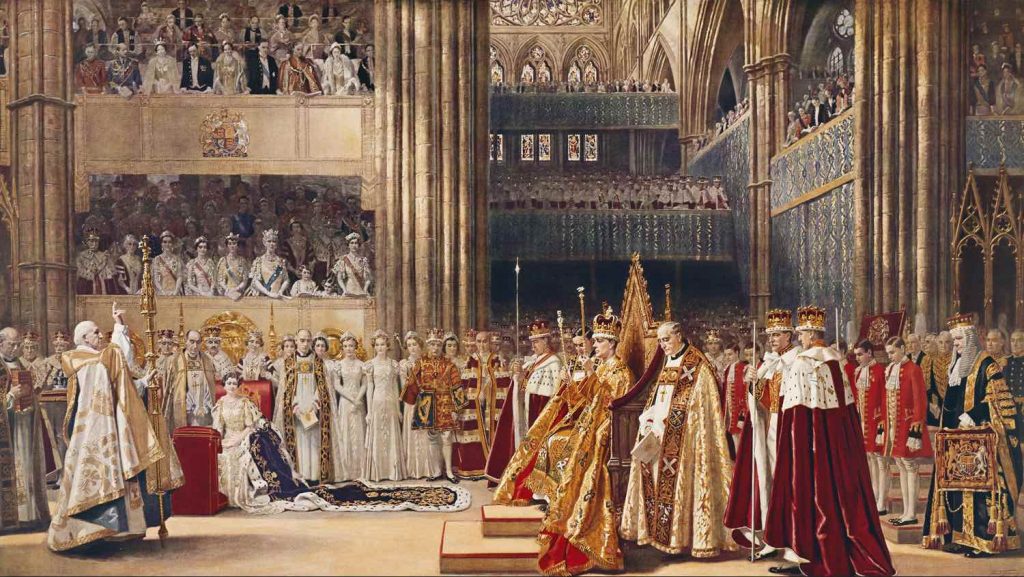 The King and Queen then processed from the Abbey through London back to the Palace. A direct route from the Abbey to the Palace is only about two thirds of a mile, but this State Procession was nearly ten times longer than that, much longer than in previous coronations. Lining the route on either side were more than fifty thousand troops and police officers.

The following photographs (all public domain) show highlights of the service, the procession and the appearance on the palace balcony. Additionally a lengthy Pathé film on YouTube, presenting the entire proceedings, can be watched here. 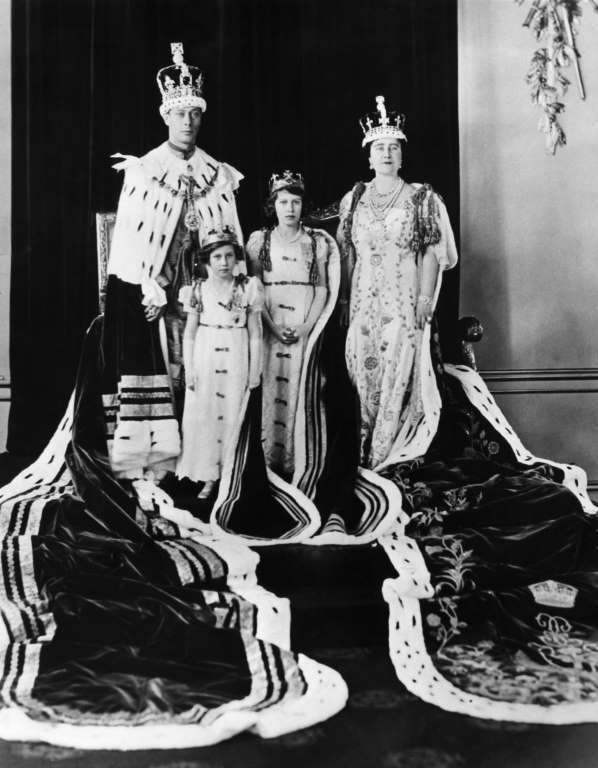 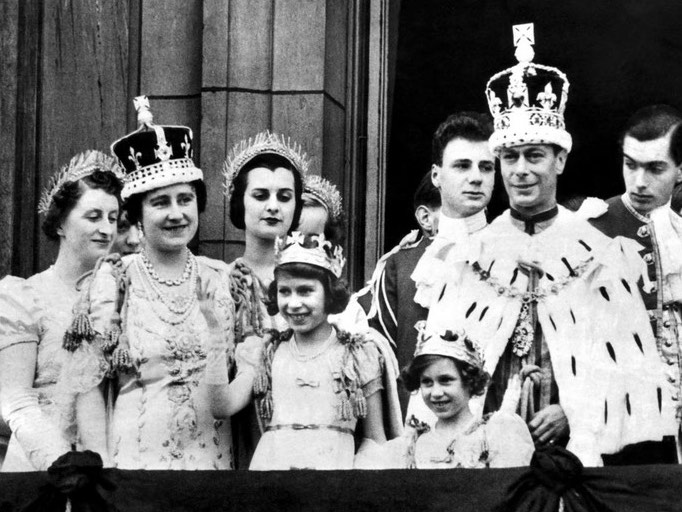 Left: the King and Queen in their Coronation robes together with their daughters Margaret and Elizabeth.

Above: on the balcony after returning from the palace. 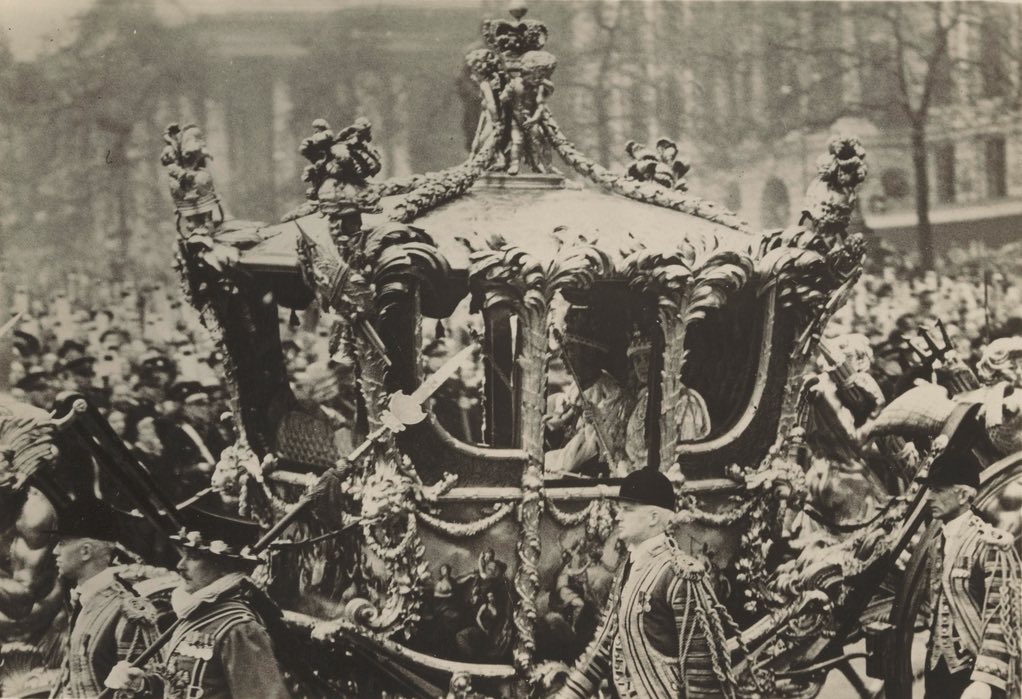 Left: returning from the Abbey in the Gold State Coach.
(click to enlarge)

From the school log book we see that the children had three days’ special holiday – May 12-14th – to mark the Coronation, followed by their usual Whitsuntide holiday:

In this period the local school – eventually to become St Lawrence Primary School – was called simply “Effingham Council School” and its head teacher was Mr Joseph Stewart Adams who lived in the adjoining School House with his wife Florence, the school Governess.

One detailed account we have of Effingham’s celebrations is provided in the following newspaper article: 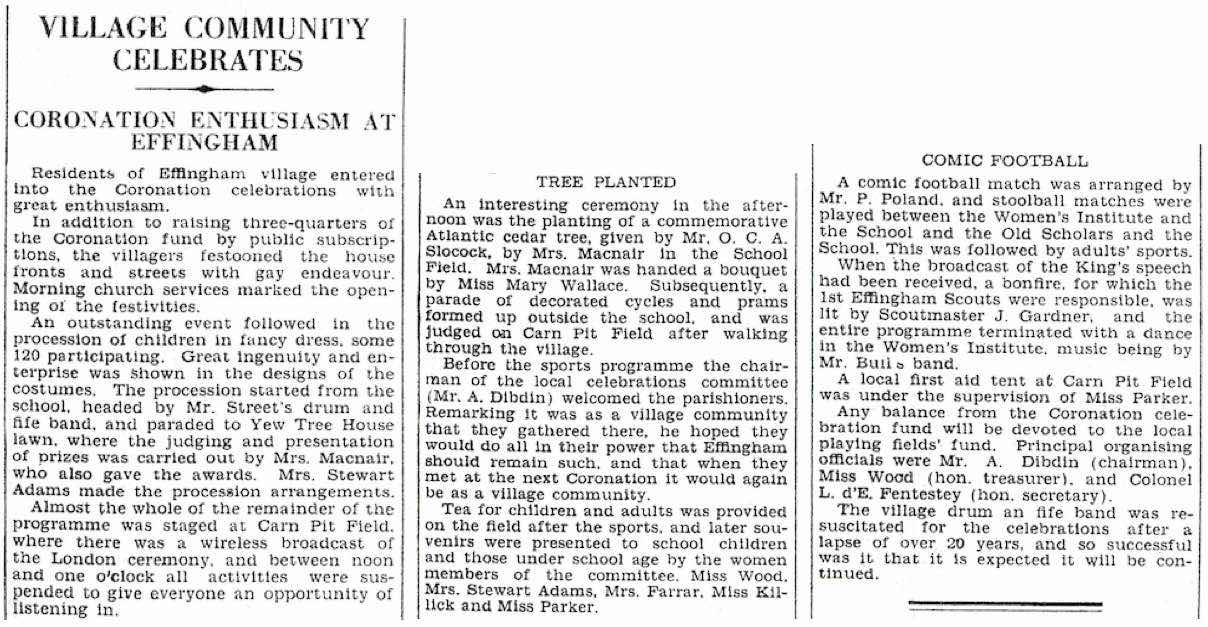 The Surrey Advertiser and County Times: publ. May 15th 1937.
From the British Newspaper Archive : reproduced by kind permission of Reach Plc / Mirrorpix

From this account it is clear that the activities were as varied and engaging as they had been in the Silver Jubilee celebrations two years previously, contrary to the recorded recollection of the late Mrs Lena Bridger that “the Coronation of King George the Sixth was not so involved, just a tea party for the children”.

The venue for the main activities is given as Carn Pit Field. The location and naming of this site are examined on a separate page on this website bearing the title ‘Madge’s Field‘.

The above article’s last paragraph states that the band had been “resuscitated … after a lapse of over 20 years”, but this is certainly mistaken: the band had featured prominently (and been photographed doing so) just sixteen years previously, in the Peace Celebrations of 1919. Our archives also hold photographs showing the band assembled for some other occasion and bearing the date 1920.

We are fortunate also to have in our archives this photograph showing “Mr Street’s drum and fife band” at this 1937 celebration: 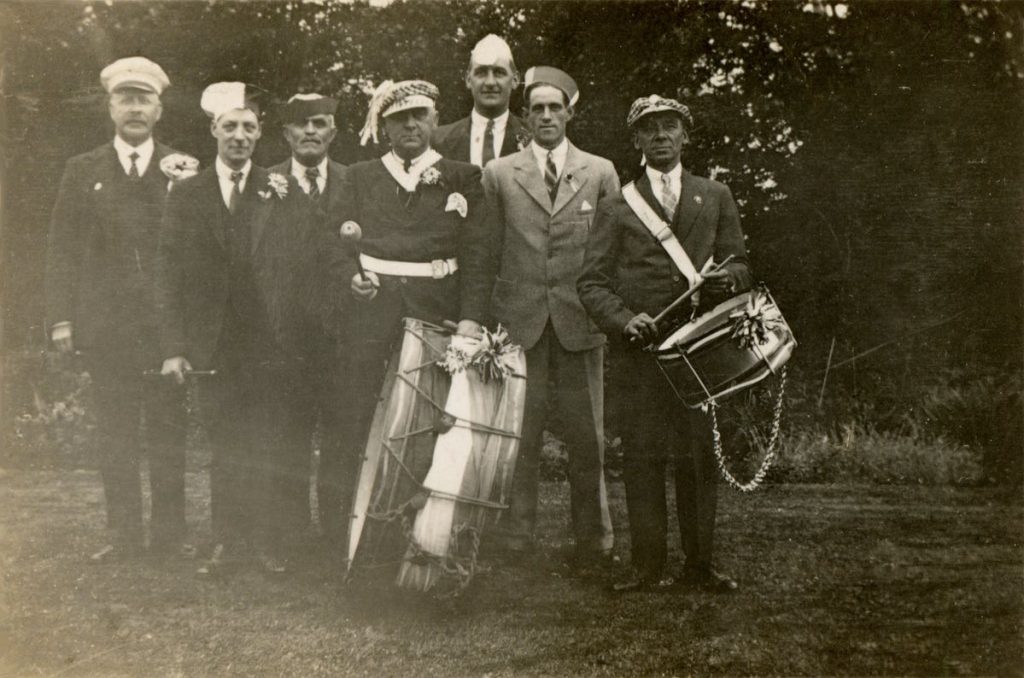 A local resident has provided for us the surnames of the persons seen here, from left to right, as follows:

Their full names and addresses at that time were:

The Lodge Gardens, Church Street – this bungalow, demolished in the 1960s, stood in the eastern corner where Church Street meets Lower Road.

Forge House, Church Street – this property was formerly a pub, The Blacksmith’s Arms, since demolished and replaced by a similar building.

No. 1, Plough Cottages, Orestan Lane – this terrace of cottages, since demolished, stood just east of The Plough Inn.

“The Elms”, Orestan Lane – later this would become the home of Mr Street in his retirement.

Here is another photograph of the band, taken probably in or near the Carn Pit Field: 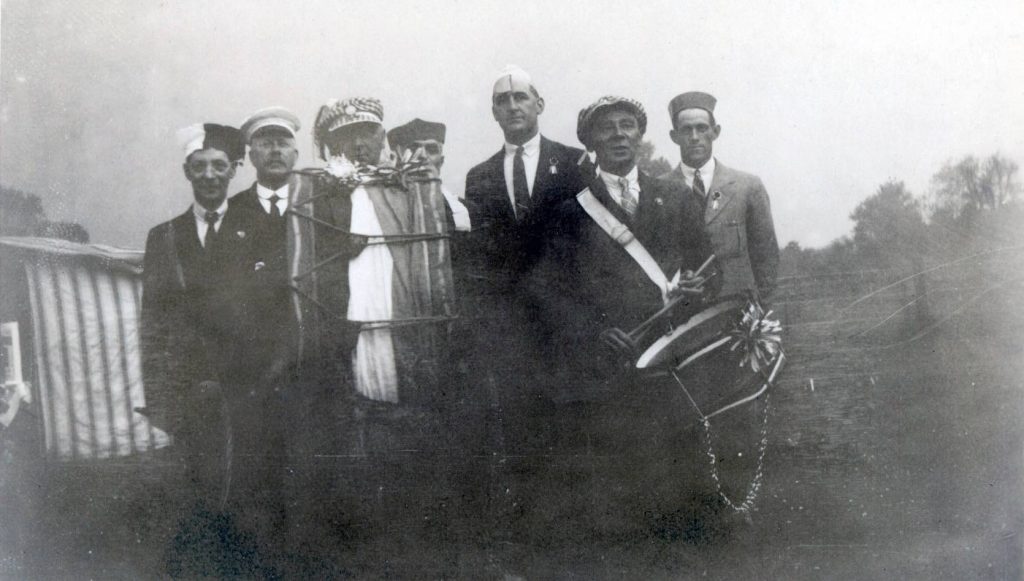 Another rich source of detail is the Programme of Celebrations, which can be viewed in full via this button: 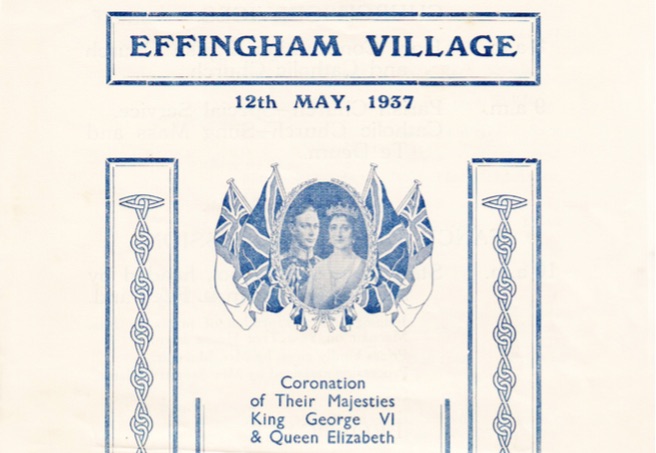 This Souvenir Programme of Celebrations provides a similar level of detail about the activities in Bookham, Fetcham, Leatherhead and Ashtead: 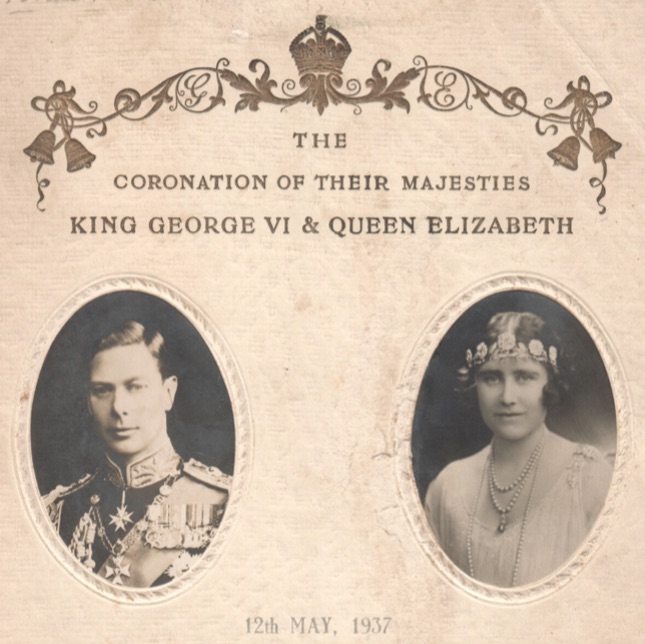 Two other brief descriptions of Effingham’s celebrations are shown below, one taken from an article published in May 1937 (precise date unknown) by The Dorking and Leatherhead Advertiser and the other taken from an essay “My career in the Effingham School” written by a pupil Margaret Mary Nicholls on April 1st 1938 when she was aged about 14:

The Coronation celebrations in Leatherhead district will not soon be forgotten.

Some idea of the crowds that gathered can be found from the fact that 930 bottles of milk were distributed to the children.

A feature of the Effingham celebration was the resuscitation of the village Drum and Fife Band after a lapse of nearly 20 years.

Effingham is one of the very few villages with its own band.

We have not heard of anyone celebrating the Coronation in as strange a way as a Coronation was celebrated at Leith Hill a 100 years ago.

On the June morning of Queen Victoria’s Coronation Day, Edward Fitzgerald, James Spedding and Sir Frederick Pollock journeyed to Leith Hill and when distant guns proclaimed that the crowning had taken place, they all flung themselves into a duck pond and sang “God Save The Queen”. 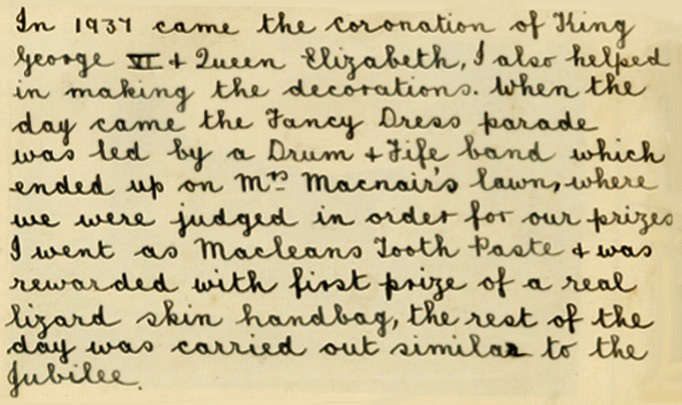 The comic football match was timed to start at 5.45pm and had been organised by Mr. Edward Philip (“Phil”) Poland. His family lived at No. 2, Church Street. He is seen at the centre of the following photograph wearing a broad-brimmed hat. The man immediately left of him is Peter Edward (“Bunny”) Loxley and the man standing at the rear (behind the person wearing a Union Jack) is Edward Henry James (“Jim”) Tyrrell. The left-most man in the group is Peter James (“Jim”) Patrick Nicholls, born in Effingham in 1919, who was dressed as a “groom” with the man next to him wearing a brightly patterned dress as his “bride”. Jim Nicholls was later to die on active service aboard HMS Chakdina on 5 December 1941. Two of Phil Poland’s brothers also died on active service in the second world war. 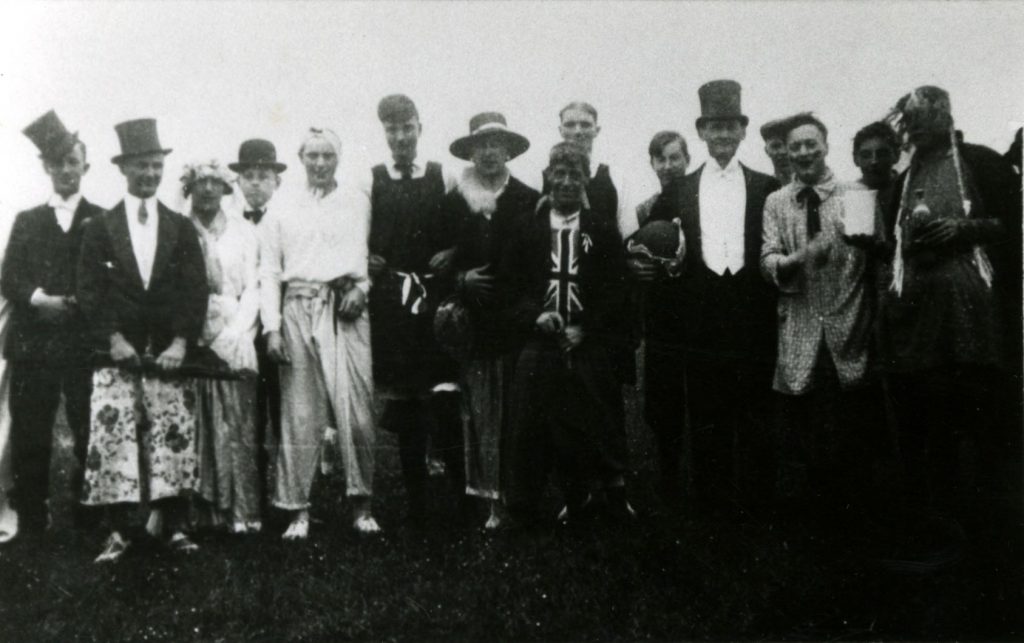 At right is another picture showing Phil Poland at centre flanked by Bunny Loxley and Jim Tyrrell. In later years Bunny Loxley ran the shop at Effingham Golf Club. 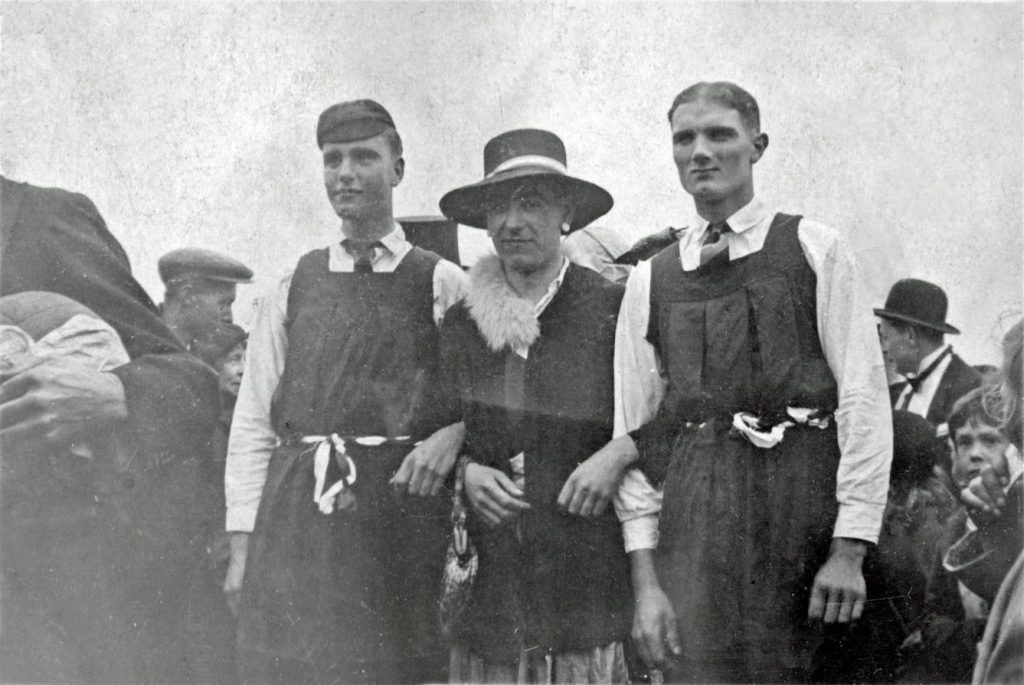 We can let Joseph Stewart Adams have the last word, with an entry in his school log book almost a fortnight later, on May 25th which he observes to be Empire Day. He mentions that the school has re-opened after the Whitsun break and then states that Mrs MacNair had planted a “Coronation tree” Cedrus Atlantica Glauca in the school field. This must have been a reference back to Coronation day itself (not to the 25th) since the tree had already been planted as part of the celebration, as reported in the May 15th newspaper report.