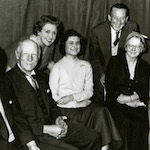 Wilfred Pickles was a Yorkshireman born in 1904 who rose to become one of the nation’s best-known showbusiness personalities, having an extensive career in acting, presenting and broadcasting. In his early adulthood he had joined his father’s building trade, but involvement in amateur dramatics channelled his skills and enthusiasms towards an entirely different kind of life. He undertook various acting roles during the 1920s. By 1930 he had been engaged by the BBC and had married Mabel Cecilia (née) Myerscough, whom he had met through the amateur dramatics. He worked for a long period as a radio actor and as an announcer for the BBC’s Northern Service and then, when the second world war came, as a London-based newsreader for the Home Service.

Shortly after the war, in 1946, the “Have a Go!” series was launched on the BBC’s Light Service, the idea having been proposed by a Programme Assistant Philip Robinson who had been asked to suggest a new form of quiz programme involving public audiences. The first episode was broadcast in February 1946 with an audience from Bingley in Yorkshire. 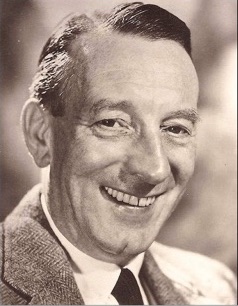 For many years the episodes were recorded and then broadcast at a later date, but in 1953 live broadcasting of the show was introduced.

You can listen here to the first live broadcast in 1953
(© British Broadcasting Corporation).

Theme and words by Jack Jordan

“Have a go, Joe, come on and have a go
You can’t lose owt, it costs you nowt
To make yourself some dough.
So hurry up and join us, don’t be shy
and don’t be slow.
Come on Joe, have a go!”

The show continued for more than two decades, the broadcasts often being heard by up to twenty million listeners, and ended in 1967. During this period Wilfred featured in many other radio, television and acting roles as well.

Wilfred and Mabel produced just one child, a son David, who contracted polio and died at age 7. This devastating loss clouded the rest of their lives behind the outward jollities of their public career and motivated them to pour much energy and resource into children’s charities. Wilfred was awarded the O.B.E. in 1950 for services to broadcasting. He died in 1978 and Mabel in 1989.

The Format of Have a Go!

Wilfred’s almost invariable opening line in each show was “Ow do, Ow are yer?” and he would greet young unmarrieds with the question “Are yer courtin’?”. The venue was typically a village or town hall, a school, theatre or factory or suchlike. A handful of contestants from the local community would be up on a stage in front of microphones with Wilfred, facing a large seated audience. His wife Mabel would be behind, facilitating in various ways as the show went on. The producer from 1947 onwards was Colehan Barney. Musical accompaniment was often provided by Violet Carson, a fine pianist and soprano who later would become better known for acting the character of Ena Sharples in “Coronation Street”.

Wilfred would invite the contestants to relate anecdotes about their lives or experiences, bringing in audience participation as well, and would pose quiz questions to the contestants. Successful answers earned them modest amounts of prize money, which doubled each time. The final “jackpot” prize was under £2. As the show proceeded Wilfred would find opportunities to deploy his rhyming catch-phrases “Give ‘im the money, Barney” and “How much money on the table, Mabel?”

It is difficult to find any account of how the programme makers first approached a community targeted for the show and, in particular, how and at what stage the contestants were selected. Perhaps they first identified a suitable venue and invited its owners to host the event. Or, they may have first contacted leading figures in the community and relied upon them to come up with a venue. However this may, by one means or another Effingham was chosen in 1957 and its pre-selected contestants – six altogether – were assembled for the show at the Howard of Effingham Council Secondary School (as it was then called) at 7.30 on the evening of Tuesday February 5th, ready for the action to begin.

The event had been advertised in The Radio Times, in two slots: the live recording on the Light Programme on the 5th and a re-broadcast on the Home Service on the 9th: 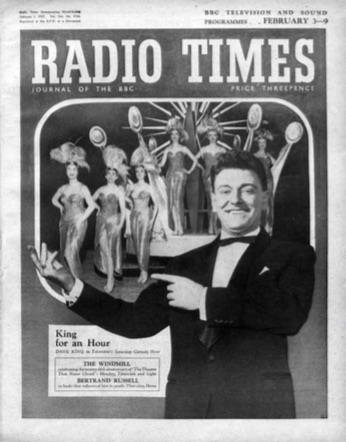 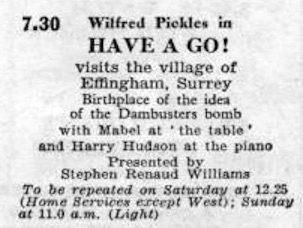 View the clippings in context here:
(from the BBC Genome Project)

Have a Go! in Effingham

Our knowledge of this comes mostly from an article, with photographs, published in a local newspaper a few days later, together with a little more detail from one or two residents who have related their memories of it. The newspaper’s headlines were certainly positive: 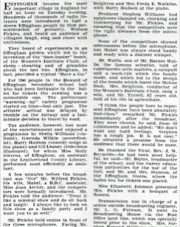 The article announces that:

“Effingham became the most important village in England for half an hour on Tuesday evening.”

and tells us that there were three hundred residents in attendance, having secured their tickets by a ballot box held at Stanton’s stores in Church Street. There were six contestants:

son of Dr Barnes Neville Wallis and then living with his parents at White Hill House, Beech Avenue

then living at “Glencar”, Orestan Lane

daughter, aged about 15, of Eric and Mabel then living at “Loxfold”, Guildford Road, Gt. Bookham

The article was accompanied by several, slightly overlapping photographs with intermingled captions. For ease of presentation here these images have been teased apart and their captions retyped: 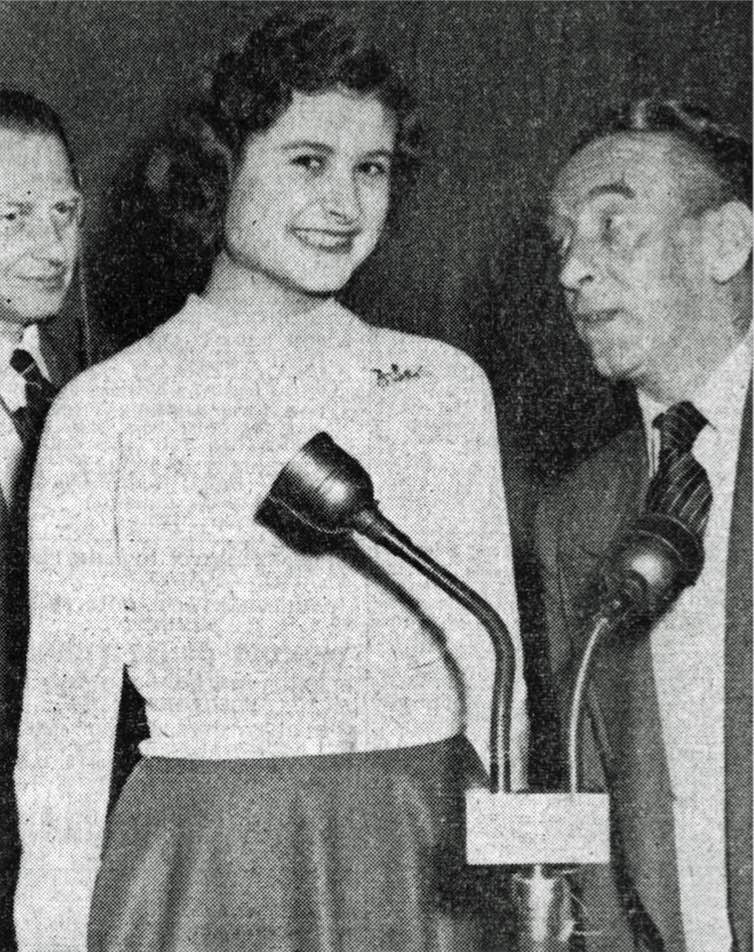 Above: “Are you courtin?” – Bridget Boxall represents the younger generation in the broadcast.

Far right: A bouquet for “Mabel”, after the show, presented by Elizabeth Johnson.     [Reynolds Photos] 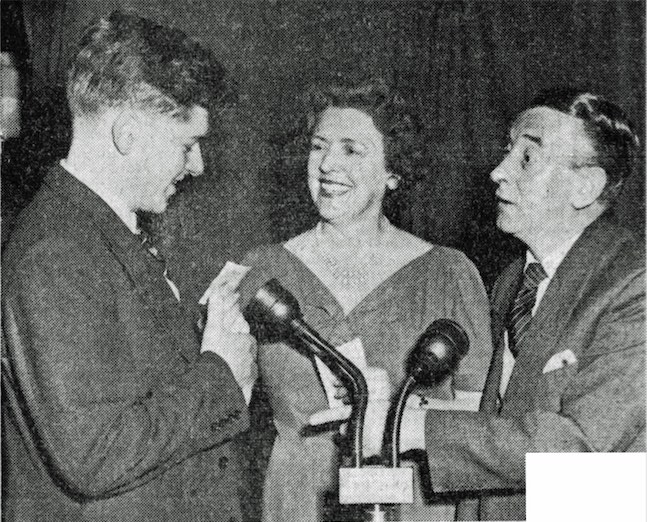 Above: Mr Christopher Wallis, son of Dr. Barnes Wallis, Effingham’s most famous resident, had an interesting story to tell of experiments in the garden which led to his father’s invention of the dam-buster bomb.

Right: “The trouble with shearing sheep is, they stink.” – Mr. Henry Tyrrell, aged 82, was a great success with the audience.

Click on the image at right to see a high-quality version lent to us by a resident. 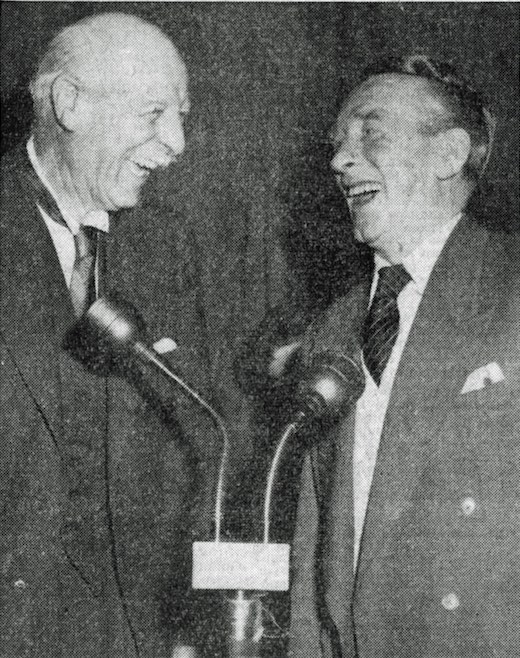 The photograph below was also supplied by a resident and shows five of the six contestants, these being (seated, left to right) Christopher Wallis, Henry Tyrrell, Bridget Boxall, Lena Bridger and Dorothy Deighton, with Mabel and Wilfred standing behind them. At the extreme right is a glimpse of the coat worn by the sixth contestant Freda Watkins. So as not to leave her out, a separate image is shown alongside of Freda in the audience watching the preceding variety performance. 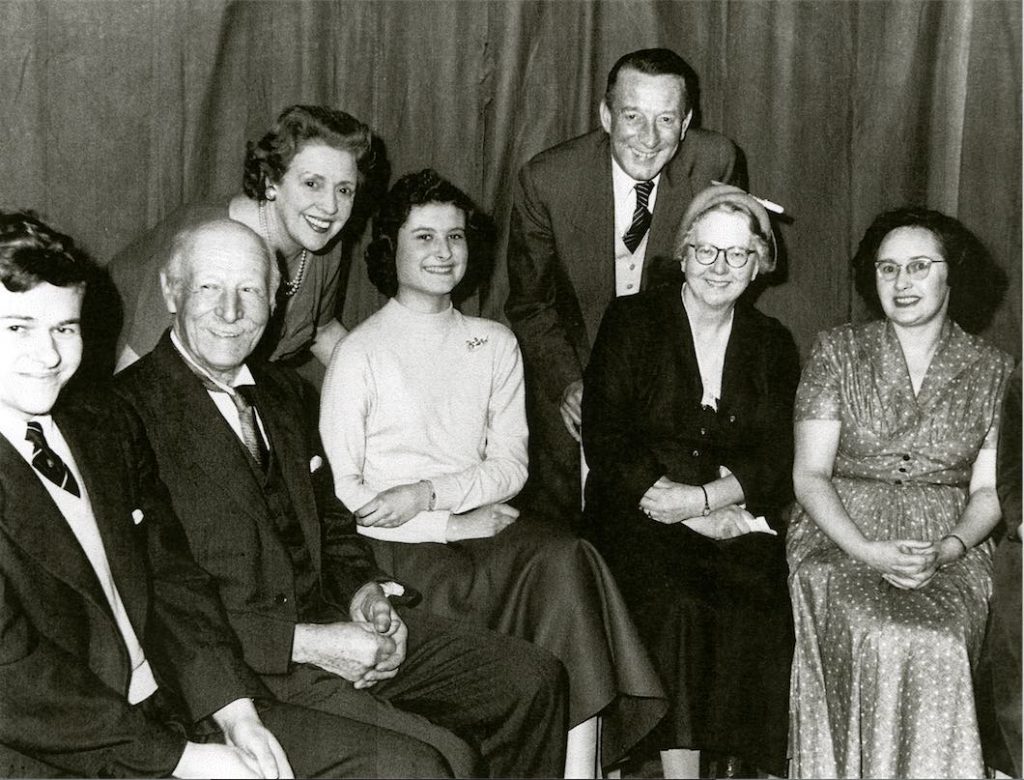 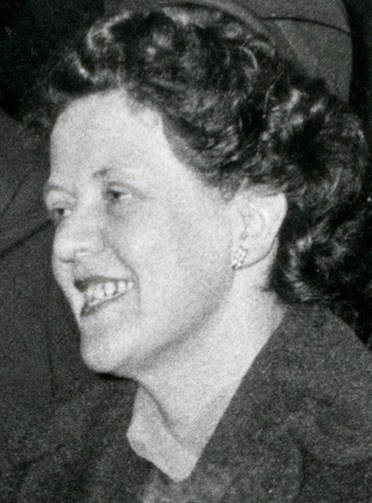 It was standard practice before the show went live on air that Wilfred and his team would provide some warm-up entertainment for the audience. The above article says that in Effingham’s case this “variety performance” featured a violinist Sheila Williams, an accordionist Gwenda Wilkin, a comedic singer and pianist Harry Hudson and a television illusionist Gil Leaney.

Below is a photograph taken during this performance of a section of the audience, who were clearly taking much pleasure in the humour of the occasion: 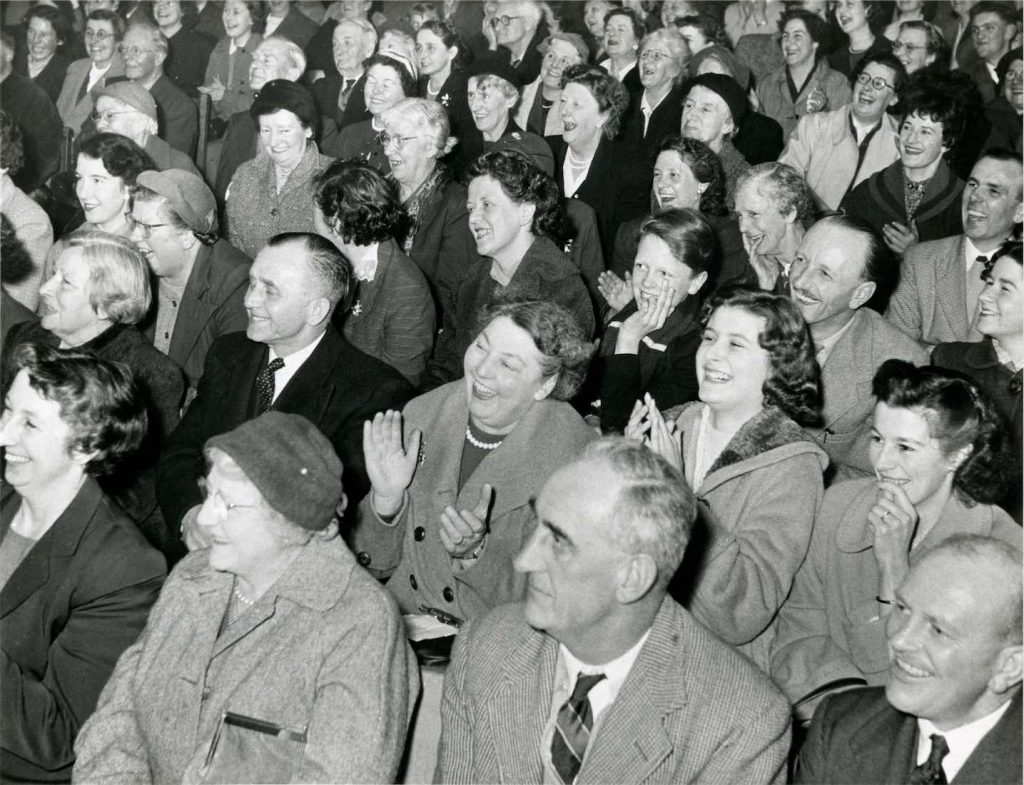 Identifications of many of those seen above can be viewed here:

Miniature Have a Go! at the Primary School

On the morning of the Tuesday February 5th 1957 Wilfred and Mabel visited the primary school (today’s St Lawrence school). The name of the school at this time was Effingham County Primary School, having been so-named since April 1945. The pupils referred to it as “Eggs, Chips, Peas and Sausage” from its initials. Frank Watkins had been the head teacher here since May 1948.

The visit was noted by Mr Watkins in the school log book as follows:

During this visit Wilfred and Mabel staged a “miniature” version of the show and the above newspaper included these two photographs: 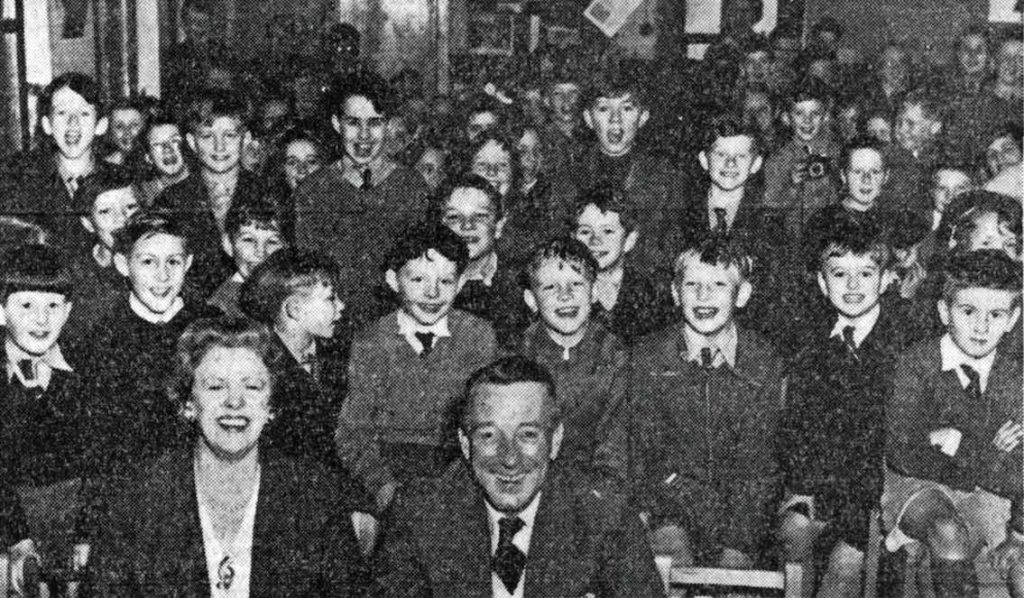 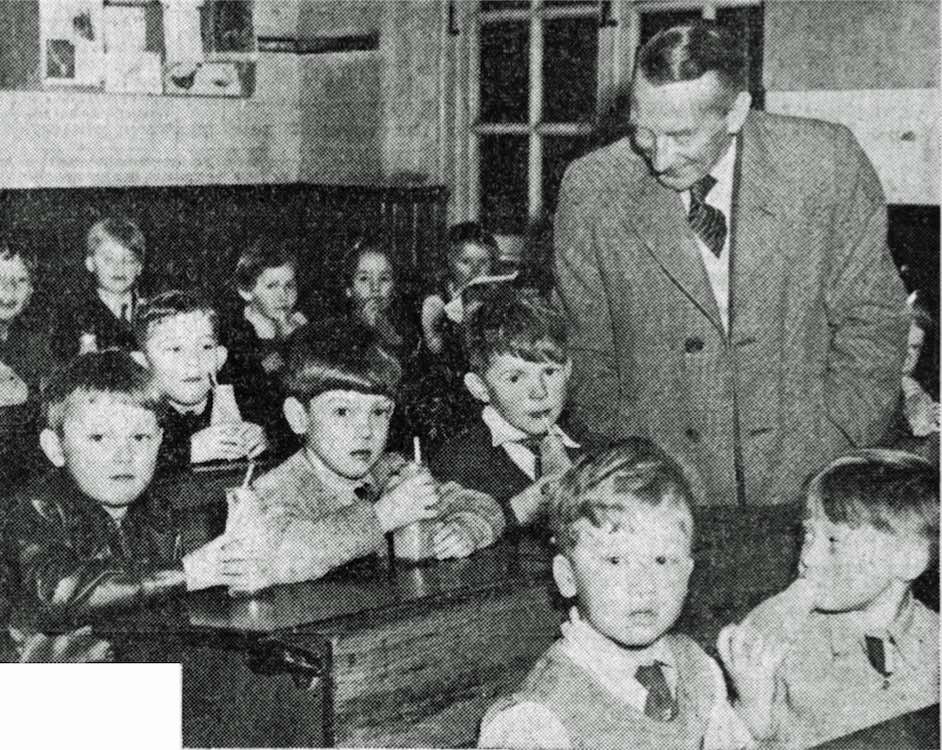 Captioned: On Tuesday morning Mr. and Mrs. Pickles visited Effingham County Primary School and staged a miniature “Have a Go” for the children. Nicholas Swift, Stephen Drew and Michael Wells are in the front of the picture above. 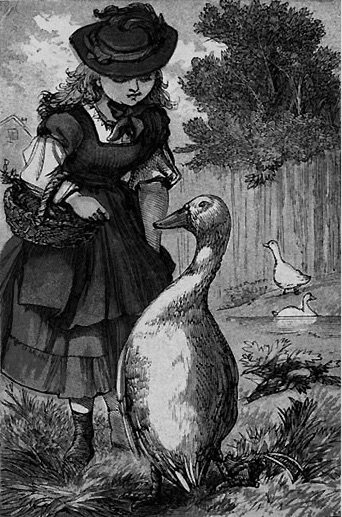 Finally, the former Effingham resident who supplied the photograph and identifications for the evening variety performance had been a pupil at the primary school at the time and had been chosen as a contestant for the miniature show. She recalled: