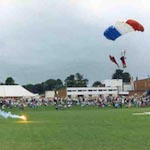 In 1988 Effingham celebrated the 400th anniversary of England’s defeat of the Spanish Armada. The celebrations were spread over more than a fortnight, culminating with a special Victory Celebration held on July 16th 1988 and remembered by many as simply “Armada Day”.

Besides the nation’s general reasons for marking this event, our village had its own special reason for doing so: the Lord High Admiral of the fleet was Charles Howard, the 2nd Baron of Effingham, born in 1536 to Margaret, the wife of William Howard. William was granted the Manors of Bookham and Effingham in 1551 by King Edward VI and a few years later became the 1st Baron of Effingham. His Effingham manor house is generally thought to have been on the site of the property now named Browns in the centre of the village, although his main residence was Reigate Priory.

Charles was appointed Lord High Admiral by Queen Elizabeth in response to the imminent threat posed by the King of Spain’s “Invincible Armada”, commanded by the Duke of Medina Sidonia, which set sail in late May 1588 with the intent of invading England. The English fleet of 180 ships, commanded by Francis Drake, engaged the Armada on July 1st to begin a 9-day battle in the Channel. Seriously weakened by this long exchange, the Armada then anchored at Calais where on August 7th it was further damaged by English fireships. The remaining Spanish ships subsequently escaped up our east coast and many were then forced ashore in Scotland and Ireland, culminating in total defeat.

Lord Howard’s flagship, the Ark Raleigh (later Ark Royal), played a leading role during the battle in the channel and its emblem – the figure of a galleon – has been adopted by many Effingham organisations in their literature.

Effingham’s commemorative events began on June 29th 1988 and continued up to Saturday July 16th, the main day of the Armada Victory Celebration. A procession of floats, many with a naval theme, was led to the King George V Playing Fields by the cadet band of the Royal Marines Light Infantry, following which the Rt. Hon. the Earl of Effingham officially opened the ceremony. This programme of events for the main day of celebration was edited by Antony D. Page who, with others, played a major role in planning and organising the event.

A low-resolution scan of it can be viewed or downloaded using the upper button (pdf, 5Mb).

A quick view of the pages summarizing the fortnight’s schedule and the arena displays on the main day can be viewed using the lower button.

Many events took place in the days leading up to the main Armada Day, among them competitions and exhibitions. The photograph below shows models of naval ships submitted by local children for a competition; at the stall, next to St. Lawrence Church Hall, are Derek Hubbard (seated) and Jessica Page. 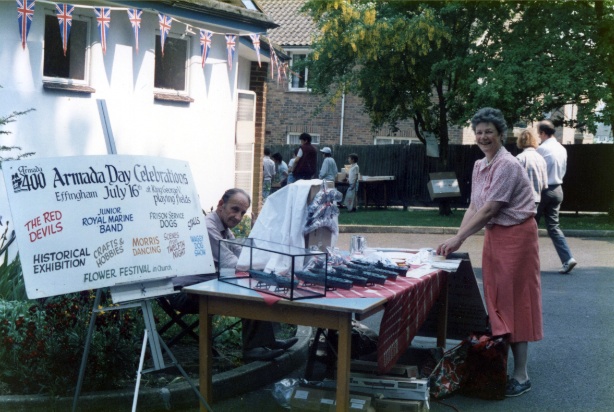 The Procession on July 16th first assembled in the car park of the Howard of Effingham School, then proceeded west along Lower Road to reach the lower end of The Street. From there it went right up The Street to the main crossroads, turned left down the A246 and entered Browns Lane, thence arriving at the entrance to the King George V Playing Fields, the chosen arena for the day’s events. Some pictures of the arrival there are shown in this gallery (click thumbs to enlarge):

The Royal Marines Light Infantry cadet band assembled in the KGV arena as the Earl of Effingham, at the centre of the balcony, opened the ceremony:

A selection of these is presented in the following gallery: 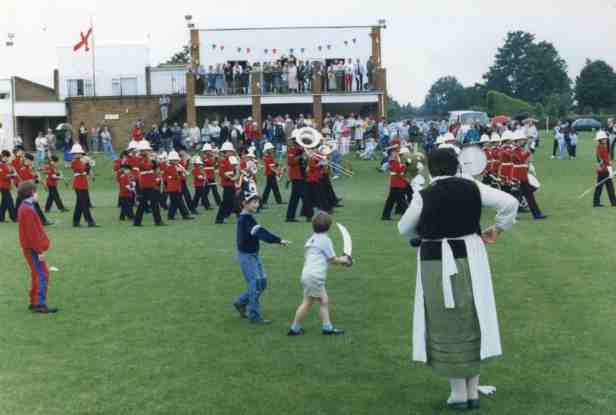 These two articles were published on July 21st 1988 in The Leatherhead Advertiser and can be viewed using the buttons opposite.
Reproduced by kind permission of Reach Plc / Mirrorpix

The following account of the event was written twenty years later by Antony D. Page.

In 1988 the village celebrated the 400th anniversary of the Armada victory with events spread over 18 days, almost certainly the most ambitious and extensive village event ever staged. It began with a Golf competition on 29 June at the Effingham Golf Club and culminated in ecumenical services in our churches on 17 July, preceded the day before by a series of displays in the KGV Fields.

The idea was proposed by Tony Cockle (the then Vice-Chairman of the Parish Council) in 1984, and took us by surprise since 4 years was a long way off. Typically, a committee of all the talents was set up and ideas evolved. Much of the story is told in a special, part-coloured programme, of which a few copies remain in the Parish Room.

Over the 18 days there was an Antique Wireless show organised by Tony Cockle who was a collector  and expert in these matters, a bowls match against Horsley, a flower festival, and – continuing until 22 July – a history exhibition which was borrowed later by a school in Reigate.

On the day itself (16 July) the village streets were closed to allow the procession to proceed to the KGV Fields, led by the Royal Marines Light Infantry Cadet Marching Band, and including village floats, one from the Royal Navy and several others. The parade was welcomed by the Rt. Hon. the Earl of Effingham. He welcomed also the Lord Lieutenant, Richard Thornton, the Mayor of Guildford Cllr. Mrs Cobbett, and our MP Ian Taylor MBE.  Among others present were the Red Devils who dropped in, and our various schools performed – madrigals, maypole dancing – and the evening ended with a hog roast prepared by the Rugby Club, and splendid fireworks sponsored by Ferranti.

Most sadly Tony Cockle died suddenly on 20 June; it was his family’s wish that the show should go on.  The success of all the events was due to the scores of people, not only from the village but from their contacts, even the City of Plymouth, who each and every one made their special contribution.

ELHG holds much more extensive material on this event in its offline archives.