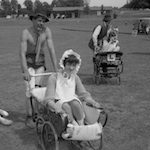 This is the earliest Effingham Village Day for which we have any significant information, although we know that such days had been staged in many previous years in one form or another.

Our knowledge of this event in 1966 comes largely from the Barnes Wallis 80th Birthday Album. This large, elaborate hard-bound work had been assembled by many organisations in the village as a tribute to Sir Barnes for all his many contributions to the life of the village and was presented to him in 1967 when reached the age of 80. It is now in the hands of Effingham Parish Council.

For us, it provides a fairly comprehensive and quite rare resource for learning about Effingham in the 1960s.

The Village Day of 1966 did not actually bear that title at the time – instead, it was termed the “Effingham Fair”. It took place on Saturday July 2nd, a blazing hot summer’s day. The day’s activities began with a comic pram race, described in the newspaper article below which appears in the Album and tells us quite a lot about other features of the day.

In association with this article the Album also describes the Effingham Youth Club which seems to have been formed about two years earlier and had rapidly acquired a membership of over 60 and played a key role in planning, advertising and fund-raising for this and similar village events. In particular it was this club that organised and and acted out this pram race in 1966.

The cutting in the Album has suffered somewhat with age and a few lines have become illegible. A transcription of the text is given alongside. 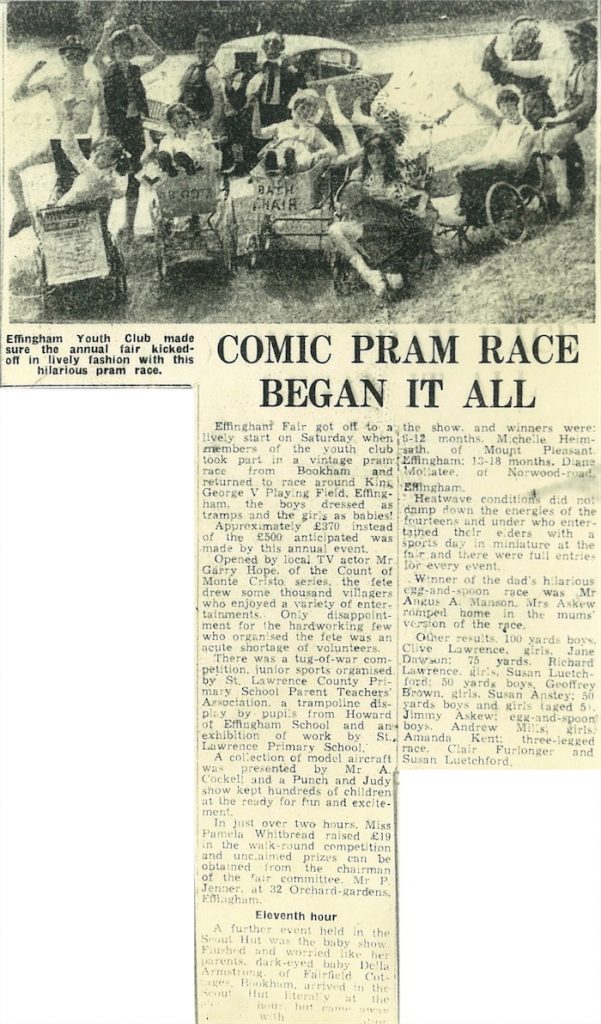 COMIC PRAM RACE
BEGAN IT ALL

Effingham Fair got off to a lively start on Saturday when members of the youth club took part in a vintage pram race from Bookham and returned to race around King George V Playing Field, Effingham, the boys dressed as tramps and the girls as babies!

Approximately £370 instead of the £500 anticipated was made by this annual event.

Opened by local TV actor Mr. Garry [sic] Hope, of the Count of Monte Cristo series, the fete drew some thousand villagers who enjoyed a variety of entertainments. Only disappointment for the hardworking few who organised the fete was an acute shortage of volunteers.

A collection of model aircraft was presented by Mr. A. Cockell [sic– Cockle] and a Punch and Judy show kept hundreds of children at the ready for fun and excitement.

In just over two hours, Miss Pamela Whitbread raised £19 in the walk-round competition and unclaimed prizes can be obtained from the chairman of the fair committee, Mr. P. Jenner, at 32 Orchard Gardens, Effingham.

A further event held in the Scout Hut was the baby show. Flushed and worried like her parents, dark-eyed baby Della Armstrong, of Fairfield Cottages, Bookham, arrived at the Scout Hut literally at the closing hour, but came away … with …

Heatwave conditions did not damp down the energies of the fourteens and under who entertained their elders with a sports day in miniature at the fair and there were full entries for every event.

Winner of the dads’ hilarious egg-and-spoon race was Mr. Angus A. Manson. Mrs. Askew romped home in the mums’ version of the race.

From the article we read that the Fair was opened by Gary Hope (pictured right), a well-known film and TV actor and director who lived in the Guildford area.

The pram race was the opening event. The participants had first had to get themselves and their prams to Bookham, from where they then raced in the heat all the way to Effingham and then around the King George V playing fields. It must have been very physically demanding yet, evidently, was also a lot of fun. 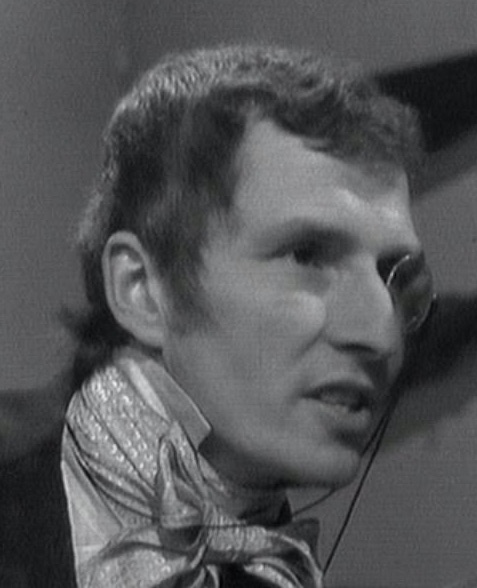 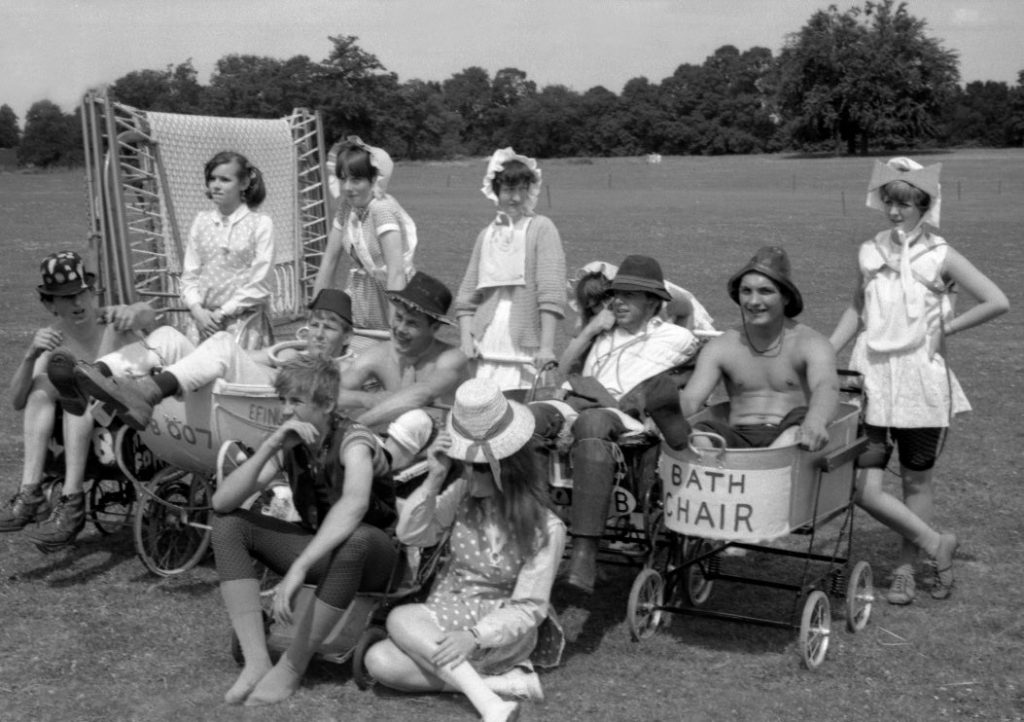 The “Tramps” and the “Babies” relaxing after the race; the heatwave conditions are palpable from the photograph.

This wonderful photograph and about a dozen others were taken by Kathleen Parrish a short while before she married. A keen photographer at the time, she later donated a huge number of scans of her Effingham photographs from this era to ELHG and we are greatly indebted to her. The gallery below presents more of her photographs of this event.

The girl seen at the rear centre of the group was Miss Rosemary A. Hall

This photograph is interesting in several ways, besides confirming the presence of the Punch and Judy show. Firstly it shows the old Scouts hut and, next to but detached from this on the far left, the old hut in which sports clubs kept their equipment.

Secondly, on the right there is a glimpse of the group of commercial properties known as “Covey Island” that once stood on the site of today’s Lindens Close.

Thirdly, we can see in the distance the fence along the perimeter of the playing fields, entirely free of the substantial hedge that grew in later times. In this era there were wholly unimpeded views of the fields from the adjacent roads. 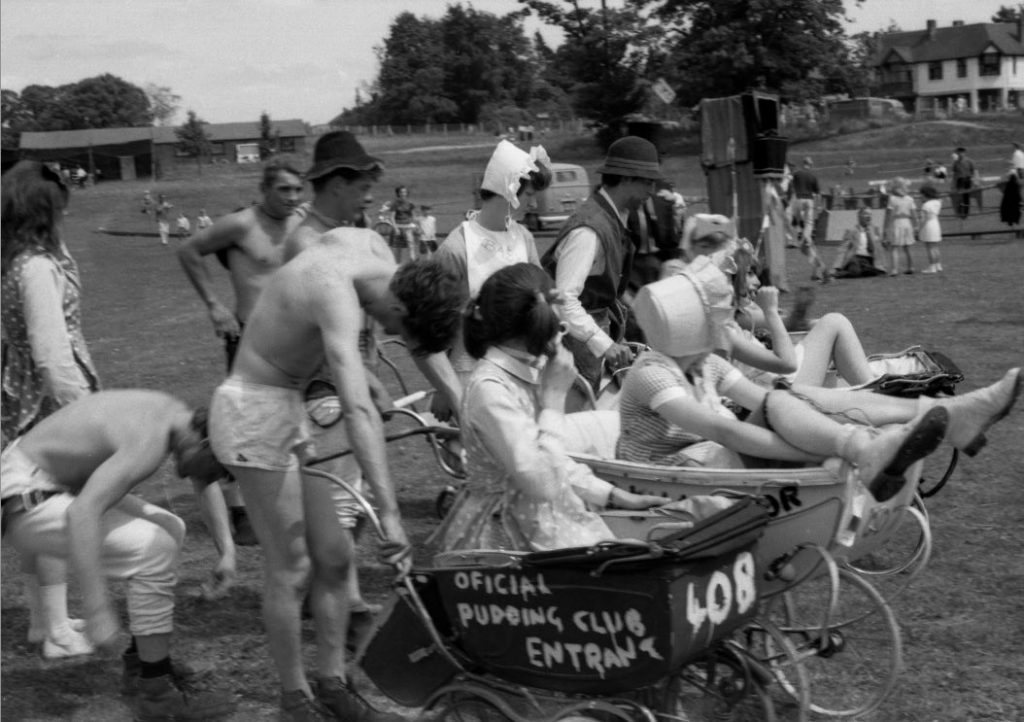 Here is another interesting view, namely of the almost-finished King George V Hall. This building, the construction of which had begun in earnest in 1964, was brought into use in the summer of 1966. It was officially opened in October by Dr Barnes Wallis (who was not knighted until two years later). 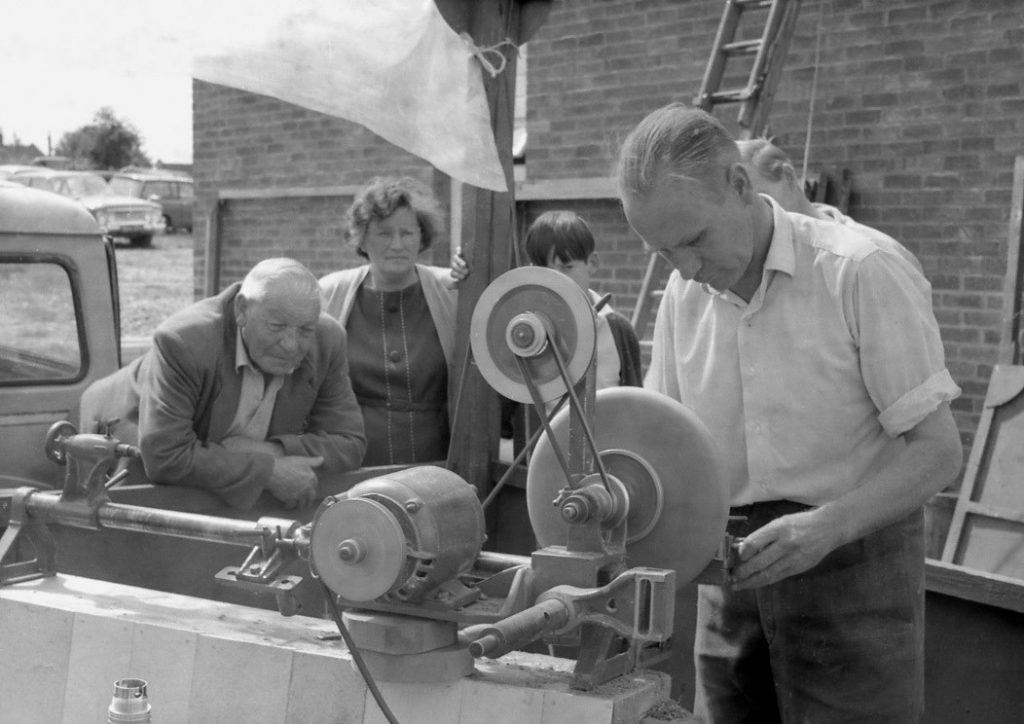 We have no material for this event other than this photograph from the Barnes Wallis Album, so have taken the liberty of including it here. It is captioned:

“The Youth Club mounted this publicity stunt for the 1967 Effingham Fair. Planning and poster production, and décor of the cars (and their occupants!), was all done by the club.”

Their little motorcade advertising the event is making its way up Little Bookham Street, passing the Olde Windsor Castle pub. 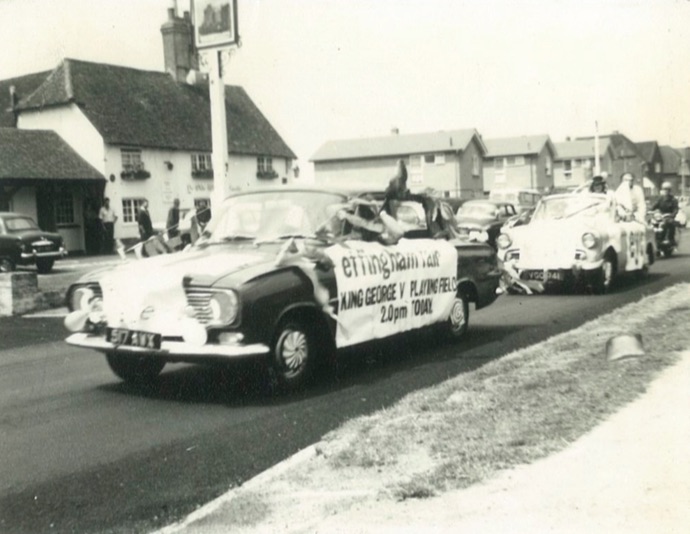