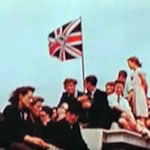 The surrender of German forces in Berlin to the Soviet Red Army on May 2nd 1945 brought the war in Europe almost to its end. Five days later the German Instrument of Surrender was signed by the supreme commanders of Germany’s Armed Forces, the Allied Expeditionary Force and the Soviet High Command, requiring complete cessation of hostilities by the end of that day. By then nearly a million German soldiers had been taken prisoner on the Eastern Front and half as many again on the Western Front. A fortnight earlier the concentration camps had been opened and their horrors made known across the world. Mussolini had been shot on April 28th and Hitler had shot himself on the 30th.

Germany’s invasion of Poland in 1939 and the subsequent aggressions of Japan had together brought about a global military conflict costing at least seventy million lives and had achieved only ruination, slaughter and misery for at least sixty nations. Despite all this, as well as the continuing war with Japan, people in Britain somehow found the strength on the morning of Tuesday May 8th and in the following weeks to come out into the streets and celebrate the coming of peace, in Europe at least.

The enormous national “Victory in Europe” celebrations, especially in London, have been so extensively documented and broadcast that they need no further commentary here; these familiar pictures convey the spectacle well enough: 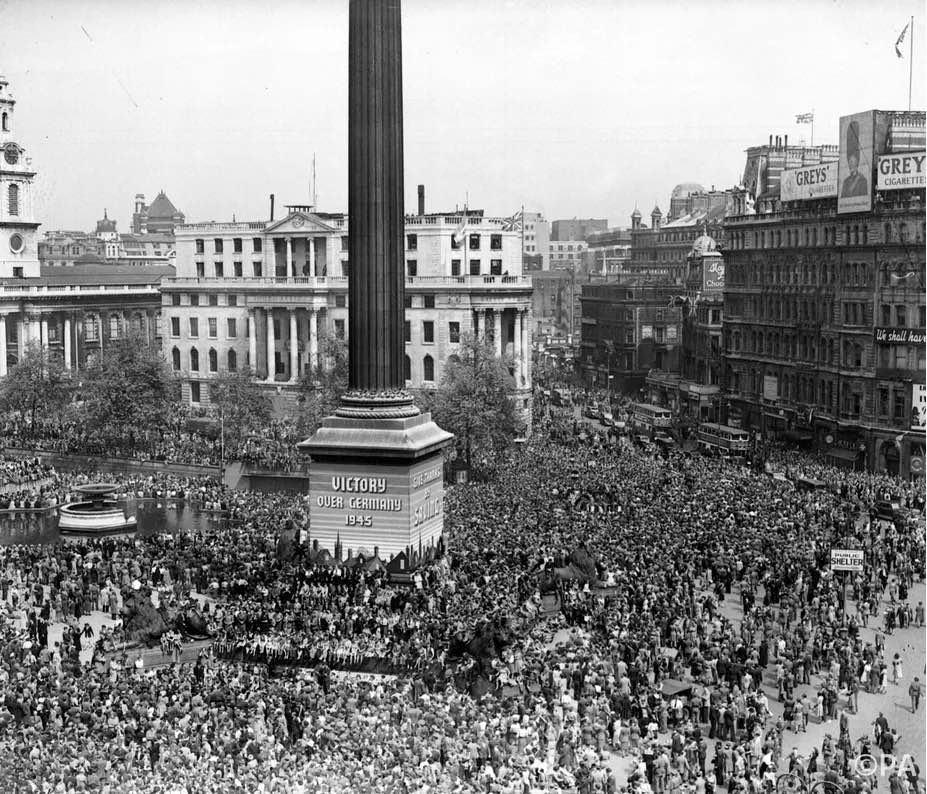 The crowds celebrating in London’s Trafalgar Square, May 8th 1945. 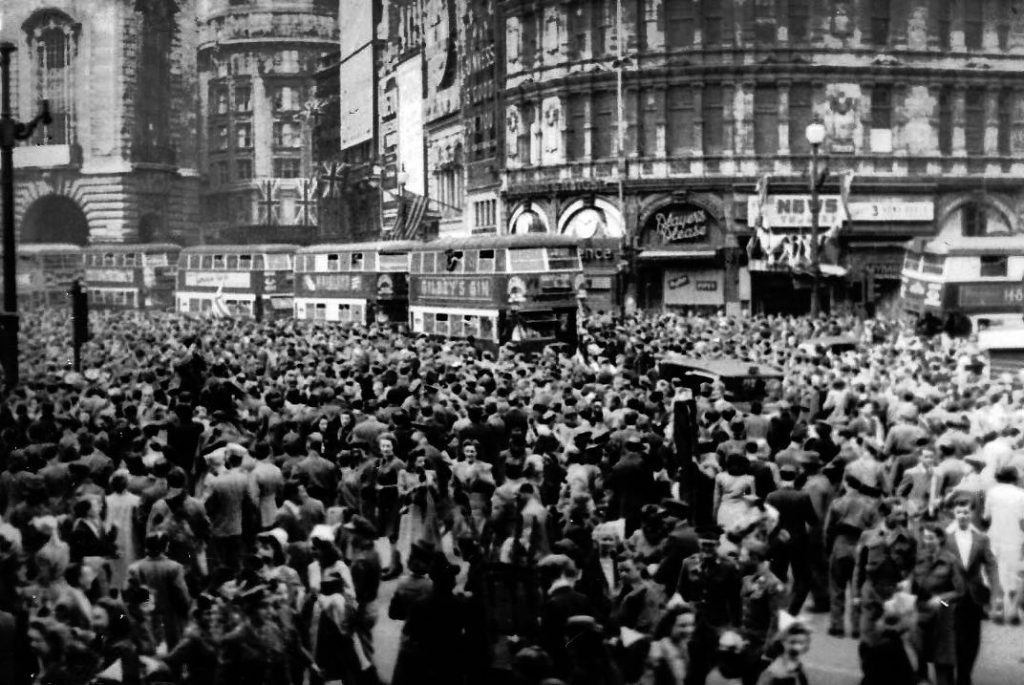 The scene in Piccadilly, London.
‘Mrjspence’ at English Wikipedia : licenced under Creative Commons 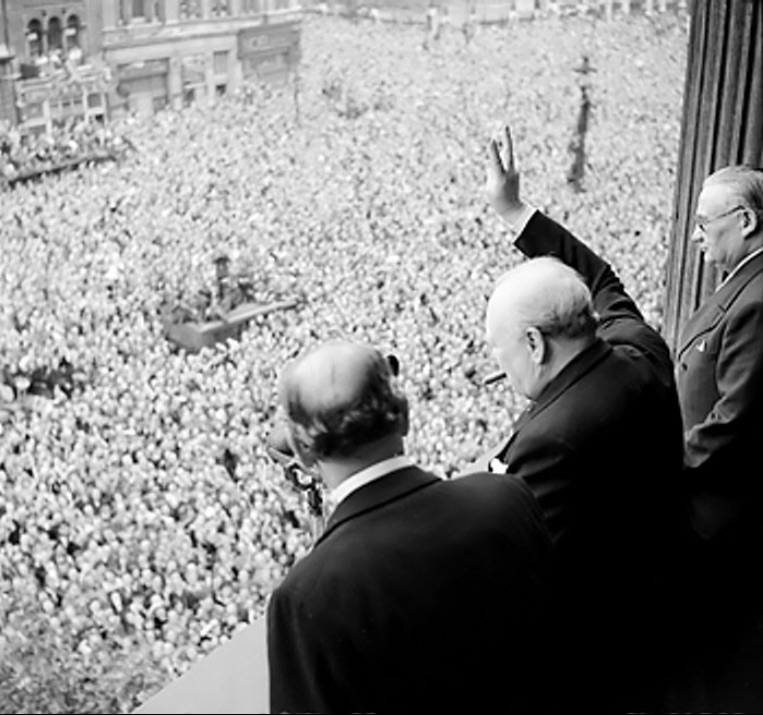 These short Youtube videos confirm the mood of excitement:

In the log book for St Lawrence Primary School in Effingham the head teacher, Mr Joseph Stewart Adams, noted on April 30th 1945 that the “Dim-out” had ceased, having been endured since September 3rd 1939.

He went on to record that on May 8th and 9th “School closes to celebrate Victory in Europe”.

Meanwhile, at nearby Manor House School in Little Bookham the staff and students assembled, complete with two large Union Jacks, for this wonderful VE Day photograph: 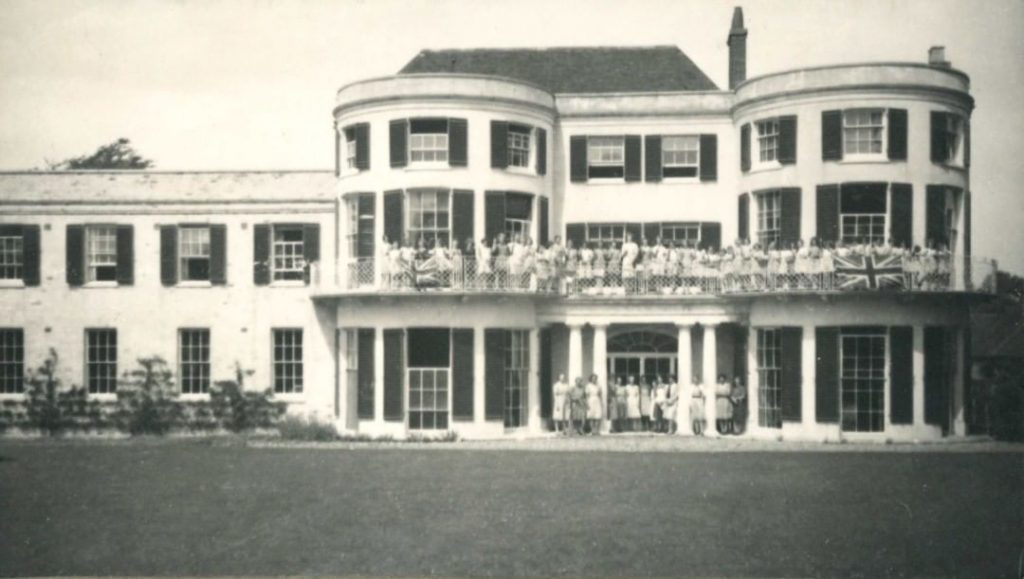 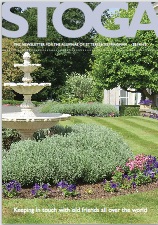 An interesting account of the war years from the perspective of a student at St Teresa’s School on Effingham Hill was written by an ex-student Dr Virginia van der Lander for the 2015 edition of the STOGA Newsletter, the magazine of the school’s Old Girls Association.

Her article can be read here, by kind permission of St Teresa’s School:

The writer gives the following intriguing account of the school’s victory celebration, in which her phrase “the Convent” refers to the (convent) school:

“Peace in 1945 was celebrated when almost the entire school danced around a bonfire at the far end of Effingham Common, nuns and pupils linking arms and singing while marching back to the Convent in the dark, the church bells becoming fainter and fainter.”

Taken at face value, this suggests that “almost the entire school” travelled all the way from Effingham Hill down to the village, went right through the village and then proceeded a further mile at least to reach the northern extremity (“the far end”) of the Common, almost at East Horsley. This would have been a very long journey, and an arduous one too if made entirely on foot.

Her phrase “Effingham Common” might conceivably have referred to the region once known as the Upper Common, virtually on Ranmore but not too far from the school. But then, on returning afterwards from there, would the sound of the church bells have become progressively fainter?

What is known is that a large bonfire was staged on the King George V Playing Fields in the heart of the village. Perhaps her celebration had been there and the memory of it later confused with the Common. Whatever the detail, it is clear that the staff and students enjoyed the evening. 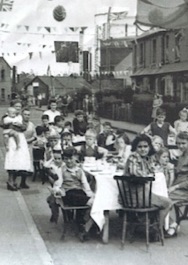 An article Memories of VE Day 70 Years Ago by Guildford historian David Rose describing the celebrations in other parts of Surrey was published by The Guildford Dragon on May 8th 2015 and includes some very nice photographs of street parties.

His article can be read here:

Here are some brief personal recollections of the celebrations by Effingham people. The first is by Richard Curtis Selley who was born in Effingham in 1939 and lived here throughout the war:

“I recall VE and VJ days clearly, being allowed to stay up late to see the huge bonfires on the King George V Playing Fields.”

The next is by Bruno Bragoli who had been a child whose London school – the Strand School in Elm Park, near Brixton – had been evacuated to Effingham where it then operated in the house named Browns. This account appeared in the The Telegraph on May 31st 2005:

“VE Day; I remember that special day very well. I had been an evacuee from Brixton during the war, but now, aged 12, I was back from Effingham in Surrey with Strand Grammar School in London.

We had a street party, which I think had been just arranged on an ad hoc basis by various residents. It seems, as I think about it now, that it was mostly for the kids.

But as the evening came there were several bonfires lit in the middle of the street. Soon the fires were melting the tar on the road and adding to the smell of the night air.

What I do remember was the sadness about a soldier, who lived across the street, who had died in the days immediately before, poisoned from drinking wood alcohol in Germany.

In the evening, after the street party, I went with my parents up to the West End of London. The 59 bus took us up to Trafalgar Square and we followed the crowds down The Mall. On the left there was a men’s club that had naked flames burning from torches on its front portico.

As we arrived in front of Buckingham Palace the crowds became dense. Everyone wanted to see the Royal family come out on the balcony. The crowd was singing “Come Out Wherever You Are”.

Eventually the balcony was lit up and the King and Queen came out with Winston Churchill to the thunderous cheers of the thousands now packed into the area in front of the palace gates.”

The ending of the war was remembered by Susan Chown (BBC’s WW2 People’s War Archive), then aged about six and living in Bishopsmead, East Horsley, as follows:

“I have a clear recollection of the joy everywhere on V.E. Day. Children had only known “the war”, so we were curious about the future when it ended. On V.E. Day, bunting and union flags were hung out along the parade of shops. Everyone had bunting tucked away, little coloured cotton triangles on white tape. My parents had their bunting stored under the shop display window, almost in readiness for this great day. Everyone was so happy.”

For Cynthia Roberts (BBC’s WW2 People’s War Archive), then a young teenager in Little Bookham, the feeling was the same:

“When victory was declared on May 8th 1945 there was an overwhelming feeling of relief. Church bells rang out throughout the country. On VE Day I met some friends and we all went up to London to join in the celebrations; it was a joyous occasion. We saw the King and Queen and the two Princesses, together with Winston Churchill, appear on the balcony at Buckingham Palace. The War against Japan ended in August 1945 but VJ Day seemed a more subdued affair.”

However, for Jessica Harrold, an Effingham teenager living at “Fiddlers Green” in High Barn Road, VJ Day was still a day to remember:

“We did not go up to London for the VE day celebrations, but we did for VJ day, really the end of the war. It was most exciting. I went up to London with my father. Tremendous crowds; one had to be careful in large squares where people were swirling about not to get squashed. It was a very happy time, such a feeling of relief that it really was all over. However life went on being fairly grim for a long time after that.”

Whereas the memories narrated above were written down many decades later, articles from the local newspapers provide fuller contemporary accounts of the events organized for the celebrations. All the following articles, extracted from the British Newspaper Archive, appear here by kind permission of Reach Plc / Mirrorpix. 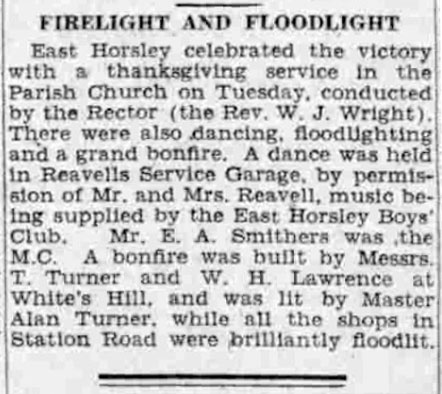 East Horsley were quick off the mark, with these celebrations taking place on VE Day itself.

The Surrey Advertiser and County Times, publ. May 12th 1945.

A little further afield, Cobham also celebrated on May 8th.

The Surrey Advertiser and County Times, publ. May 12th 1945.

Effingham and Bookham took a little longer to stage some of their activities. In Bookham, in the second half of May, eighty children were given a victory fete in the Baptist Hall.

In Effingham there were evidently several separately organised events, as seen from the articles below. On May 19th the residents of Strathcona Avenue (then very much shorter than it is today) held a VE party with tea in the Women’s Institute’s hall followed by a bonfire and dancing. On either May 23rd or 16th another victory tea and concert was staged by the Comrades’ Class. It is also related that on VE Day itself Effingham children had paraded through the village in fancy dress. Money had been raised at the afore-mentioned concert to pay for a seaside outing for them, as “some of the children have never see the sea”. On June 2nd yet another victory party took place, this one for the residents of Orestan Lane, featuring a tea, sports, games, bonfire and the giving of a present to each child. 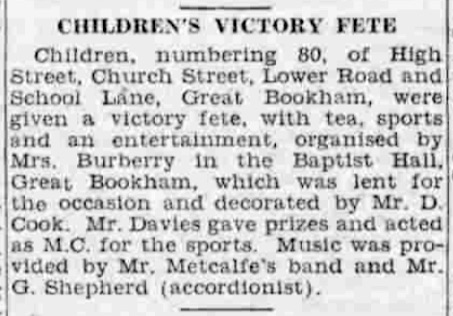 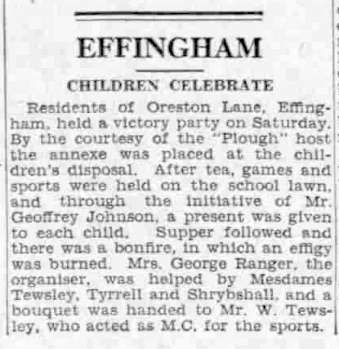 We have not yet come across any evidence of organised celebrations in Effingham of the ending of the war with Japan in mid-August. This is consistent with the remark seen above by Cynthia (née Roberts) Flittner that “VJ Day seemed a more subdued affair”. Later on, however, the Bookhams staged a major victory celebration on Saturday September 30th, as related in the article below. On the previous day 300 children had been taken to the seaside at Littlehampton. The organizers – the Peace Celebrations Committee – had arranged these festivities because:

“The older people had had their celebrations; now it was felt that they wanted to return to those things which the children had missed during the war.”

It may be that some Effingham children also took part – the article gives no clue. However, it does note that the headmaster Mr Hewitt of Effingham’s Central (later Howard of Effingham) School took a leading role in organizing the event. 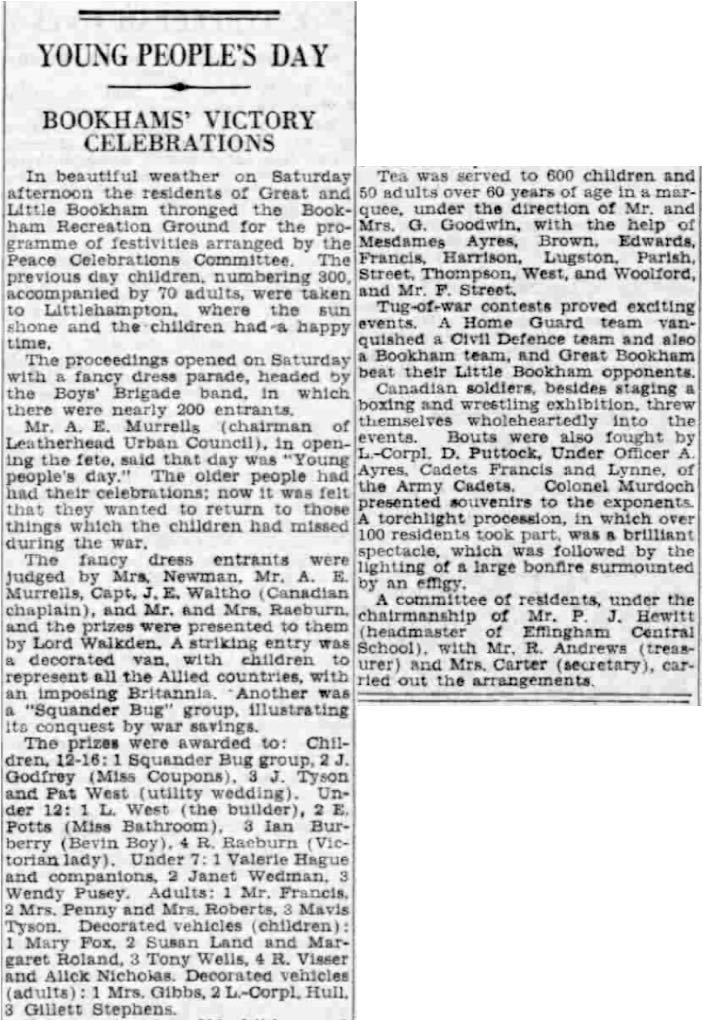