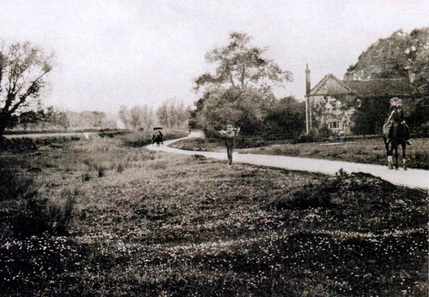 Effingham Common lies in the north of our parish and is of significant interest for both its history and its ecology. A short introduction to the Common and its special rights can be read on the Commoners’ Days page.

The Common was also the main focus of the display boards presented by the Local History Group at the Village Day of 2010, and more information about it can be read on our page for that event. Later in 2010 there was also a special Celebration of Effingham Common and our page for that shows how seriously our Commoners’ Rights are publicly acknowledged and sustained.

Effingham Common, no later than 1909, with Indian Farm to the right. 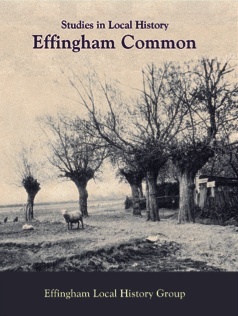 The Group’s first book, Studies in Local History: Effingham Common, was published in September 2011 and provides a much more detailed account of the subject. In particular, it documents the long and fascinating legal battle fought by the village to save the Common from development and to secure its associated rights in perpetuity, a battle which elevated one particular horse to legal fame! 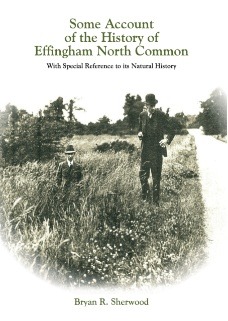 Additionally, there is an another printed work Some Account of the History of Effingham North Common written by Bryan R. Sherwood and published in 2011. Copies are not on public sale but can be obtained by making enquiry to the Group. Besides its historical material it contains a detailed and beautifully illustrated survey of the Common’s ecology.

The remaining content on this page is material about the Common that does not already appear in the above-mentioned works.

Matthew Arnold (1822-1888), Inspector of Schools and one of the great poets of the Victorian era, was familiar with Effingham, as evidenced by his occasional references to it in his writings. The following extract is from a letter he wrote in 1879 to his unmarried sister Frances when he was staying in Cobham [Letters of Matthew Arnold 1848 to 1888, Vol. II, by George W.E. Russell, Publ. Macmillan and Co, 1895, pp.159-160]: 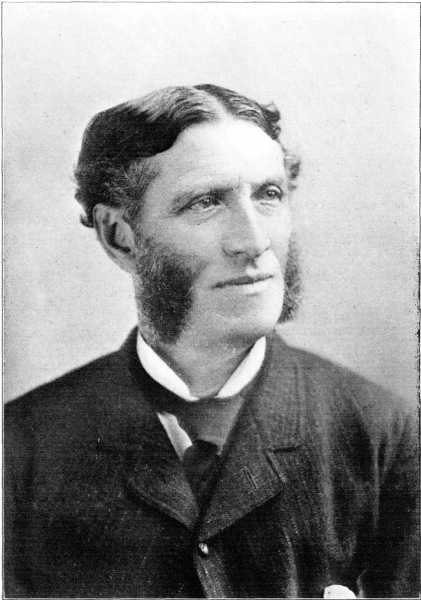 We dined at Effingham last night, and twice as we drove home the man stopped to call our attention to the chorus of nightingales. At one place, a thicket just before entering upon Effingham Common, they were almost maddeningly beautiful. It is a great loss to the North and the South-west of England not to have them; their extraordinary effectiveness is shown by even the poor people being so much interested about them and always knowing their habits and haunts. I should like to have you here for the cowslips and the nightingales; and it really must be arranged next year, if we live.

Another instance of Arnold associating Effingham with nightingales is quoted (but without stating the source) in Edward Thomas’ book A Literary Pilgrim in England [Publ. Methuen, 1917, pp.75-76]:

Again he hears them “along one of the old grass roads of this country, some thirty yards wide, leading from Bookham Common to Effingham Common, with woods on one side, and a great bowering hedge on the other”.

Adders seem not to be mentioned in present-day accounts of the Common’s wildlife, and the type of soil is not the most favourable for them.

Nevertheless, there was certainly an adder there on a particular day in 1884, and it was to take the life of the man who encountered it. We learn this from a remark made in the book Navvyman by Dick Sullivan [Publ. Coracle Books, 1983] describing the hard lives of the navvies  (including his own Surrey-born father) who built the country’s roads, railways and canals. In Chapter 5, discussing alcohol-related deaths of navvies, he writes:

“Drink, directly or not, was a common cause of death. A train cut off Putsey Bill’s arm as he lay draped, drunk, across the railroad track at Cullingworth, 1883. Next year Black Joe’s George was drowned, drunk, in a brook and Jimmy Drew was stung to death by an adder one lazy, insect-humming day as he lay, drunk, on Effingham Common.”

The GRO reference to Jimmy Drew’s death is [Guildford 2a 50, 1884 (Q3)] and gives his age as 42. His death certificate describes him as a “labourer on the line” and states that he died from heart disease on August 9th, making no mention of an adder bite. The certificate had been received (by the Registrar) from the Guildford Borough Coroner, T. J. Schollick, following an Inquest held on August 12th.

Jimmy’s origins have not yet been determined. He may have been the James Drew whom the 1881 Census finds, as a railway labourer aged “40”, lodging with several other railway labourers in London Road, Dunton Green in Otford, Kent [PRO Ref: RG11 Piece 905 Folio 89 Page 22]. His birthplace is given simply as “Lincoln” but, as the unrelated person below him was also assigned that birthplace, it is not impossible that there is an enumeration error here. However this may be, the GRO seems to have no Lincolnshire birthplace for any James Drew born around 1841, and nor can a corresponding person be found in the preceding censuses. Perhaps more research will uncover his origins.

The Common has long been of interest for its insect life. Here is a little vignette of a day in June 1950 when the Common and the Halt Tea Rooms, just north of Effingham Junction railway station, were visited by a team from the South London Entomological and Natural History Society.

PROCEEDINGS AND TRANSACTIONS :
OF
THE SOUTH LONDON
Entomological and Natural History Society

Dull weather in the morning was probably responsible for the failure of an attempt to assemble the clearwing moth, Sesia apiformis Clerck. A member brought two females and these attracted nothing although placed near the bole of a large black poplar clearly marked with exit holes. But the morning brought an interesting new record for an Effingham Field Meeting. Larvae and a pupa of the Waved Black Moth, Parascotia fidiginaria L., were found on Polyporus adustus Ft. growing on a tree stump.

[The team had evidently convened at Effingham Junction station and had then proceeded to Ockham Common, possibly on foot; the article describes what they found there, then continues as follows, after their return to Effingham.]

On the way back to the station the chiff-chaff was heard singing and nightingales were “croaking”. The cuckoo was still calling.

Nine sat down to tea in the rooms [see picture below] adjoining Effingham Junction Station.

Afterwards some of the party went to Effingham Common. Searching the sallows was unproductive but Cerura hermelina Goeze [Poplar Kitten moth] (in the egg stage) was found on the aspens. Small bushes of alder buckthorn had young larvae of Gonepteryx rhamni L. [Brimstone butterfly]. That the Common had, not many years ago, been much wetter than it is now was clear from Oenanthe crocata L. [Hemlock Water Dropwort], Pedicularis sylvatica L. [Small Lousewort] and other moisture loving plants lingering on in places now unsuitable. The slender vetch (Vicia tetrasperma (L.) Schreb.) and the yellow rattle (Rhinanthus minor agg.) were noted and it was observed that many of the birches were Betula pubescens Ehrh., the species with hairy twigs and leaves. 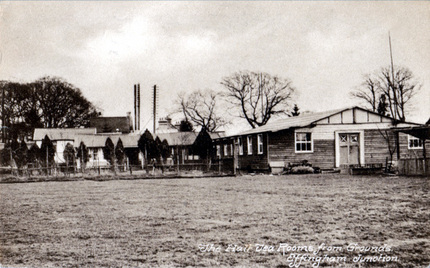 The Halt Tea Rooms (at far left) near the station, as they were in the 1930s. The view is south from towards the station at the rear.
The road is out of sight, to the left of the picture. Source : The Mary Rice-Oxley Postcard Collection.

As remembered by Diana Smith, resident of Heath View.

“Animals – rabbits, foxes and deer. Birds – owls, lapwings, sparrow hawks, rooks, crows and the usual garden birds. Up until the 1970s, nightingales at the top end of Hooke Common / Ridings Wood. Flocks of seagulls following ploughing and flocks of Canada geese after harvest on Hooke Common.

Crops on Hooke Common included sown corn, barley and – in one year only – beautiful blue flax. Stubble was burned after harvest, but there was a bad fire one year when the hedge between Hooke and Effingham East Court Commons caught fire.

The Common was used to fly kites and model aircraft, also (up to 1979) for cross-country running in the winter terms by pupils of Parkside Preparatory School, then located in Forest Road, East Horsley. The route of these runs was from the school across Forest Road, down Norrel’s Drive into Ridings Wood, exiting at the top of Heath View, then round the far side of Hooke Common Field; then across the bottom of the field to exit into Heath Way; then up the Forest Road pavement and so back to the school.”

Photographs and narratives by Diana Smith, resident of Heath View.

October 2002 saw what was probably the last harvest (pictured below) on Hooke Common, after which the land became subject to set-aside under European regulations. 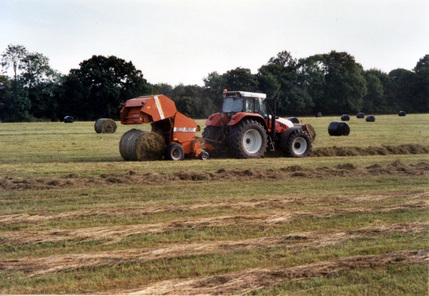 In August 2003 this engine-powered microlyte was seen taking off from Hooke Common Field: 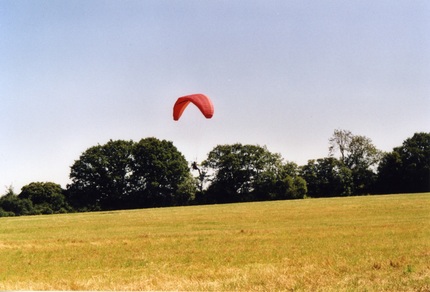 On October 24th 2003 the final flights of the three British Airways Concordes took place, and were staged such that people viewing them from specific locations could be kept advised of progress by live TV and radio coverage. They were scheduled to arrive together at London Heathrow at 16.00 for a spectacular three-aircraft back-to-back landing, with all three in the sky over London at the same time prior to landing. The first Concorde to land, coded Alpha-Echo, flew from Edinburgh; the next, Alpha-Foxtrot, flew from Heathrow for a VIP trip around the Bay of Biscay, whilst the last was BA002 from JFK airport in New York, performing the final transatlantic Concorde flight.

Below are images of the BA002 Concorde, as seen from Effingham Common, circling on the Ockham beacon while the landing formation of all three was being synchronised. 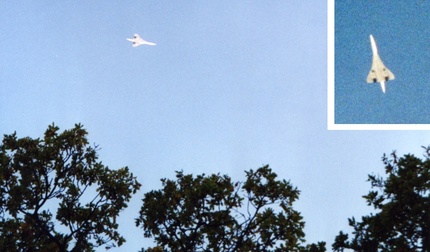