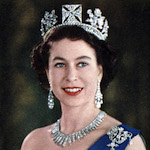 Princess Elizabeth, born on April 21st 1926, had not expected in her youth to become Queen. When she was aged ten her grandfather King George V was still on the throne and it was natural for her, as for everyone else, to assume that he would eventually be succeeded by his first-born son Prince Edward, the Duke of Windsor, and subsequently by Edward’s descendants. Even if none of that came to pass, it still remained just possible that her parents would produce a son, displacing her yet further down the line of succession, although her mother was entering her late thirties.

When George V died in January 1936 Edward duly became King. The Coronation of King Edward VIII was planned to take place in the following year on May 12th. However, Edward abdicated in December 1936 in order to marry his mistress Wallis Simpson, with the consequence that his younger brother Albert now became King. The planned Coronation day was then re-oriented to crowning Albert instead of Edward.

Princess Elizabeth now became the next in line and the prospect of her one day becoming Queen had suddenly become almost inevitable.

Her father Albert was duly crowned, as King George VI,  in 1937 and from this time onwards her time was taken up much more in learning constitutional history and in preparing for becoming Queen. She acquitted herself well during the war years in the eyes of the populace. After the war her father’s state of health, already poor, now declined more significantly and she began undertaking increasingly more duties on his behalf. She accompanied him to South Africa in early 1947 and performed several official roles there. Later that year she married Prince Philip of Greece.

In early 1952 she and Philip went out to Kenya. While there her father died, on February 6th, and she straightaway returned to England in her new role as Queen Elizabeth II.

Elizabeth’s Coronation at Westminster Abbey took place on Tuesday June 2nd 1953. During the previous weeks she had undergone two full rehearsals at the Abbey with her maids of honour and had worn the Imperial State Crown for extensive periods in order to improve her confidence in wearing it at the eventual ceremony.

In time-honoured fashion the Royal Family processed to the Abbey in a series of carriages past huge and enthusiastic crowds, standing behind lines of thousands of servicemen from many national and Commonwealth units. The Queen travelled in the slow and reputedly uncomfortable Gold State Coach. The route from Buckingham Palace was via the Mall to Trafalgar Square, down Northumberland Avenue and then into the Embankment and down to Westminster. It has been estimated that about three million people on the streets watched the procession pass by. 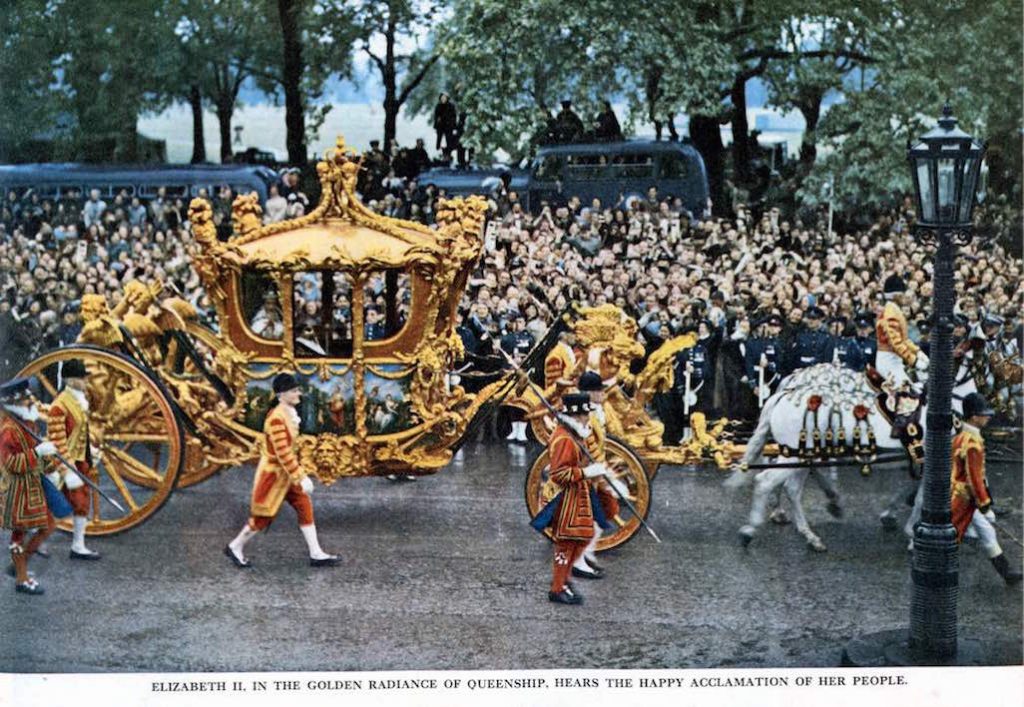 In the Abbey the ceremony was watched by about eight thousand guests and followed much the same format as for previous Coronations. The Queen took her position on the ancient Coronation Chair of King Edward I and made her lengthy formal oath before the Archbishop of Canterbury, Geoffrey Fisher. This was followed by the Communion Service, the Anointing and the rituals of the State regalia, culminating in the Archbishop placing upon her head the much heavier and older St Edward’s Crown. Following a few further formalities a 21-gun salute was heard issuing from the Tower of London. Then, after receiving oaths of allegiance from the Royal Peers, starting with Prince Philip, the Queen, now wearing the Imperial State Crown, proceeded with her attendants to the Great West Door and out of the Abbey to the acclaim of the thousands waiting outside. 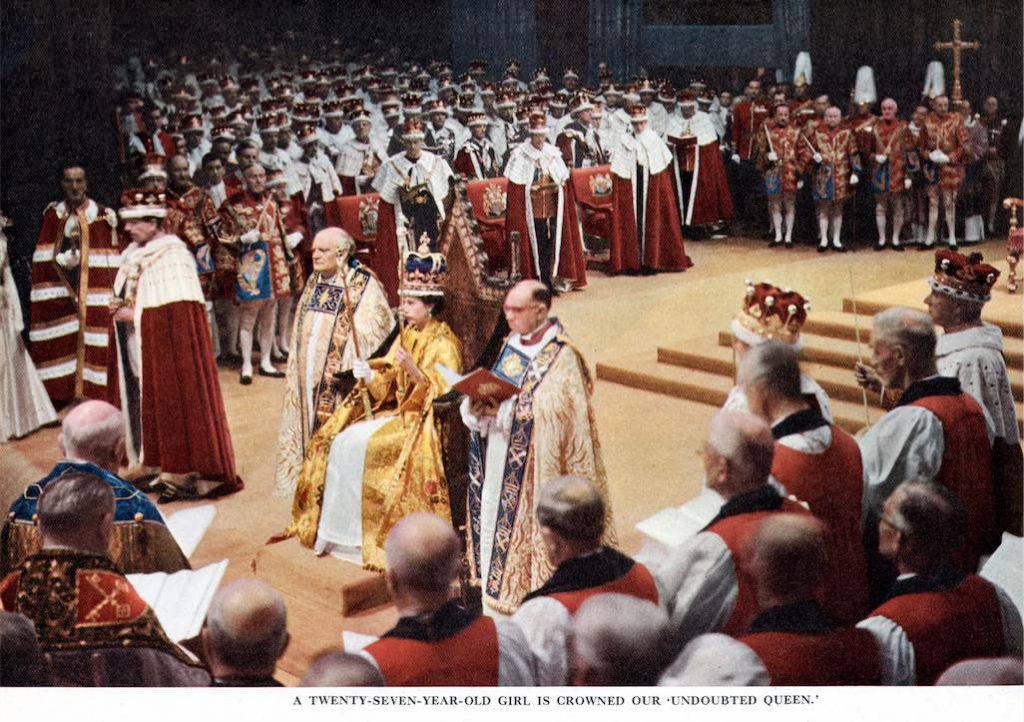 The return Procession was a spectacular affair and followed a five-mile route, firstly going north from the Abbey into Trafalgar Square. For there it made a circular journey, reaching Hyde Park Corner via Pall Mall, then proceeding north to Marble Arch and from there down Oxford Street, Regent Street, Haymarket and back to Trafalgar Square, finally going down the Mall to Buckingham Palace. The participants, including regimental bands, marching troops and Royal personages in carriages headed by the Queen in the Gold State Coach, extended over two miles and numbered at least thirty thousand. One unfortunate feature of the day was that the weather was quite poor. A chilly, damp morning was followed by more persistent rain throughout the afternoon and made conditions quite challenging for the procession.

The photographs below show the Queen and Prince Philip in various modes of attire on the day of the Coronation after returning to the palace. 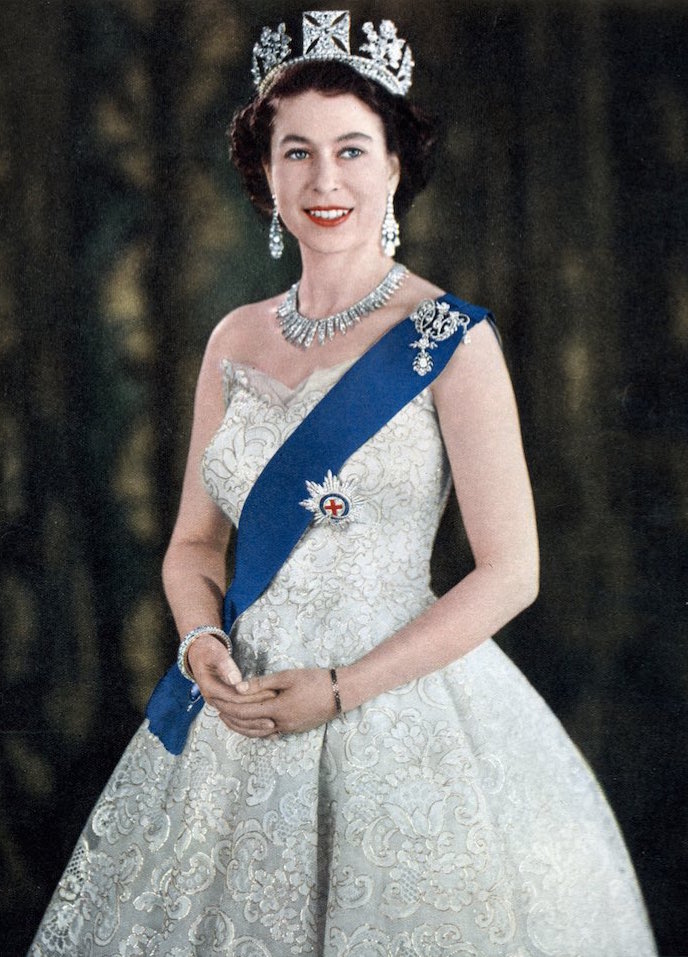 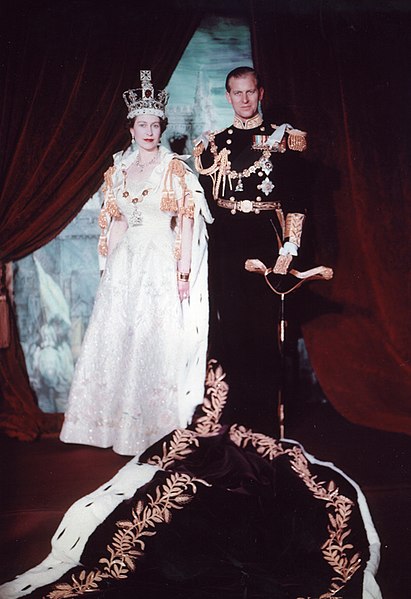 Above: the Queen and Prince Philip in their Coronation attire.

Below: on the balcony after returning from the palace. 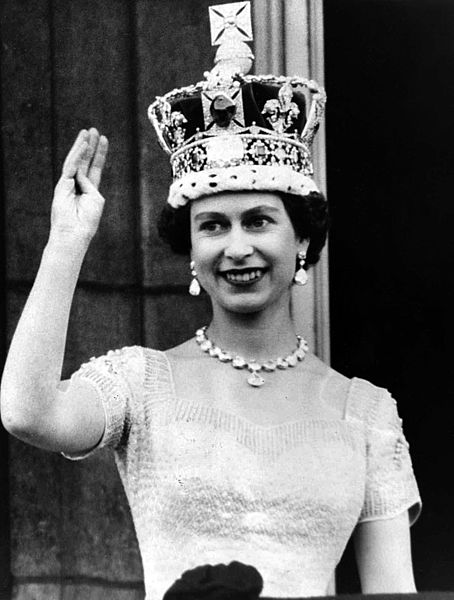 The short videos below give an impression of the Abbey ceremony and of the subsequent procession. Barnes Wallis was somewhere among the spectators, having been given two free seats by the Air Ministry. 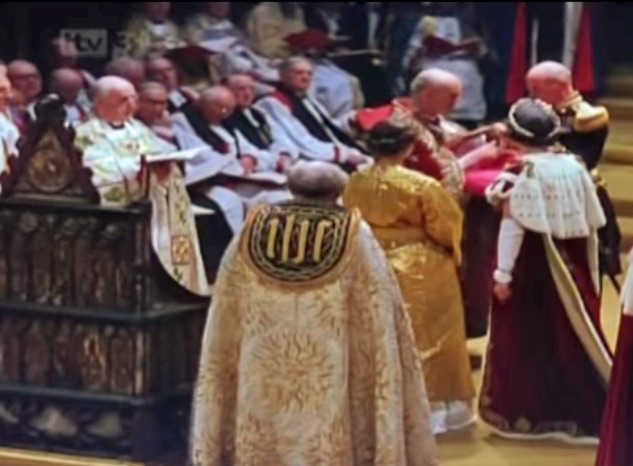 Left: the ceremony in progress in the Abbey.
(click to enlarge) 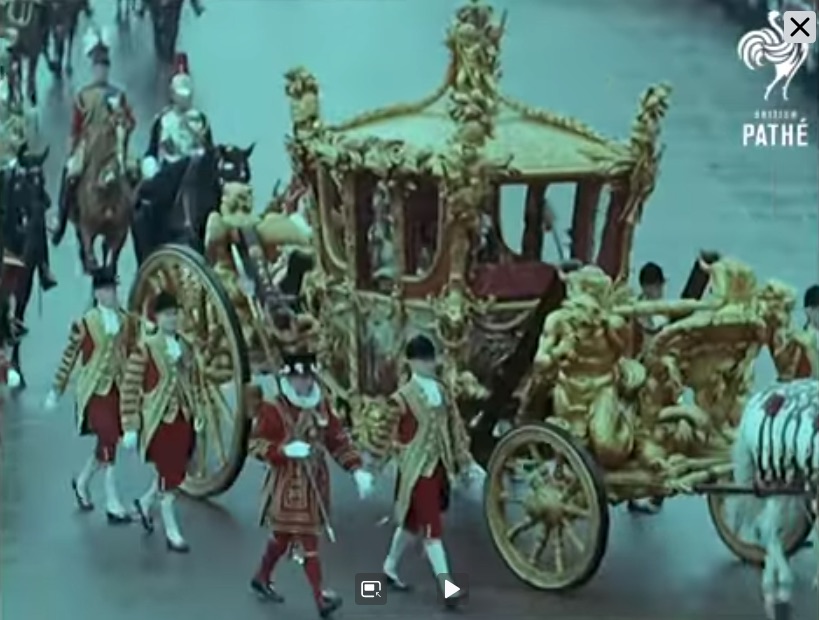 Left: returning from the Abbey in the Gold State Coach.
(click to enlarge)

In the village thought was being given to the celebrations as early as November 1952. On the 25th of that month the matter was deliberated upon at one of the meetings of the King George V Committee of Management under the Chairmanship of Barnes Wallis:

“The Chairman asked the Committee whether they would be prepared to act as a body in connection with the organisation of Coronation Celebrations in this Village. After discussion it was decided that while individual members would be very pleased to offer their services, the Committee as a whole would not take official action in this matter. The Chairman said he would report this attitude which was a reasonable one to the Parish Council, who would make arrangements accordingly.”

What the Parish Council did we do not yet know.

The staff of the local primary school met in April to discuss the Coronation, as noted in the school log book, but what they concluded or decided is not recorded:

The local primary school – which had been renamed as St Lawrence County Primary Junior Mixed and Infants School since late February 1953 – was under the headship of Mr Frank Watkins.

It is clear, however, that plans were underway for the children’s role in the celebration to come, as the log book notes their rehearsals for this in May:

Celebration rehearsals on May 18th and 20th.

The school then closed for an extended “Whitsun and Coronation Holiday”, re-opening on the Wednesday. The log book reveals that the school’s celebration was an internal one held two days after that, on Friday June 5th:

The school’s celebration on June 5th was “a special programme of races, tableaux, recitations, songs and dances” presented in front of a large number of parents. 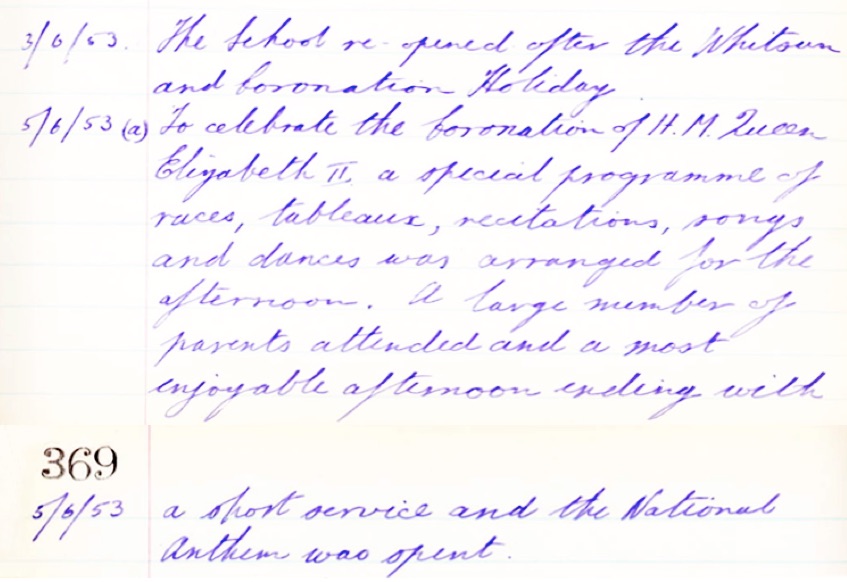 The two newspaper articles below from The Surrey Advertiser and County Times show that other celebratory activities took place as well. The one on the left was published on June 6th and reported that, among other things, the village children enjoyed a tea party and film show at the Howard of Effingham School.
The article on the right, published a week later on the 13th, reported on a play and Coronation tea staged by Effingham Women’s Institute for about 80 elderly residents.

One might have expected a more extensive celebration of the event, as had been the case with the 1937 Coronation. However, the nation was only slowly recovering in this post-war period, both socially and economically, and so the collective will for organising large local events may have been subdued. This was also the first Coronation in Britain to be televised and people may have been content simply to gather around TV sets rather than take part in organised antics outdoors. 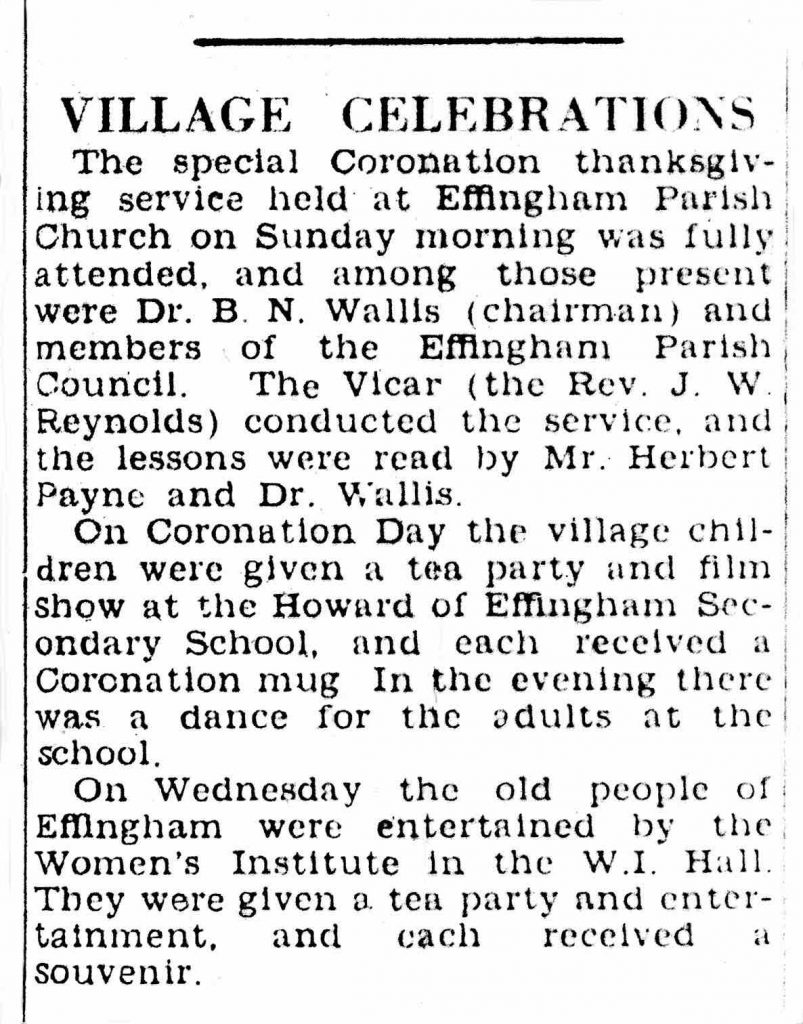 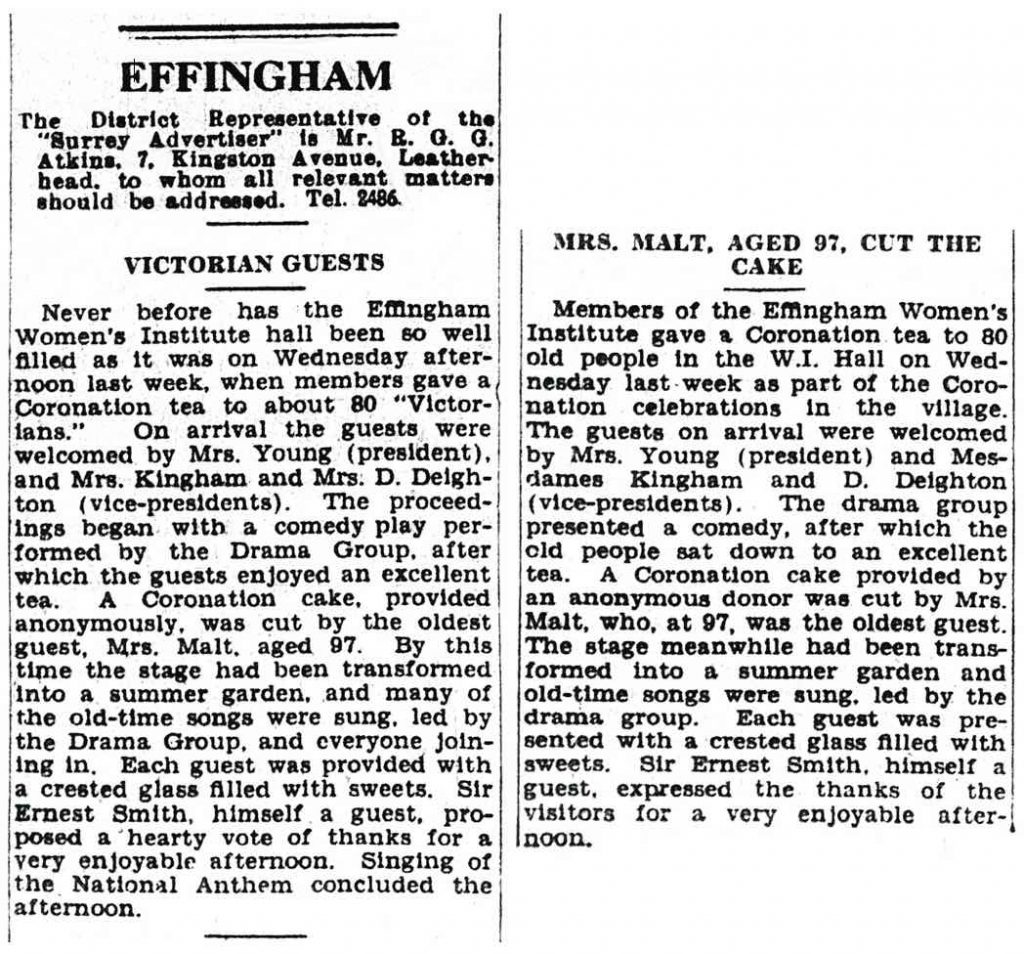 We have no direct photographic evidence of Effingham’s celebrations of the Coronation, only the two pictures below having some local connection with the event. The first is taken from the pages contributed by St Lawrence School to the Barnes Wallis 80th Birthday Album; it is captioned “May Queen Coronation Year” and shows children clearly adorned with Coronation emblems. The second is a picture taken on the day of the Coronation showing Bookham High Street festooned with bunting and Union Jacks. 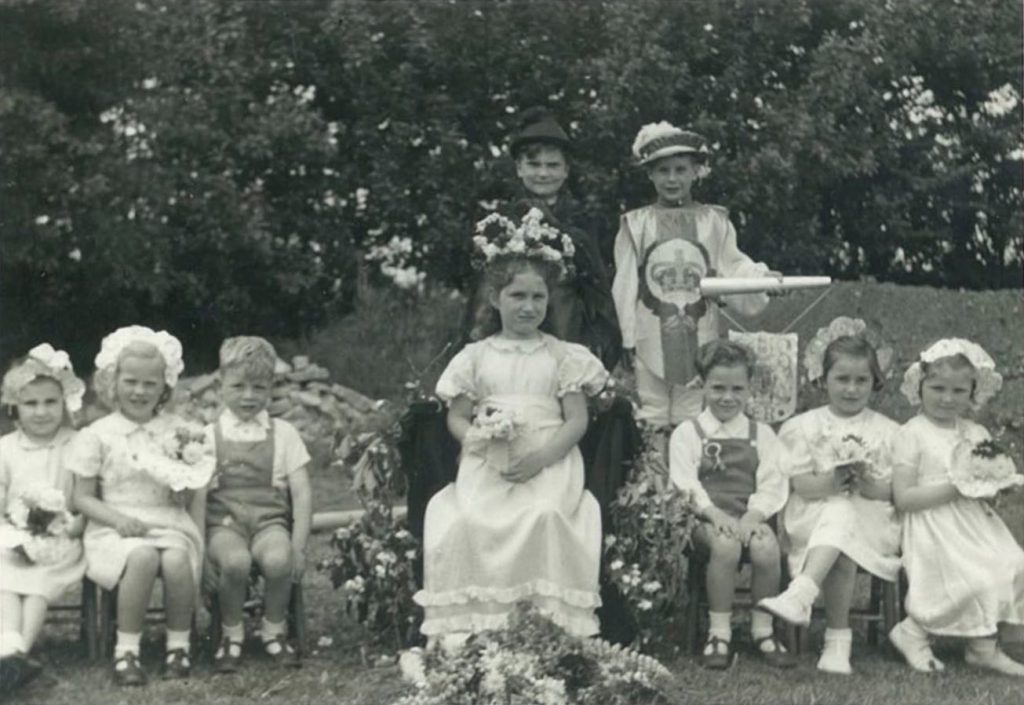 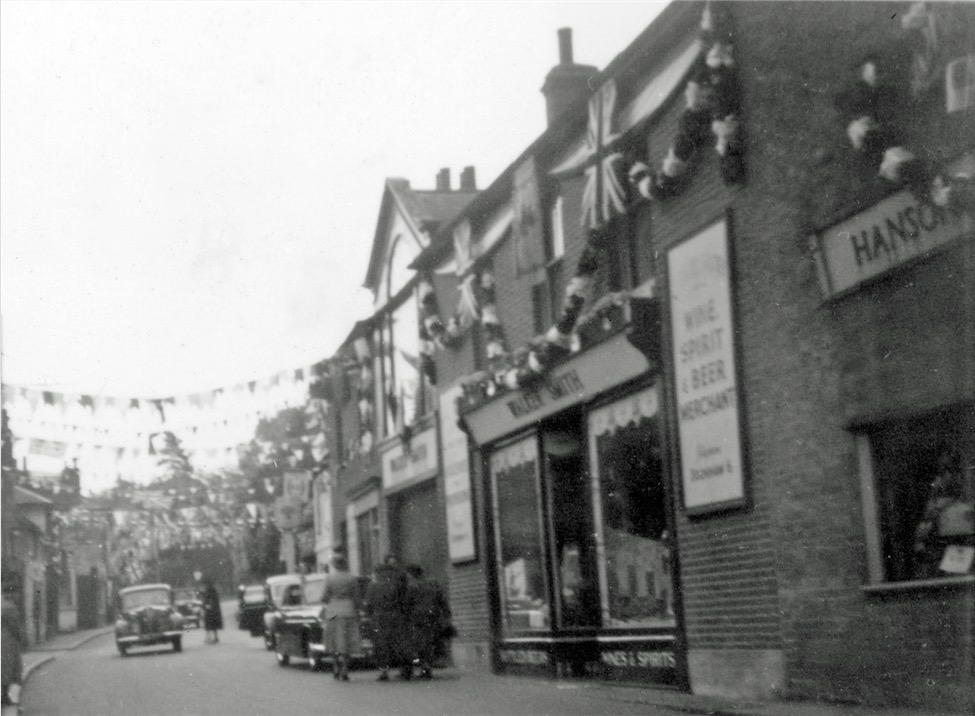