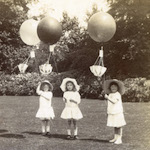 Planning began in Effingham at the Annual Parish Meeting held on March 29th 1911, when it was decided to call a public meeting on April 5th to elect a committee to “consider the best way to celebrate” the Coronation.

Following this, on the same evening, the Parish Council held one of its Ordinary Meetings and endorsed these arrangements. Here are the relevant extracts from the Minutes of the two meetings held on March 29th: 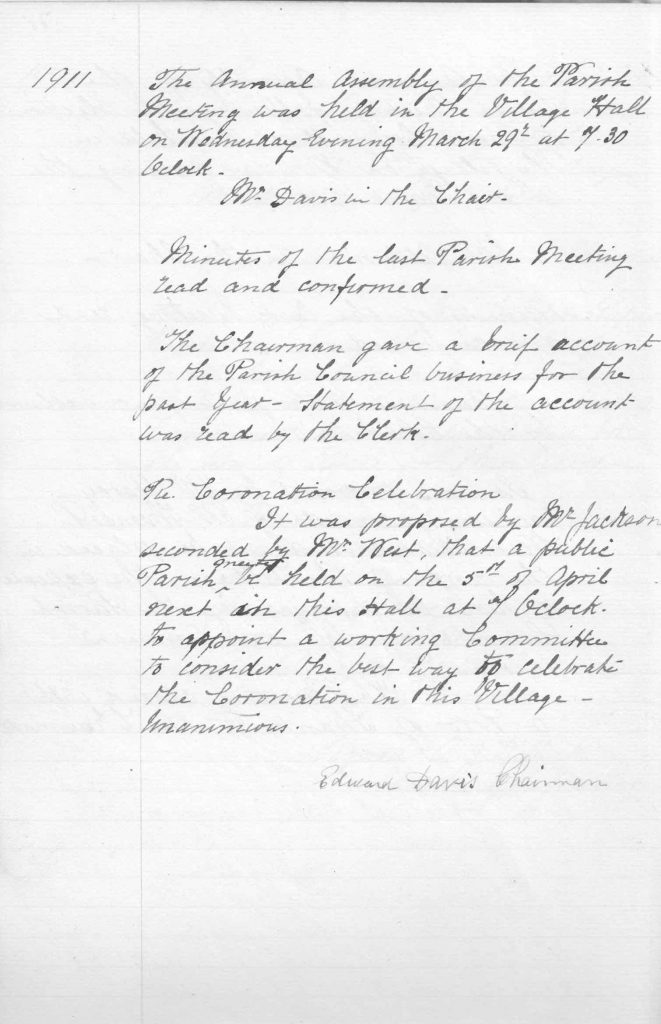 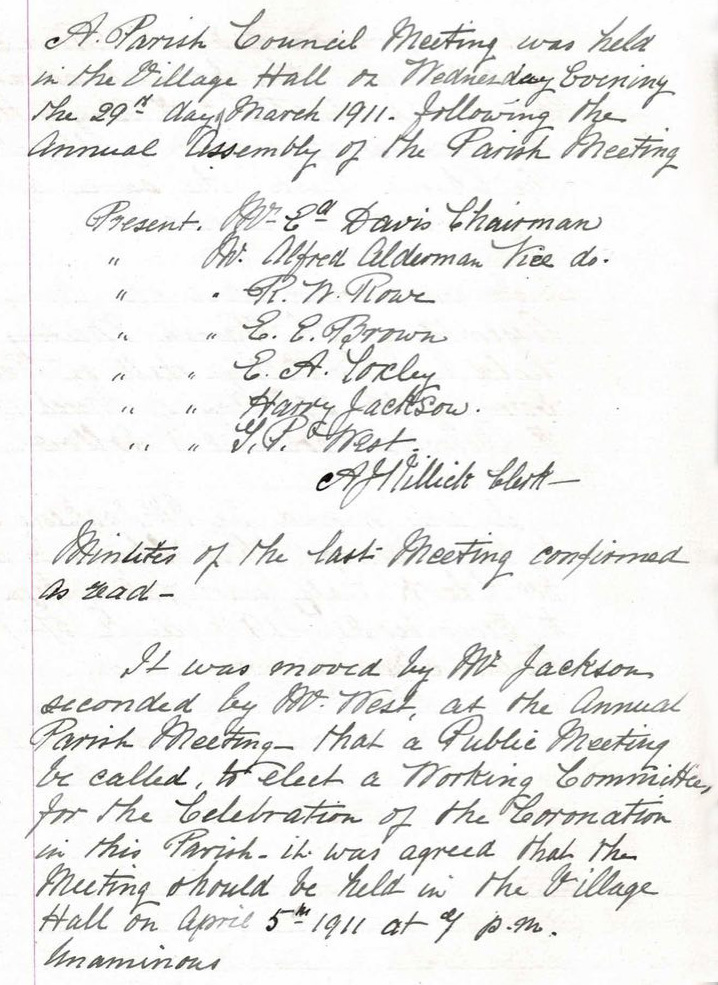 By mid-June the local (“National”) school was making preparations too, with the children singing “patriotic songs” and hoisting the Union Jack.

This log book entry was made by the head teacher Mr Joseph Stewart Adams who had begun his appointment at the beginning of 1910, succeeding the former head Mr William Blaxland.

On the morning of June 22nd three separate processions, altogether containing about two dozen carriages accompanied by large mounted escorts, made their way from Buckingham Palace to Westminster Abbey. The first of these transported representatives of foreign royal families and governments; the second took certain members of our own royal family, including the King’s children; the third carried officers of state together with the King and Queen in the Gold State Coach. 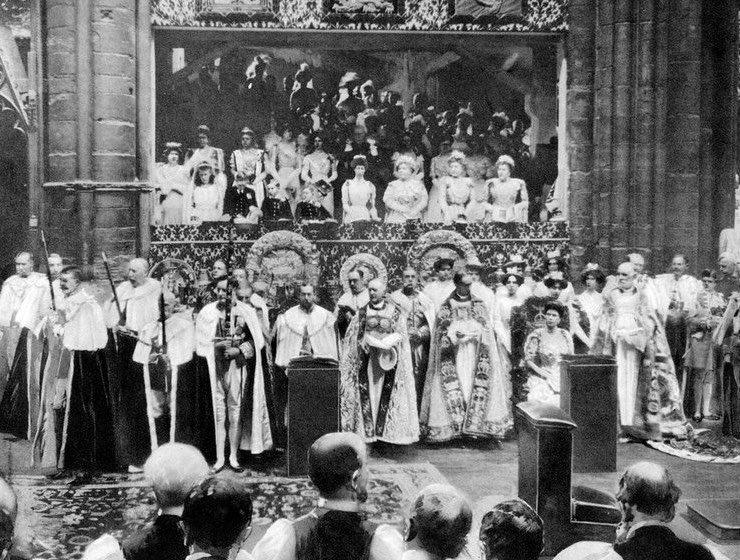 Inside Westminster Abbey: George is seen slightly left of centre, whilst his wife Mary is seated further to the right. 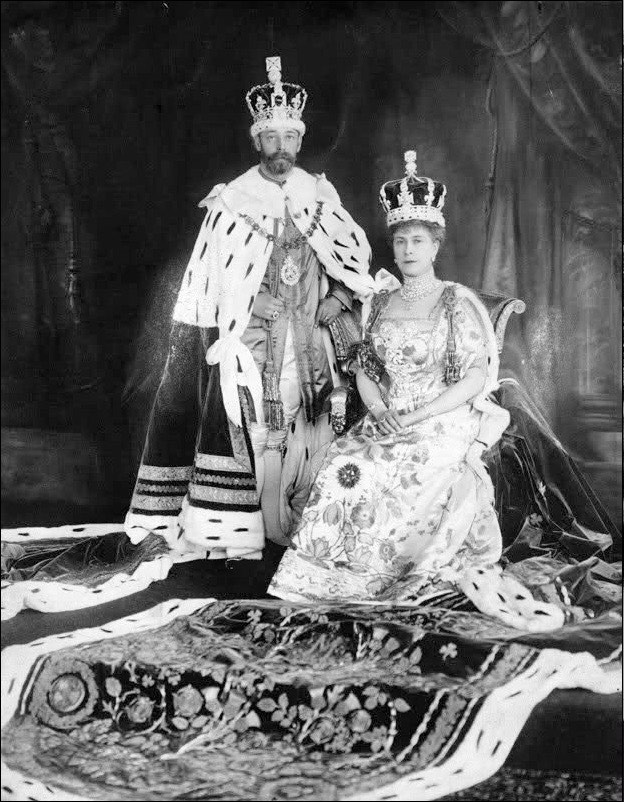 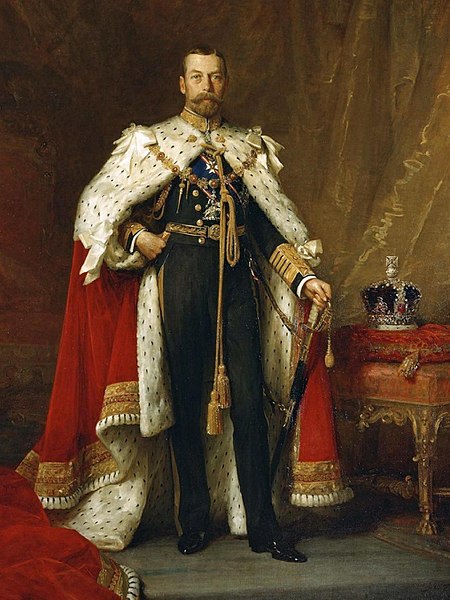 George and Mary in their Coronation robes.

After the Service the three processions made their way back to the palace but by a different and longer route attended by about 45, 000 servicemen. Upon their return the King and Queen did something unprecedented by appearing on the palace balcony before the crowds, causing immense excitement.

On the following day, June 23rd, very similar processions were staged again, this time as a Royal Progress through the City, with even more servicemen attending. The King and Queen went in an open landau instead of the State Coach.

Then, on the 24th, the King and Queen reviewed the Fleet at Spithead, near Portsmouth, watched by more than two hundred thousand people.

The school had evidently been closed for the entire week:

Here is what the Press had to say about Effingham’s activities:

From the British Newspaper Archive : reproduced by kind permission of Reach Plc / Mirrorpix

The financing of the celebration was set out on the balance sheet below which was inserted into the Annual Parish Meetings Minute Book. It reveals a few more details of the activities themselves, including expenditure on bunting and hire of tent and crockery; hire of the Bookham Band; the services of a policeman and a watchman; and the hire of Benson Swings for a cost (£9) that was three times greater than the amount raised from that entertainment. The cost of the entire celebration was about £71 and the income raised from it was sufficient to leave a small surplus of nearly £3 which was donated to the Boys Scouts Fund. 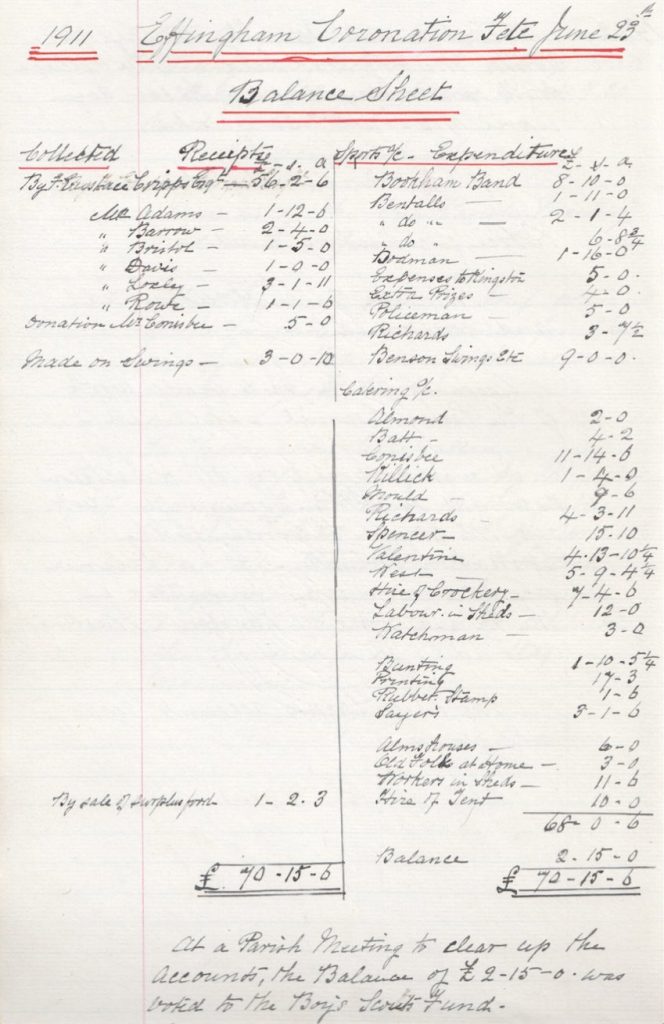 Besides this public event there is evidence to indicate that a significant celebration was also staged by the family of George Craig Saunders Pauling and his wife Dolores (“Lola”) at their Effingham home The Lodge.

One of the family’s photograph albums contains the group of images below. The first of these shows their eldest daughter Dolores Angela riding a small horse decorated with floral garlands, being led out by her mother in sight of a large crowd of well-dressed guests. The following two images show Dolores Angela and others holding balloons which were almost certainly coloured red, white and blue. Since ELHG possesses numerous well-dated photographs of Dolores Angela we can be sure that these three images show her when aged about 3 and a half, the same age as she would have been at the time of the Coronation.

Dolores Angela Pauling with her mother Lola at The Lodge. 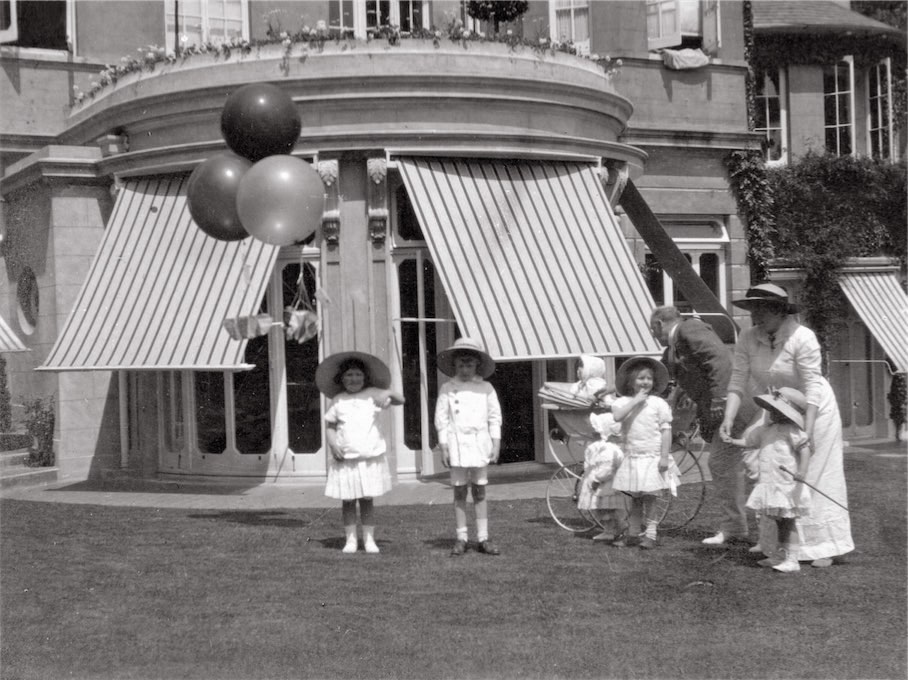 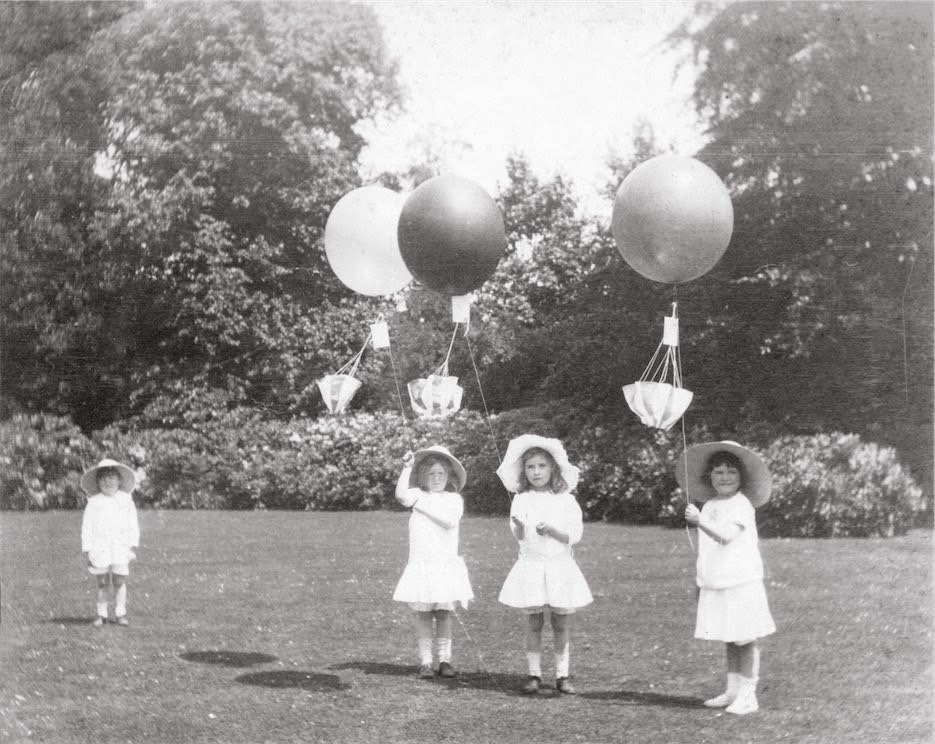 We have no other photographic testimony to the way in which the Coronation was celebrated locally, but the postcard image below shows the procession that marched through the streets of Guildford. 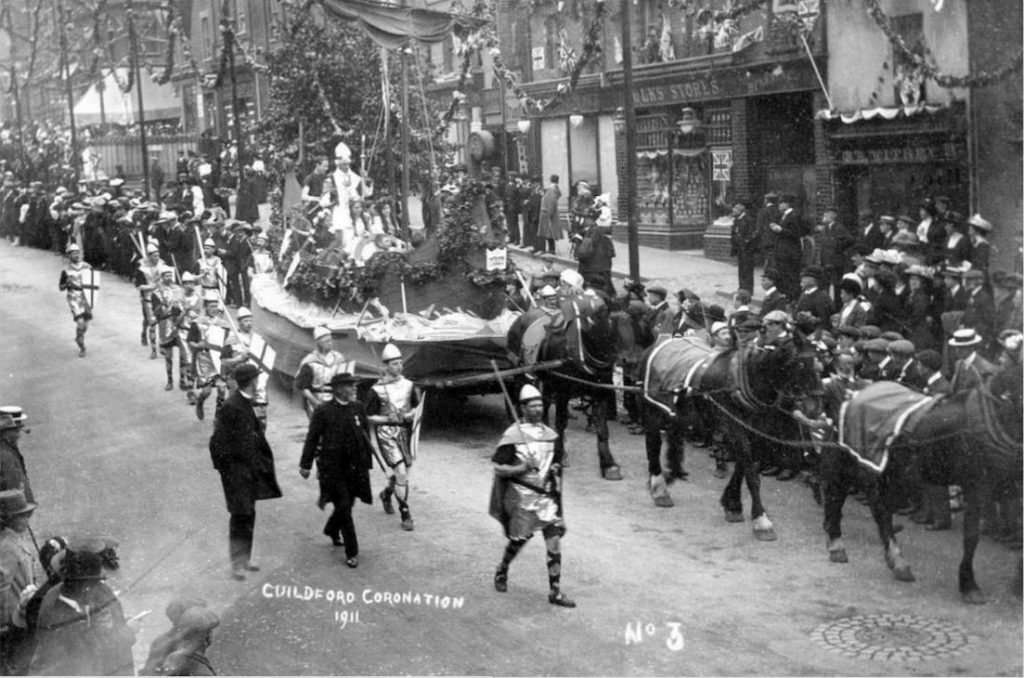