Note: although the plaque gives his rank as Sergeant Major, such contemporary military records as survive for him all give his rank as simply Sergeant.

At present this is entirely unknown.

His forenames were registered at birth as “William Charles” although he generally preferred the reverse order. In this account he is referred to as “William”.

His mother was Alice (née) Curtis, born in the 1860s in Ellisfield, a few miles south of Basingstoke. It is not known who her parents were but by the time of the 1871 Census she was in the care of her grandparents:

Ten years later she was in service in Whitchurch, about 10 miles west of Basingstoke:

The following year Alice married Henry Taylor [GRO Ref: Basingstoke 2c 351, 1886 (Q4)] by whom she had several further children. Here they are in the 1891 Census, where her first child William is entered as “Charlie Curtis”, suggesting that he had not been fathered by Henry:

By the time of the 1901 Census the family had moved to a different address in Basingstoke, and William was now entered under the Taylor surname with his original forename order:

In the 1911 Census most members of the family were still in Basingstoke. Alice was entered as widowed but the GRO index offers no clear candidate for the death of Henry in the previous decade. It may be that he was still alive but no longer with the family. William also was absent from Alice’s household – he had already joined the army, had become a Lance Corporal and was serving abroad with the 21st (Empress of India’s) Lancers in Cairo:

When the time came for him to serve in the War he transferred to the 9th Lancers, “C” Squadron, with Service Number L/13634. He died of wounds in France/Flanders on January 24th 1918. His  military records gave his residential address as Bagshot at that time and he is duly commemorated on the Bagshot War Memorial besides the Effingham one.

This adds that he was born in Basingstoke and enlisted there; it also confirms that his residence was Bagshot and his rank Sergeant. It associates the 9th Lancers with the “Household Cavalry and Cavalry of the Line (including Yeomanry and Imperial Camel Corps)”. 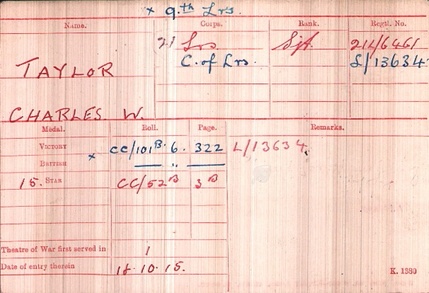