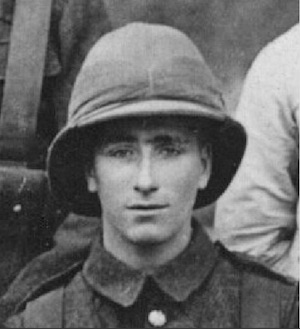 Note: the plaque misrenders his surname as “Scarfe” instead of “Scarff”.

He was not native to Effingham but was residing here, with his parents, when he enlisted.

The 1891 Census finds them living in Harleston, just SE of Starston, next door to William (Snr.)’s father James:

By 1911 the family had moved to Totteridge in Barnet, where William (Snr.) was working as a gardener at a property named “The Lodge”:

Soon afterwards the family moved to Effingham where William (Snr.) worked as a gardener. This is evidenced by the Service Record of William James who in 1913 enlisted for four years’ service in the 5th Bn., East Surrey Regiment, giving his address as Effingham. In the course of the ensuing war he was posted to India where he drowned on February 3rd 1915.

William James’ service record has survived as just four sheets. His Attestation Form states that he enlisted at Leatherhead on June 6th 1913. He gave his birthplace as Norfolk, his age as “17 years 1 month”, his occupation as gardener and his address as “The Cottage, Effingham”. He named his father as his next-of-kin, giving for him the same address with the additional words “The Lodge”, seeming to imply that the cottage was associated with Effingham’s Lodge. Below is his original signature from the form:

He was medically examined the same day at Great Bookham and recorded as being 5’5″ tall with “good” vision and “fair” physical development. He appears to have undergone “annual training” that year at Patcham in West Sussex from July 27th to August 10th 1913, and a year later was deemed to be in “embodied service” from August 5th 1914 onwards.

On October 29th 1914 the battalion embarked at Southampton bound for India, arriving at Bombay on December 2nd. From there it was posted first to the Allahabad Brigade in the 8th Lucknow Division and thence, in August 1915 to the Nowshera Brigade in the 1st Peshawar Division. However, before the latter move William James had already died, in February 1915. His service record states that his service had terminated owing to his “having been drowned”.

This adds nothing to the above other than confirming that he enlisted at Leatherhead.

His medal card is oddly missing from Ancestry’s database. The (rather poor quality) scan below was instead obtained directly from the National Archives: 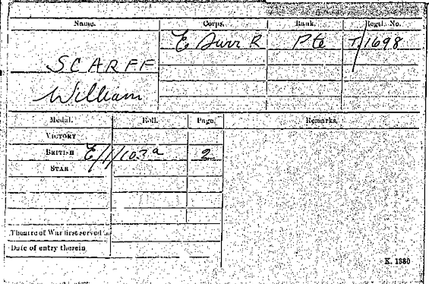