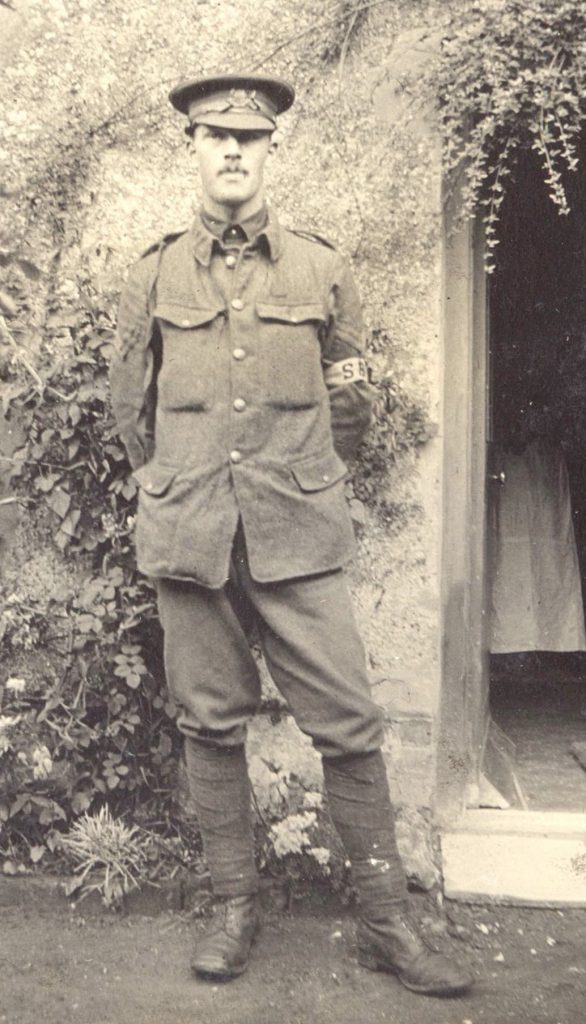 He was born in the village, as was his father, and was evidently still living here at the time he enlisted.

His father was Charles Whittington, born in Effingham in 1845 to parents John and Mary [GRO Ref: Dorking 4 122, 1845 (Q4)]. John, an agricultural labourer, was born in Kirdford near Petworth, West Sussex, whilst Mary was born in Great Bookham; all of their children were born in Effingham.

It is not known how Charles and Ellen came to meet, nor why they married in Croydon. At the time of the 1871 Census Charles was still living with his parents in Effingham, at or near Pond Cottage, and was occupied as a grocer [PRO Ref: RG10 Piece 829 Folio 103 Page 9], whilst Ellen was in service as a kitchenmaid at Tanhurst House in the Broadmoor part of Wotton Parish [PRO Ref: RG10 Piece 827 Folio 101 Page 23].

By 1881 Charles was back in Effingham and working as a carpenter’s labourer, having so far produced four children in, variously, Leatherhead and Croydon; his widowed father John was living next door:

Ten years on, he and Ellen had produced five more children – all in Effingham – and were both working in the laundry business. They were now living at Westmoor Cottage, as also were the parents of Arthur Wells:

The 1911 Census finds Ellen, widowed now, still in Effingham. All her children except the youngest daughter had left. Her son Bob had left home to serve in the Worcestershire Regiment, 3rd Bn., having apparently signed up at age 16 or younger:

The significance of “musician” in the latter record is not yet known, but may indicate that Bob was (for example) a bandsman or a bugler or a drummer. In the War he served as a stretcher bearer in this same battalion, with Service Number 12133. He must have displayed some merit very soon into the action: on October 19th 1914 the Supplement to The London Gazette [Issue 28942, Page 8354] included him in its list of those “Mentioned in Despatches” as follows:

Attack on Spanbroek Mill [at Lindenhoek, Belgium on March 12th 1915]
[much preceding text, then …]

The defence was maintained until dusk. Lieutenant C. G. Martin (Royal Engineers officer who volunteered to lead a small bombing party against a section of the enemy trenches which was holding up the advance. Before he started he was wounded, but, taking no notice, he carried on with the attack which was completely successful. He and his small party held the trench against all counter-attacks for two and a half hours until a general withdrawal was ordered) showed great bravery (Lieut. Martin, R.E., was awarded the V.C.), and Sergeants Ince and Drinkall were conspicuous for ability and determination, grimly holding an improvised sandbag block under a continuous fire of bombs (Sergeants lnce and Drinkall were awarded the D.C.M.). Outside the trench efforts were made to rescue the wounded. Two of the Battalion stretcher-bearers, Corporal B. Whittington and Pte. W. Suffolk crawled forward across the open under heavy fire and brought back stricken men from the German wire entanglements (Corpl. Whittington and Pte. Suffolk were awarded the D.C.M.).

Darkness closed down, and a report on the situation was carried back by Sergeant Ince and Private J. C. Wooton, who returned to Lieut. Martin bearing orders to evacuate the captured trench. The General had decided to accept the failure rather than uselessly to sacrifice more lives. The little party under Lieuts. Martin and Holland made their way back. Game to the last, they sent back all their wounded (the work of removing the wounded was carried out by Sergeant Ince, who personally rescued several men.) before they finally withdrew.

The losses in that disastrous attack were severe. The two attacking companies were almost annihilated.  The casualties of the Battalion were nearly 180, including nine officers killed.
[and further text …]

His award of the Distinguished Conduct Medal for this action was duly reported on June 3rd 1915 in the Supplement to The London Gazette [Issue 29180, Page 5363]:

12133 Acting Corporal Whittington, B. 3rd Battalion, Worcestershire Regiment
For gallant conduct and devotion to duty at Spanbroek Molen on 12th March, 1915, when he crawled through a gateway which was under very heavy machine gun fire, and bandaged the wounded who were lying only 30 yards from the enemy’s trenches.

This adds that he enlisted at Guildford but misleadingly gives his birthplace as Leatherhead. It states that he died in “France & Flanders”. 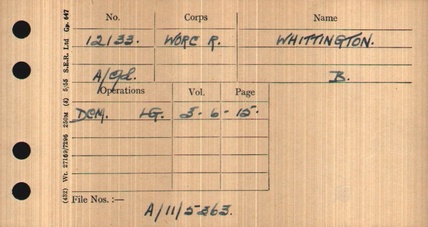