He was not native to Effingham but was working here at George Craig Saunders Pauling’s mansion The Lodge as a gardener in 1911.

Richard’s grandfather was Gaius Roberts, born at Bledlow, Buckinghamshire around 1830. His forename is misrendered as “Gains” in several sources. The 1841 Census finds Gaius aged “11” living at Bledlow with his widowed mother Mary in the “Seven Stars” inn, of which she was the inn keeper [PRO Ref: HO107 Piece 40 Book 4 Folio 8 Page 9]. He has not been found in the 1851 Census but may have been in Middlesex where, in 1853, he married Eliza (née) Miles [GRO Ref: Uxbridge 3a 28, 1853 (Q2)]. She had been born to parents Thomas Miles and Susan (née Dossett) at Rickmansworth, Hertfordshire and baptised there on December 6th 1829 [IGI: Batch C072792].

The 1861 Census finds Gaius and Eliza living in Rickmansworth with just one child Frederick:

By 1911 Richard was in Effingham working as a gardener at The Lodge. The Census finds him living there in the “bothy” with six other gardeners, none of them native to the parish:

He enlisted with the Norfolk Regiment in November 1914 and was posted to Mesopotamia a year later. He died there from typhoid on June 13th 1916 and was buried at the Amara Cemetery.

Richard’s service papers have survived. They record that his attestation for 3 years of service on the Colours took place at Guildford on November 9th 1914. He then gave his age as 27 years and 155 days, his birthplace as “Hertford” and his occupation as gardener. He was medically examined the same day, the report noting that he was 5’103/4″ tall, 148 lbs in weight and had blue eyes and black hair. His physical development was “fair” although there were signs of “old rickets on chest wall, slight bunion(s) on both feet and defective and deficient teeth”, all judged to be trivial. Below is his original signature from the Attestation Form:

He was assigned Service Number 16397 and served initially as a Private in the 10th Bn., Norfolk Regiment. On June 11th 1915 he was appointed unpaid Lance-Corporal. Based in Colchester, later that year, he was – according to his Company Conduct Sheet – reprimanded for neglect of duty on September 2nd and was admonished for an “overstaying” offence on November 1st.

On December 10th 1915 he was posted to Mesopotamia (today’s Iraq), now with the 2nd Battalion, and embarked from Devonport. He disembarked at Basra on January 7th 1916. Six months later, on June 13th, he “died of disease”. His B103 Casualty Form says that he “Died of Paratyphoid Fever” at Amara, but gives his battalion in evident error as the 10th. He was buried at the Amara Cemetery. His next-of-kin (his mother) was notified more than a fortnight later, on June 29th.

On May 12th 1917 his personal effects were sent to Mary Ann who was then living at the Cedars Alms House in Chorley Wood. They comprised “Testament, diary, cig. case, pen knife, photos & disc”. The record of this correctly places him in the 2nd Bn. On December 12th Mary Ann completed the declaration form needed for her to be issued with the standard commemorative plaque and scroll. It was witnessed by the vicar of Chorley Wood and it noted that her husband was also dead – Frederick had died aged “59” just before the War [GRO Ref: Watford 3a 720 1913 (Q3)]. On December 10th 1921 she acknowledged receipt of Richard’s medals. She may have died in 1940, aged “87” [GRO Ref: Watford 3a 2558, 1940 (Q1)].

This adds nothing further to the above. 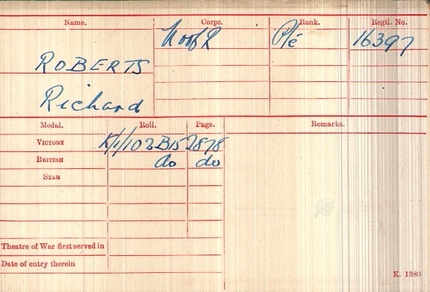