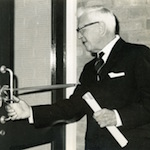 In 1966 a new village hall – named ‘King George’s Hall’ – on the King George V Playing Fields in Effingham was opened by Dr Barnes Neville Wallis. It was the culmination of his thirty-year ambition to see such a facility established for the benefit of Effingham’s residents.

As far as is known, until the late 1870s there had been no building in Effingham having the primary purpose of serving as a venue for public meetings. Before that time meetings were sometimes held in The Prince Blücher, as evidenced by newspaper reports. However, by early 1881 – and perhaps a year or two earlier – a small building had been erected on the corner where the lower (northern) part of The Street meets Orestan Lane. For the next fifty years or so this building served as a village hall and was used by many organisations in a variety of ways. The history of its origin and usage is an interesting one but is not explored further on this page. Today it is used as offices by the company Colets Ltd and still bears the name ‘Old Village Hall’.

It appears that the availability of that building as a village hall came to an end in late 1933 by a decision of its then owner Mr Anthony Nicholas Diamantidi – who owned and occupied Grove House (formerly The Villa) opposite the entrance to Effingham Golf Club – possibly with the intention of selling or letting it. Some regular users now had to make alternative arrangements. These included the National (later St Lawrence) School some of whose pupils had been decanted there while the school completed a major building extension. Another affected user was Effingham Parish Council (EPC) which had been holding its meetings there since early 1902 (but previously in the National School).

By this time another potential venue had arisen. In late 1926 the members of the Effingham Women’s Institute, who since the inauguration of their branch in early 1919 had been meeting mostly in private dwellings, acquired a lease on an old cow shed and spent the next year refurbishing it as a hall for themselves. Although not intended for general use by the public at large, the WI permitted EPC to use the ‘Women’s Institute Hall’ for its monthly Ordinary Meetings from late 1933 onwards. At about this time the WI was also allowing use of its hall for the meetings of the local Scouts. More widely, however, there was now no building in Effingham serving specifically as a venue for public meetings. Even in the earlier use of the Old Village Hall, functions took place there only with the permission of the owner or lease-holder at the time, as some newspaper accounts were careful to acknowledge. The time was ripe for the village to have a hall dedicated to public use; and that hall would require a site to stand on.