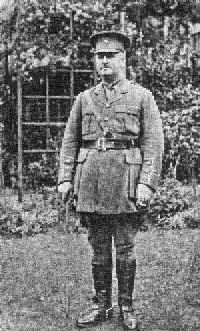 The only connection known so far is that he had evidently been living at Indian Farm in the period leading up to his war service.

The family has not been found in the 1901 Census either. Around 1910-11 both Mowbray and his younger brother John Hulme married. John married – probably in Scotland – to a Scot Janet (née) Cunningham, whilst Mowbray married an Australian Evelyn (née) Baumann  [GRO Ref: Kingston 2a 859, 1910 (Q4)]. They both worked in the London Stock Exchange and in early 1911 Mowbray and his wife were living at John Hulme’s home in Thames Ditton:

Mowbray served successively in the Royal Fusiliers, East Surreys and the Royal West Surreys, as explained on the Roll of Honour website, which states:

On 27th October 1922 the Stock Exchange War memorial was unveiled by The Earl of Balfour, K.G., O.M. The details here are taken from the Order of Service from that day. There are 408 names listed in the memorial booklet.

CAPTAIN MOWBRAY BESSELL, The Queen’s (Royal West Surrey) Regiment, was born on 23 September 1876. He became a member of the Stock Exchange in 1902. A keen supporter of the Volunteer movement, he was for many years a captain in the 3rd Volunteer Battalion, Royal Fusiliers.

On the outbreak of war he applied for a commission and was gazetted Lieutenant in the East Surrey Regiment, being promoted Captain on 1 January 1915 and transferred to The Queen’s Regiment.

He was one of the many victims of the battle of the Somme, being killed in Manion on 15 September 1916 at Flers.

His Colonel wrote: “You know how much we all loved him, and personally I feel I have lost a real and dear friend; never was there a more loyal and hardworking officer. I can’t tell you what I and all the Regiment owe him. He loved his Company and was always working for them, and it was through him that they were able to do what they did last Friday, and go through everything with the greatest dash and in a manner unsurpassed by any Regiment in the British Army.”

The same website also shows the photograph seen at the top of this page. Indian Farm was very convenient for the railway into the City and the Stock Exchange. Possibly this image records him before embarkation for France and just may have been taken at Indian Farm.

He died just a few days short of his 40th birthday, making him one of the older soldiers among those on the Effingham memorial.

This adds nothing to the above.

It appears from this that his medals were despatched in January 1923. By then his wife had moved from Indian Farm to 16, Churston Mansions in Grays Inn Road, London WC1. 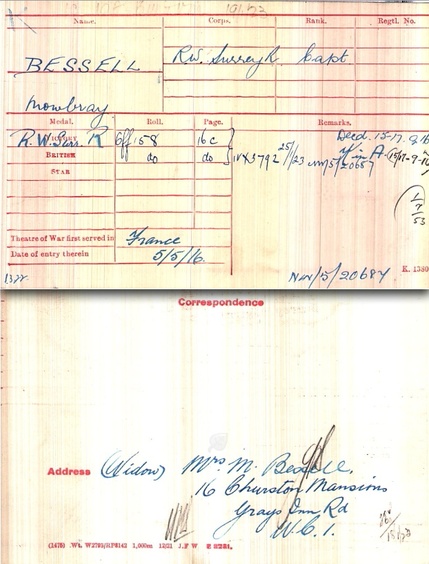