He was not native to Effingham but was stationed in the village as a police constable in the period leading up to the War. He was one of the few named on the Effingham memorial who had already had a military career before the War. He re-enlisted at age 30.

The family is presumed to have still been in Walmer in 1901, but the 1901 Census schedules for that parish have not survived.

Surrey Constabulary records (see below) state that in 1905 (when he would have been aged about 21) Henry joined the Grenadier Guards. The 1911 Census finds him serving with them at the Wellington Barracks in London:

His parents were meanwhile still in Walmer with only their youngest child (now aged 21):

After finishing his seven years with the Guards in 1912, now aged about 28, Henry worked briefly as a grocer’s assistant but then joined the Surrey Constabulary, with whom he served first in Dorking and then in Effingham.

Upon the outbreak of the War Henry rejoined the Grenadier Guards, enlisting at Canterbury. He was killed in action almost straightaway, on October 26th 1914.

The following account of Henry was drawn from the now-defunct “Old and Bold” website holding historic records of the Surrey Constabulary:

Served as a Private 12378 in the 1st Battalion Grenadier Guards. Buried Zantvoorde British cemetery. PC Bullen was the son of Thomas and Mary Bullen. Born at Walmer in Kent he enlisted at Canterbury.

Henry Bullen joined the Surrey Constabulary on 11th November 1912 and was sworn in on 29th November 1912 at Guildford aged 28 before Col. Ricardo and Capt. Briscoe. His appointment number was 1642 and his collar number 257. At the time of his appointment he gave his trade as Grocer’s Assistant, although he had previously served with the Grenadier Guards for seven years from 28th September 1905 to 27th September 1912. He was first stationed at Dorking later moving to Effingham and during his service was promoted from 3rd class to 1st class Constable.

[details on joining the Police]

The Deal, Walmer and Sandwich Roll of Honour provides the picture at the top of this page and also this description of Henry:

A member of a family long connected with Walmer, and son of an old Channel pilot, who went afloat in the lugger Cosmopolite, Pte. Bullen served 7 years in the 1st Batt. Grenadier Guards. He was for a time parade inspector at Walmer, and when recalled to his regiment for the war, was in the Surrey County Constabulary, and about to be married. He was unfortunately killed in action in France, date not stated. His youngest brother, Fred, also in the 1st Grenadier Guards, unhappily lost an arm in the war.

This adds nothing to the above beyond confirming that Henry enlisted at Canterbury. 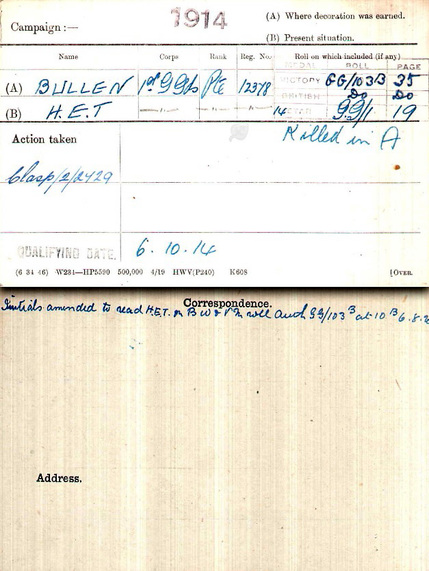