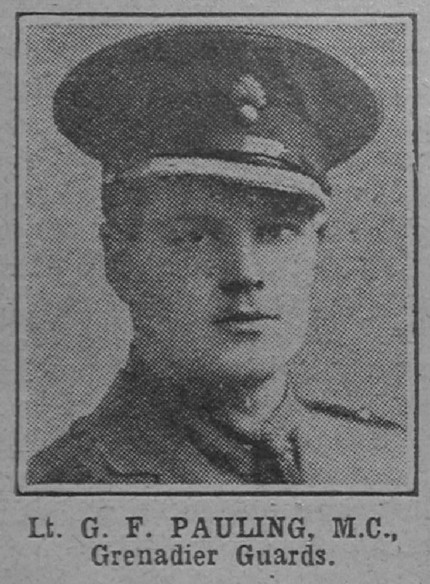 He is not named on the Roll of Honour in St. Lawrence Church, perhaps because he was not regarded as being ‘of’ Effingham parish. He is instead commemorated inside the church of Our Lady of Sorrows, Effingham by a stained glass window of which details are shown below. 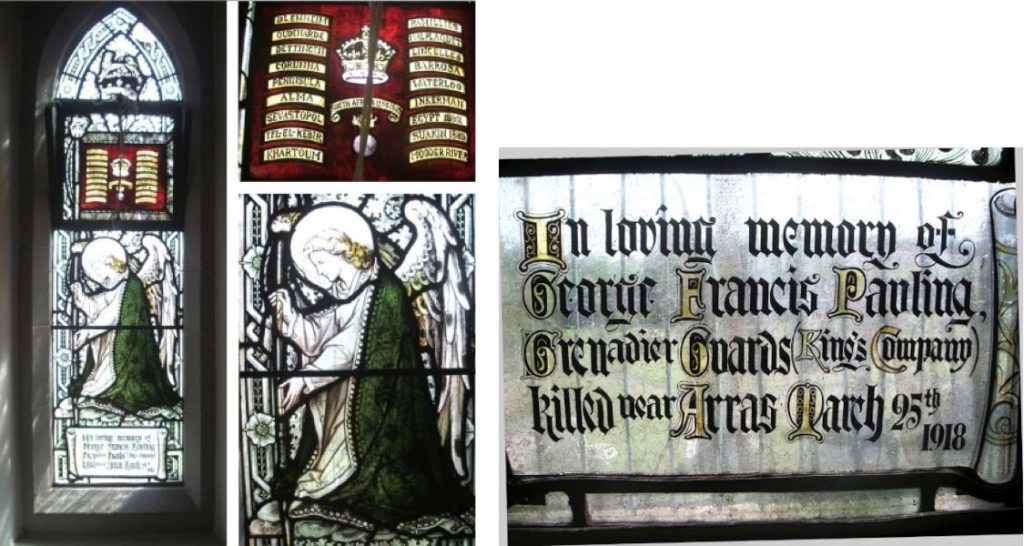 His uncle was the notable railway contractor George Craig Saunders Pauling who lived in Effingham at The Lodge in the early 20th century. Prior to that time the family had no connection with Effingham. His mother was buried in Effingham in 1935, at Our Lady of Sorrows.

Henry was born in Huntingdonshire on November 8th 1857 [GRO Ref: St. Ives 3b 257, 1857 (Q4)]. The 1871 Census finds him with his parents in Middlesex (the census schedule notes that their house had been recently built and did not yet bear a street number or housename):

Marguerite was the sister of George C.S. Pauling’s future wife Dolores (“Lola”), who was born in 1882.

Here is George Francis with his widowed mother in the 1901 Census (she doubtless mis-cited her birthplace as Richmond only because she remembered having lived there in her early childhood):

They were probably occupying part of Llangattock Park House, owned by the Dukes of Beaufort, and pictured below as it looked in 1926: 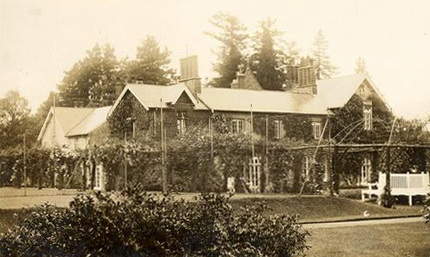 Meanwhile, George Francis was attending a school in Coleshill, Buckinghamshire and was one of just six students boarding there at the time of the census:

The head of the school, Frederick John Allen, had only recently taken the tenancy of the house, which had been named “Nosseghem” (after a place in Belgium) since its construction in 1895. Allen renamed the house (pictured below) “Coleshill Lodge”. 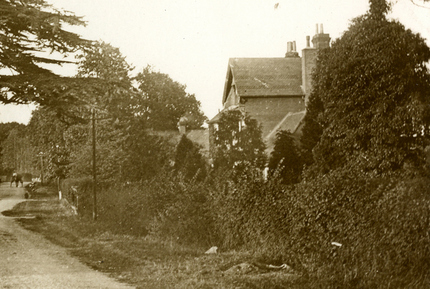 “Lieutenant George Francis Pauling, M.C., Grenadier Guards, killed in action, was [the] only son of the late Henry Clarke Pauling, C.E., and of Mrs. Hill Kelly, of Llanfoist House, Abergavenny. Educated at Beaumont College [then a public school in Old Windsor, Berkshire] and Sandhurst, he was gazetted to the 17th Lancers in August 1914.”

He arrived in France on or about February 17th 1915, according to his medal record (see below). Hammerton (ibid.) goes on to say:

“In January 1916 he exchanged into the Grenadier Guards, and won his M.C. at the Battle of the Somme in that year.”

He was killed near Arras, France on March 25th 1918, during Operation Michael, the Germans’ Spring offensive against the British in the area around Saint-Quentin. He was initially buried there: 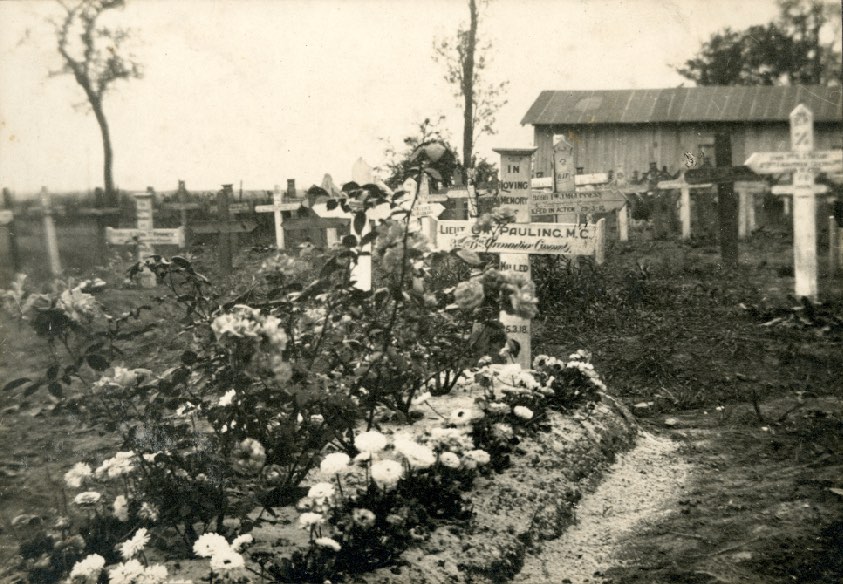 Some details of his MC award and his death are given on the Beaumont Union website which caters primarily for the Old Boys of Beaumont College:

To Sandhurst commission 17th Lancers (his pastimes were racing and hunting). To France Nov 1914. [On] Jan 1916 George transferred to 3rd Bn Grenadiers to see more action. In September he was awarded a MC during the battle of the Somme commanding The King’s Company. — “He led his company and formed a strong point on the left flank, displaying great courage and initiative. Later, he maintained himself for twenty-four hours, causing considerable loss to the enemy until relieved.”

He was wounded at Messines 1917 but returned to duty in Feb 1918. During the German advance (Operation ‘Michael’) in March George was killed in action by a bursting shell as he was getting his men to safety [on] 25 March 1918 [in the] Arras Sector.

Some additional details about him are presented in the book Visiting the Fallen: Arras North by Peter Hughes:

Pauling had seen action on the Somme in September 1019 during the attacks around Ginchy and Lesboeufs. He was also wounded on 30 July the following year at Ypres while his battalion was moving up to its assembly trenches ready for the attack the following day, the start of the Third Battle of Ypres.

The photograph of him shown at the top of this page was published in The War Illustrated magazine on July 27th 1918.

At this time his mother Marguerite was living at Llanfoist House, the substantial Georgian house shown below (present day): 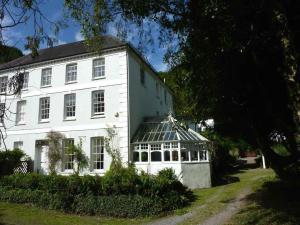 Notice is hereby given, that all creditors and other persons having any claims or demands against the estate of George Francis Pauling, of Llanfoist House, Abergavenny, in the county of Monmouthshire, a Lieutenant in the 3rd Grenadier Guards of His Majesty’s Army (who died on the 25th day of March, 1918, and letters of administration to whose estate were granted by the Principal Probate Registry, on the 30th day of November, 1918, to Margaret Hill Kelly, the administratrix therein named), are hereby required to send the particulars, in writing, of their claims or demands to the undersigned, the Solicitors of the said administratrix, on or before the 28th day of January, 1919, after which date the said administratrix will proceed to distribute the assets of the said deceased amongst the parties entitled thereto, having regard only to the claims and demands of which she shall then have had notice; and she will not be liable for the assets, or any part thereof, so distributed, to any person of whose claim or demand she shall not then have had notice.—

After the War, the remains of George Francis were relocated to the Cabaret-Rouge British Cemetery, Souchez. A window commemorating him was installed in the church of Our Lady of Sorrows in Effingham, presumably by his mother and her sister Lola Pauling.

His medals appear to have been despatched to his mother on July 29th 1922, at which time she had moved to Asfordby Hall (pictured below, but demolished in 1965) in Melton Mowbray, Leicestershire. 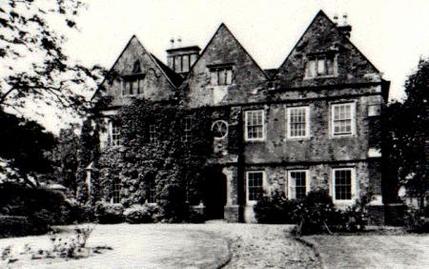 His Officer’s Service Record survives in the National Archives [WO 339/11135] but has not yet been accessed for this study. His Service Number is not yet known.

This adds nothing further to the above.

This mentions the standard campaign medals but not the award of the Military Cross. 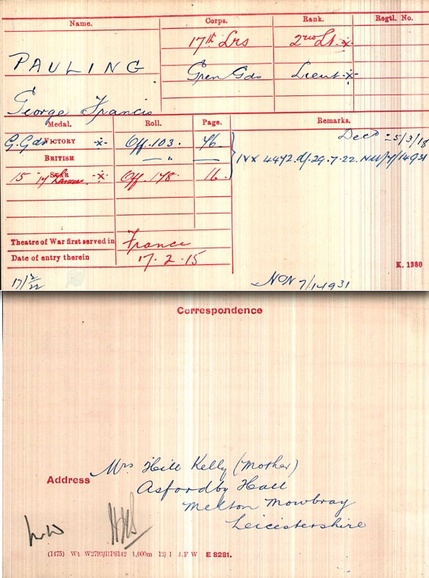