This has not yet been established with absolute certainty but it appears highly likely that the following account correctly identifies his origins.

His SDGW record (see below) claims that he was born in Ockham, where there had indeed been Maskell families for many generations. The GRO birth index offers just two Ockham-born candidates born in the period consistent with later service in the War. One of these is the Frederick Maskell born there in 1881 to parents Edward and Caroline [GRO Ref: Guildford 2a 59, 1881 (Q3)]. It is proven beyond doubt that this Frederick married Annie Mary Morris in 1906, enlisted with the East Kent Regiment (The Buffs) in June 1916 and survived the War to raise several children in Hersham, Walton-upon-Thames. The other is Frederick William Maskell born in Ockham in 1892 [GRO Ref: Guildford 2a 63, 1892 (Q4)].

We believe that the man commemorated on the Effingham memorial is this latter Frederick William.

Frederick William was born illegitimately to Charlotte Maskell, daughter of Thomas and Fruzann. Charlotte was born in Ockham in 1871 [GRO Ref: Guildford 2a 54, 1871 (Q2)], although her older brother Edward had been born in Effingham. In the 1881 Census she is enumerated wrongly as “Catherine”:

She is entered correctly as “Charlotte” in the 1891 Census:

In late 1892 she gave birth to Frederick William, (father unknown) and had him baptised at the (now demolished) church of Hatchford St. Matthew near Ockham, on November 6th 1892, as shown by the baptism register which describes her as a single woman residing at Martyr’s Green in Ockham:

In 1901 Charlotte, still single, was living with her parents at Martyr’s Green. The Census record for their household includes a muddled entry for her son, the enumerator having been apparently confused as to his name, sex and precise age:

The Sarah Maskell appearing here was most probably adopted in adulthood by Thomas and Fruzann; she was almost certainly the daughter of Edward and Caroline Maskell.

Charlotte died aged “43” in 1913 [GRO Ref: Guildford 2a 149, 1913 (Q4)]. It is not known whether Frederick then stayed with his step-father Philip or took up an independent life. It is plausible that when he enlisted for the War in 1914 he considered himself to have no next-of-kin worth citing on his papers, which would be consistent with his medal record (below).

This adds that he was born in Ockham, was residing in Effingham, enlisted at Guildford and that he was killed in action in France/Flanders in the Western European Theatre of war. 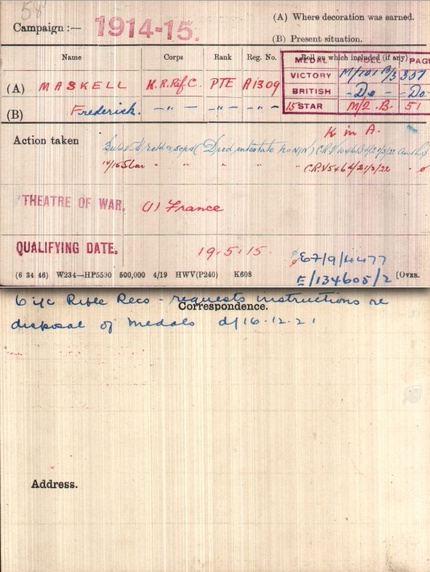 The medal card states that Frederick “Died intestate no N/K [next-of-kin]”, with notes showing that attempts were being made through 1921-22 to assign his medals.