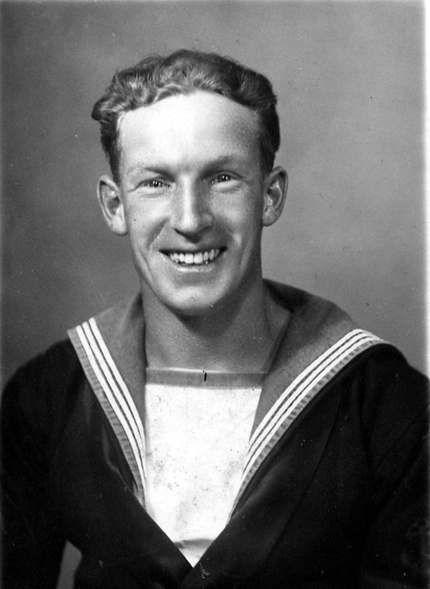 He was not native to Effingham and nor were his parents. In 1948 his parents were living here at 2, Old Post Cottages and his brother Claude’s family was living here at “Dorron”, Mount Pleasant [1948 Electoral Register].

The 1901 Census finds William and Sarah living with their first child in West Hoathly:

By 1911 they had moved to Great Bookham:

Donald Ernest joined the Royal Navy and became a Yeoman of Signals, serving in the War on the “special service vessel” HMS Fidelity. Equipped with guns and torpedo launchers, it sailed in late 1942 from the UK bound for Colombo, India via Capetown, as part of Convoy ONS-154.

On December 28th engine problems caused it to fall behind and a decision was made to head for the Azores, in the course of which it picked up 44 survivors of an earlier attack on the ship Empire Shackleton. On the evening of the 29th it was attacked by several U-boats but evaded their torpedos. However, on the 30th another U-boat struck with two torpedos with the result that she sank instantly, with the loss of 369 men; only 10 men survived.

The War Graves Commission gives the date of Donald’s death as occurring 2 days later, on January 1st 1943; that could be correct only if he had been among those 10 who had been rescued and had died soon afterwards.

The above photo of Donald was found on 2011 on a website about ships created by Gordon Mumford; this website no long exists.

The following further information about the sinking of the Fidelity is drawn from the uboat.net website:

On 28 Dec, 1942, HMS Fidelity (D 57) (Lt C.A.M. Costa) fell behind the convoy ONS-154 due to engine troubles and streamed its torpedo nets, which brought down her speed to 2-3 knots. The next day, the commander decided to head for the Azores and launched her motor torpedo boat HMS MTB-107 and a Kingfisher floatplane for anti-submarine patrol. The aircraft spotted the lifeboats of Empire Shackleton which were towed by the two landing craft to HMS Fidelity. The 44 survivors were picked up and the aircraft and the landing craft were lifted aboard again.

At 21.38 hours on 29 December, U-225 (Leimkühler) fired the stern torpedo at HMS Fidelity, but missed. U-615 (Kapitzky) observed the suspicous vessel during the day and attacked her with five single torpedoes between 22.00 and 23.00 hours, but they either missed or were caught by the torpedo nets. At 16.38 hours on 30 December, the vessel was finally hit by two torpedoes from U-435 and sank immediately after heavy detonations. The U-boat reported a surprising high number of survivors on overcrowded rafts and swimming in the water, none of them were rescued and all drowned in the worsening weather. 274 crew members, 51 Royal Marines and the 44 survivors were lost. The landing craft HMS LCV-752 and HMS LCV-754 on board were lost with the ship. The engines of the MTB broke down and the crew of eight men was later rescued by HMCS Woodstock (K 238) (T/A/Cdr G.H. Griffiths, RCN), which then scuttled the disabled vessel. They were the only survivors apart from two men that had been picked up by HMCS St Laurent (H 83) (A/Cdr G.S. Windeyer, RCN) after the other Kingfisher floatplane from the vessel crashed on take off on 28 December.