He was not native to Effingham and nor were his ancestors, but his parents were living at “Beconridge” in Beech Avenue during at least the period 1938-1946.

The surname is spelt variously as McGowan or MacGowan in the official sources.

Andrew’s great-great grandfather was John McGowan whose origins are unknown. John married at High Hoyland in Yorkshire on October 31st 1820 to Bathshua Elizabeth (née) Tinker [IGI: Batch M106551]. Her forename is a variant of Bathsheba and in some sources she appears under that form. She was born around 1793 in Kirkburton, Yorkshire. Their son John Tinker McGowan was baptised on December 9th 1824 at Cumberworth, Yorkshire [IGI: Batch C107871].

The 1841 Census finds Bathshua living with two children in Leeds, but with no sign of her husband or of her son John Tinker:

John Tinker, who had become a chemist and druggist, married in 1848 to Ellen Whitworth [GRO Ref: Halifax 22 197, 1848 (Q3)]. Her father Charles Whitworth had been born to parents Charles and Sarah on May 6th 1781 and baptised on May 29th at the Cockey Moor Presbyterian Church in Ainsworth, Lancashire [IGI: Batch C086211].

In 1849 John Tinker’s first child Joseph Whitworth McGowan (Andrew’s grandfather) was born [GRO Ref: Leeds 23 455, 1849 (Q4)]. By 1851 he was living in Blundell Place, Leeds whilst his now-widowed mother was nearby in Springfield Place:

In 1859 Ellen produced a son registered at birth as “Willie” [GRO Ref: Leeds 9b 415, 1859 (Q2)] who may have been born blind. The 1861 Census finds her living in Leeds with her children and her father, but her husband John Tinker was absent. Meanwhile, their son Joseph Whitworth was a pupil boarding at Bramham College:

Bramham College had opened in the early 1840s to educate sons of the principal families in Yorkshire, enjoying a very high reputation. A tragic outbreak of cholera in 1869 killed several of its pupils, forcing its subsequent decline and closure.

The 1871 Census finds Ellen widowed and living with three children in Ilkley, whilst her son Joseph Whitworth was working as an engineering manager in Lancashire together with a younger brother Charles (born in 1863) who has not been found in the preceding census and may have been with his father.

By 1881 (and ever afterwards) Ellen was calling herself “Helen Spear McGowan”. The reason is not yet known but “Spear” was probably the surname of a friend or partner she had acquired. The 1881 Census finds her with the same three children in the Headingley district of Leeds, whilst Joseph Whitworth was living with just a housekeeper in the Beswick district of Manchester:

Joseph Whitworth and his wife and children have not been found in the 1901 Census despite extensive searching, but his mother Ellen (“Helen”) was by now living in Bournemouth:

In 1904 Ivor obtained his Higher Certificate of Education at Dover College. He subsequently went up to Jesus College, University of Cambridge to read law. He was called to the Bar in 1909. In the third quarter of that same year he married in Ireland – in the Ballymoney district, Londonderry – to Agnes Caroline (née) Murphy. She had been born in Londonderry on November 12th 1877 to parents Andrew Charles and his wife Agnes Marshall (née Tillie) [IGI: Batch C018201]. By 1911 had moved to Surrey and become a father.

The London Telephone Directory for this period indicates that Ivor was practising at 7, New Square in London [BT Archives, British Phone Books 1880-1894].

“For conspicuous gallantry and ability in command of his battery during the operations in the Forest of Mormal from 3rd to 9th November 1918. He handled his battery with great skill and carried out several difficult reconnaissances, obtaining information of great value. On 5th November, after making a daring reconnaissance, he returned and brought his battery into action, and supported the infantry with great success, engaging several machine guns that were holding up the advance. Throughout he showed great energy and resource.” 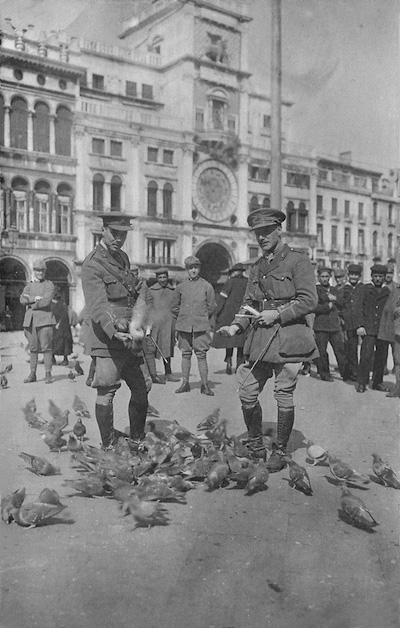 Ivor (foreground, right-most) in France during the war.

Ivor applied for his medals on September 21st 1921 and gave his address then as 28a, Sinclair Road in West Kensington, W14. His Medal Roll card in the National Archives notes that he had served in the France theatre of war from June 2nd 1916.

The McGowans appear to have arrived in Effingham in the mid-1930s. In 1935 Ivor, his wife, Andrew and others were living at “Beconridge” on Beech Avenue [Electoral Register]. Andrew had attended the Charterhouse School from 1926 to 1930 and had then gone into law, like his father, except that he became a solicitor rather than a barrister. After a spell serving with the Sherwood Foresters he joined the Royal Indian Army Service Corps. He died in a Bombay hospital on April 18th 1943 and was buried at the Kirkee cemetery near Khadki in Poona. The record of his death held by the Commonwealth War Graves Commission states that he had acquired Indian nationality. A newspaper report on April 30th published this brief obituary [Andrews Newspapers Index Cards, 1790-1976]: 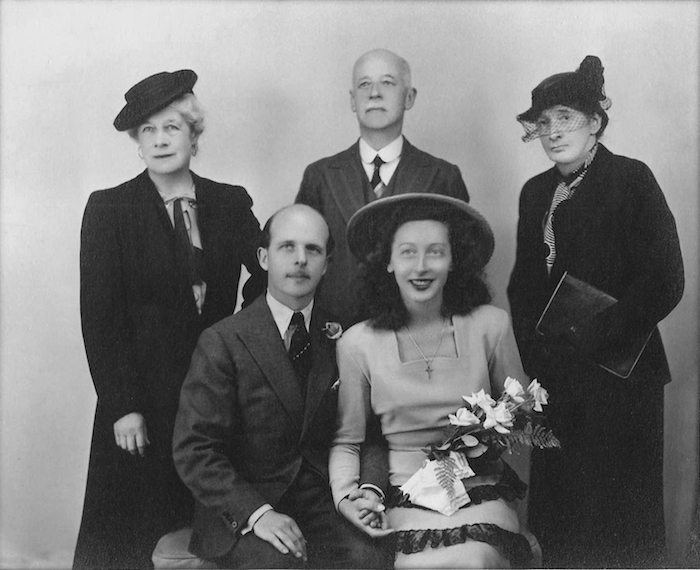 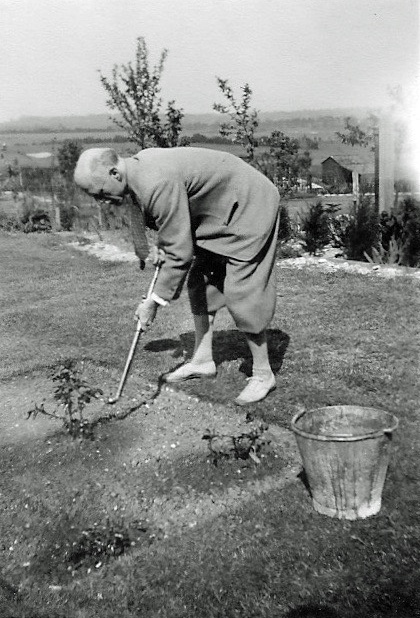 Left: the marriage of Alexander and Alba in 1946; at the rear are his parents and (right-most) his former nanny “Mimi”.

Right: Ivor in his garden at “Beconridge” in Beech Avenue, Effingham.