He was not native to Effingham and nor were his parents. The Commonwealth War Graves Commission’s record (see below) of Allan’s death gives Effingham as an address but this may relate to his brother Peter Talcott Curry who, after the War, lived at “Pilgrims” near Effingham’s main crossroads on Guildford Road.

Allan’s great-great-grandfather was Thomas Finch Curry, born on the Isle of Man to parents John Curry and Ann (née Cosnahan); he was baptised there at St. Matthew’s in Douglas, firstly on January 3rd 1803 and then a second time with younger siblings on June 10th 1806 [IGI: Batch C038041]. A descendant of the family reports that John Curry had been a Royal Navy surgeon and that Thomas Finch trained as both a doctor and an attorney, eventually rising to Coroner for Liverpool. He is the subject of the book Philip Finch Curry and the Popular Politics of Mid-Victorian Liverpool written by retired coroner Gordon Henry Harper Glasgow [Publ. European Studies Research Institute, 2001].

Philip Woods remarried in 1865 to Sophia Mary Quinton (possibly a widow) [GRO Ref: Clifton 6a 213, 1865 (Q1)]; the IGI records this marriage as taking place at St. John the Evangelist in Clifton on February 27th, but the index transcription misrenders her surname as “Winton”.

On August 28th 1866 The London Gazette [Issue 23156, Page 4768] reported that Philip Woods, trading in Liverpool as a cotton broker under the firm of “P.W. Curry and Co.”, with no partner, had registered a deed to convey all his estates and effects to the trustees of his creditors, having become bankrupt. No subsequent record has been found of him, and he may well have emigrated.

Philip Eddowes – the future grandfather of Allan – has not been found in the 1871 Census, but the 1881 Census finds him in the household of his maternal widowed grandfather Thomas Stanton Eddowes:

By 1911 the family had moved from London to Bassett in North Stoneham parish, a few miles north-east of Southampton:

At this time Philip Eddowes was the port manager for the White Star Line (Southampton) and was in overall charge of their local office Canute House, a position of huge responsibility. It must have been the worst time of his life a year later when, on April 14th 1912, the White Star’s new transatlantic liner “Titanic” famously sank on her maiden voyage from Southampton bound for New York. His office was beseiged by desperate relatives with whom he had to deal personally as best he could amid all the confusion as to who had, or had not, survived.

By 1917 Francis Henry had been doing plenty of travelling. On September 23rd of that year he arrived at Liverpool having sailed first class from New York on the American Line’s ship “St. Paul”. The manifest [PRO Ref: BT26 Piece 637 Item 73] describes him as a merchant aged 26 whose last permanent residence had been in India; it gave his home address as Thanet House, Bassett. He was also serving as a lieutenant in the Royal Air Service, although this fact is not recorded on the manifest.

His future wife was an American woman named Henrietta (née) Talcott. In 1918 she was mentioned in The New York Times [Issue June 30th 1918]:

Ensign Ralph Waldo Marshall, U.S.N.R.F., a son of Mr. and Mrs. Waldo Hall Marshall, and Miss Marjorie Sillcocks, a daughter of Mr. and Mrs. Warren S. Sillcocks of 137 West Seventy-sixth Street, were married yesterday afternoon in the chantry of St. Thomas’s Church. Miss Henrietta Talcott was the maid of honour …

Mrs. Edward Wyckoff Harris of 13 East Sixty-third Street announces the engagement of her daughter, Miss Henrietta Talcott, to Francis H. Curry, son of Mr. and Mrs. Philip E. Curry of Southampton, England. Mr. Curry was recently discharged from the British Army, having been a member of the Royal Air Force. No date has been set for the wedding.

Miss Henrietta Talcott, daughter by a former marriage of Mrs. Edward Wyckoff Harris, of New York and Rye, will be married to Lieutenant Francis H. Curry, Royal Air Force, today in the Presbyterian Church, Rye. The bride will be attended by her sister, Mrs. Horace D. Newson, of New York; Mrs. Ralph Marshall, Miss Anna Sherman, Miss Elizabeth Clark and Miss Natalie Browning. Major Philip E. [in error – A. (Arthur)] Curry, of the British army, will be his brother’s best man. The bridegroom is a son of Mr. and Mrs. Philip E. Curry, of Southampton, England.

The wedding was described in more detail (and more accurately) the next day in The New York Times [Issue July 20th 1919]:

Miss Henrietta Talcott, daughter of Mrs. Edward Wyckoff Harris of this city and Rye, N.Y., and Francis H. Curry of Southampton, England, were married yesterday afternoon at 4 o’clock in the Presbyterian Church at Rye. The Rev. Charles G. Seawall, the pastor of the church, and the Rev. Frank Childs of Fairfield, Conn., officiated at the ceremony.

The bride wore a gown of white embroidered satin with a veil of rose point. She was attended by her sister, Mrs. Horace D. Newson and by Mrs. Ralph Marshall, the Misses Anna Sherman, Natalie Browning and Elizabeth Clark, who wore gowns of orchid coloured chiffon. Major Philip A. Curry, O.B.E., of the British Army, acted as best man for his brother. The ushers were Captain J.H. Barlow of the British Army, Henry Rolland, and Herbert and Philip Godwin.

A reception followed at the home of the bride’s mother. The pair will sail on Tuesday for Southampton before going to Buenos Aires, where Mr. Curry is to be associated with the Standard Oil Company.

Mr. Curry was recently discharged from the Royal Air Service, in which he had served as a Lieutenant for three years. His brother, Major Curry, received the D.S.M. for his services with the British Ministry of Shipping in connection with the American overseas troop movement.

Francis Henry and Henrietta duly sailed on the White Star line’s ship “Celtic” from New York to Southampton, arriving there on July 31st. The manifest [PRO Ref: BT26 Piece 656 Item 17] describes him as aged 27 and occupied in “Shipping”, and her as aged 22. Their addresses were both given as Thanet House, Bassett.

Shortly afterwards they did indeed go out to Argentina, where they produced two children in rapid succession, Peter Talcott Curry and Allan Eddowes Curry, born in Buenos Aires. They visited England in 1922, sailing first class from New York on the White Star line’s ship “Majestic” and arriving at Southampton on August 4th. On the manifest [PRO Ref: BT26 Piece 728 Item 29] Francis Henry again had his occupation entered as “Shipping”. Their proposed address was Thanet House, Bassett. The ages of Peter and Allan were given as 2 and 1. Peter had been born on March 15th 1920.

Meanwhile, Philip Eddowes had co-founded, in 1921, the Southampton Shipping Golfing Society and become its first President. The society continues to the present day and in 2011 its website recorded that:

This year [2011] our society is 90 years old, which makes it one of the oldest in England.

The vision of its first President, Philip Curry the manager of the White Star Line (Titanic) in Southampton, was to further friendly relations in the Port via the Golf Courses. Since those magnificent days, many of the major shipping lines of the day are now a distant memory; however the vision has not changed.

In April 1924 it was reported in the White Star Magazine that a Shipping Companies Golf Tournament was first organised in 1921, for which the White Star Line gave a handsome silver Cup. Mr. P. E. Curry local manager for the White Star Line was elected as the first President and by 1923 the society had over 100 members.

After their 1922 visit to England Francis Henry and Henrietta returned to Argentina where, around 1925, they produced a child Suzanne Curry. They visited England again in 1928, sailing cabin class from Montreal, Quebec on the White Star line’s ship “Megantic” and arriving at Southampton on (again) August 4th. The ages of the children were entered on the manifest [PRO Ref: BT26 Piece 876 Item 8] as 8, 7 and 3. Francis Henry’s occupation was still “Shipping” and, once again, they were destined for Thanet House. Also in their party was a governess Hilda Crantham [or Grantham – unclear] aged 22.

After returning again to Argentina Francis Henry and Henrietta made another visit to England in 1929, sailing first class from Buenos Aires on the Royal Mail Steam Packet Company’s ship “Alcantara”, calling at ports Rio de Janeiro, Montevideo and Santos before arriving at Southampton on January 23rd. This time they had just Suzanne with them, aged 4. The manifest [PRO Ref: BT26 Piece 910 Item 7] gave Francis Henry’s occupation as “Shipping” and their proposed address as  4, Upper George Street, Bryanston Square in London (just north of Marble Arch).

On September 15th 1930 the Southampton Shipping Golfing Society staged a putting competition at Stoneham where an excellent photograph was taken of Philip Eddowes and fellow members. The image below is a cropped section showing him alone. 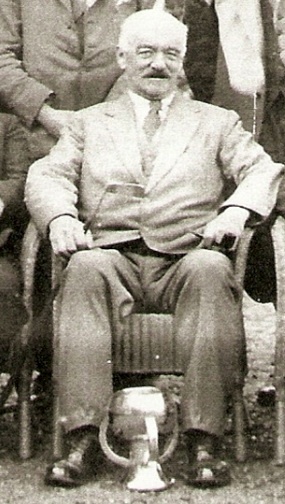 The full picture can be viewed here:

Francis Henry and Henrietta must have visited America in the early 1930s because in 1932 they sailed back from New York to Southampton, arriving there on July 28th; they had travelled first class on the White Star Line’s “Olympic”, sister ship to the “Titanic”. Their country of last permanent residence was England and their destination address was now “Glenholm”, Lake Road in Wimbledon SW19. The manifest [PRO Ref: BT26 Piece 1002 Item 16] gave his occupation as merchant. Accompanying them was a student Patricia Curry aged 13 whose country of last permanent residence was Canada and whose destination address was Thanet House in Bassett; she may have been a daughter of Francis Henry’s brother Philip Arthur.

The family later visited America again. In 1937 they returned from New York to England, having sailed cabin class on the United States Lines ship “Washington”, and arrived at Plymouth on August 31st. The party comprised Francis Henry and Henrietta and their three children, the latter all described as students. The manifest [PRO Ref: BT26 Piece 1131 Item 45] described Francis Henry simply as a “Director” and gave the family’s destination address as Kingston Hill in Surrey.

We currently know nothing of the war service of their son Allan Eddowes other than that he served as a Lieutenant in the Royal Naval Volunteer Reserve and was killed in action on the minesweeper H.M.S. “Pylades when it was sunk on July 8th 1944 during the Normandy landings at Juno beach. Struck in succession by two torpedos launched from German “Neger” midget submarines (or “human torpedos”), she had capsized within minutes. Most of her 80 crew survived but 11 men were lost, including Allan Eddowes. He is commemorated on the Portsmouth Naval Memorial and also on the Bembridge War Memorial on the Isle of Wight.

Meanwhile, Allan’s brother Peter Talcott had joined the Royal Air Force Volunteer Reserve and risen to Pilot Officer. In 1941 he was awarded the George Medal, the following citation being published by The London Gazette on July 11th 1941:

This officer and airman displayed courageous conduct when an aircraft, with a full load of bombs, crashed and burst into flames one night in May, 1941. They succeeded in extricating two of the crew who were trapped in the aircraft, while the bombs were actually exploding.

The GRO index appears not to record the deaths of Francis Henry and Henrietta, who may have died abroad.

In 1994 a book Titanic Voices: Memories from the Fateful Voyage [Editors Donald Hyslop et. al.] was published by Sutton Publishing and Southampton City Council. It presents various oral histories of people caught up in that great disaster and its index has references to Philip Eddowes on at least a dozen pages. 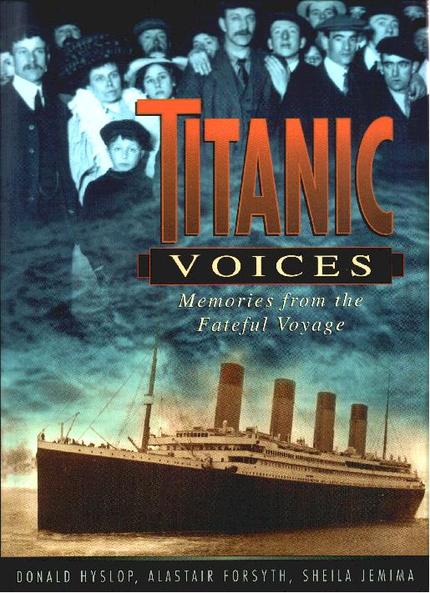 In April 2010 the two mayors of Eastleigh and Southampton joined in a commemoration to the life of Philip Eddowes Curry and the staff of the White Star Line at St. Nicholas Church in North Stoneham followed by the laying upon his grave there of a wreath and of the White Star flag from the ship “Majestic”. 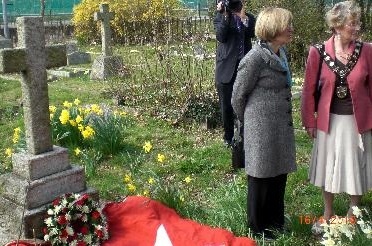 Ceremony at the grave in North Stoneham of Philip Eddowes Curry, April 2010.