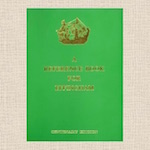 A REFERENCE BOOK FOR EFFINGHAM

This page describes the printed work A Reference Book for Effingham which was produced in 1994 by Effingham Parish Council.

The Reference Book was produced in 1994 in recognition of that year being the centenary of the original formation of Effingham Parish Council in 1894. However, it was intended also to have a practical value, as expressed in its Introduction:

“Its purpose is to provide background information to Councillors about developments in Effingham over the last fifty or so years, so that they may be better able to understand the present and consider the future.”

Physically, the ‘book’ consists of a green ring binder with gold embossed logo and title on its front cover, accommodating hole-punched A4 printed pages. The main body contains 35 pages of which about half are used to describe the post-war developments that had taken place in the village, in respect of housing, highways, businesses, the Conservation Area, the Common, footpaths and the Allotments, among other things. The remaining pages give more detailed accounts of the village’s churches, schools, Residents  and Ratepayers Association, the Housing Association and some community groups. After this there are about ten pages given to the first three Appendices A, B, C. The Introduction also expresses the hope that:

“… future generations of Parish Councillors … will keep it reasonably up to date so that in their time, as in ours, it can truthfully be said that Effingham is a caring community.”

However, in the event almost no updating took place. 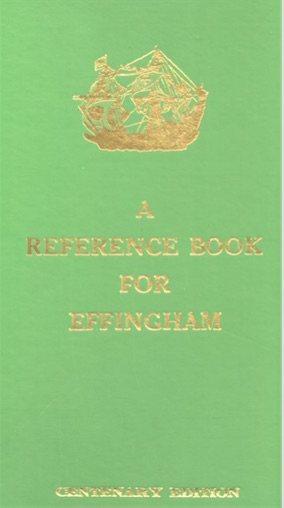 The original Reference Book from 1994 can be viewed using this button.

The primary version of the Reference Book as it exists today contains a further two Appendices D, E, spanning nearly ten pages, which were added a few years after 1994 and are listed in the current index.

The additional Appendices can be viewed using this button.

Much later, further updates and corrections were planned for a second edition that was to be produced in 2008. It never was produced.
The proposed modifications are evident only from pencilled notes and annotations that were added, somewhat arbitrarily, to three different secondary copies of the primary version. The intended updates included:

• adding a folding map of the parish;

• entering an account of the Howard of Effingham School, for which the primary version had provided
only a blank page with a title at the top;

• noting various new developments that had occurred in the intervening years.

The intended corrections, which should be borne in mind when reading the primary version, included:

• changing “the vicarage” to “the old vicarage” in relation to the property now at the corner of Church Street
and Lower Road (but at the risk of confusing this with the “Old Vicarage” next to St Lawrence Church);

• noting that the Effingham Junction station car park had been constructed years before the Railway Cottages had
been demolished, so correcting the primary version’s impression that these events had been related;

• correcting the name of the (then) Lord of the Manor of Effingham East Court from “Mrs Forder” to
“Mrs Foulder” (although this “correction” was itself incorrect).

The Reference Book contains some uncorrected details, including the following:

• page 3 refers to the Manor of “Critham”, which should read “Dritham”;

• page 3 claims that Effingham in Illinois was named after Thomas Howard, 3rd Earl of Nottingham,
but this is not the case – it was named after an English surveyor, General Edward Effingham;

• page 8 refers to “Mrs Forder”, which should read “Mrs Faulder” – the then Lord of Effingham East Court Manor,
Carolyn Mary (née Calburn) Faulder (today Bainton) who was one of the daughters of Charles Clement Calburn, in turn
one of the sons of Robert Reitmeyer Calburn;

• page 26 gives the surname of a head teacher at St Lawrence School as Pender – it was Spencer;