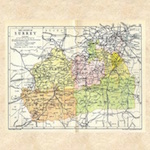 ELHG has a considerable collection of scans of O.S. maps for Effingham and neighbouring parishes. They are mostly at the scale of 25 (strictly 25.344) inches to the mile. The earliest ones in our collection begin in the late 1860s and the latest in the mid-1930s.

The 25″ scale was adopted for rural areas in the 1850s, being viewed as more convenient for many purposes than the earlier 6″ scale used in the first half of the 19th century. The new scale was the basis of the County Series O.S. maps. Each 6″ parent sheet was divided into a 4×4 grid of sixteen 25″ sub-sheets each representing an area on the ground measuring 1.5 miles east-to-west and 1 mile north-to-south. The precise scale of these was 1:2500.

Each 6″ parent sheet had been assigned an identifier in the form of a Roman numeral and the 25″ sub-sheets for each parent were numbered (in Arabic numerals) 1-16. The result was to assign to each 25″ inch County Series map a unique Sheet Number, such as XXV.5 (which happens to be the one showing Effingham village). England and Wales together required nearly ninety thousand such maps to achieve full coverage.

The following sources provide good introductions to the Ordnance Survey.

In particular the National Library of Scotland offers the following link for viewing the 25″ O.S. maps of Surrey at high resolution:

Effingham and the County Series 25″ Maps

The current parish of Effingham is covered by seven maps in this series, using elements of grids XVIII, XXIV and (mostly) XXV, as shown in the schematic below. The current parish boundary is shown in blue and the principal roads (as they are today) in black. Sheets XXIV.4 and XXV.6 include only very small parts of the parish.

The old boundary encompassed a slightly larger area, extending somewhat eastwards and southwards from the current boundary. In order to see this on the maps in this series one must also view sheets XXV.10 (east of XXV.9), XXV.14 (east of XXV.13) and XXXIII.1 (south of XXV.13). 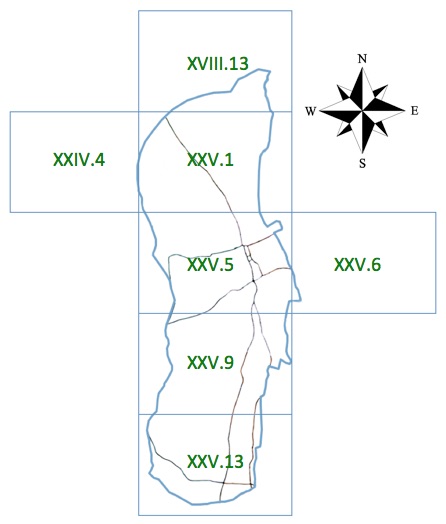 Dates of the County Series 25″ Maps

Broadly speaking, from the late 1860s up to the mid-1930s the County Series 25″ Maps progressed through just four editions.

The maps emerging from the surveys during 1867-71 can be termed the “First Edition”, although the maps themselves bore no such title.
A quarter of a century passed before the next revision which was undertaken mostly in 1894 and to a lesser extent in 1895; most of the resulting maps bear the official title “Second Edition 1896” but some put 1895.

In the 20th century the first major revision, together with relevelling, was made during 1912-13 to produce a third edition whose maps bear the title “Edition of 1914”. Another twenty years passed before the next revision in 1934, although some revision took place during 1932 as well; this fourth edition bears the title “Edition of 1934”. Some further selective revisions took place before the War, in 1937 for instance, but not such as to define an entire new edition.

ELHG has scans of 74 maps in the series, of which 35 have been made accessible here to cover the parish and neighbouring areas to the east.

In the grids below each non-empty cell is a button – click it to view the cell’s map.

For cells lacking buttons, use the link above to the National Library of Scotland to view the corresponding maps.

Great numbers of maps of various parts of Britain were produced in earlier centuries. In most cases it is not until the 18th century that much useful detail begins appearing on them. Here we present just a few examples of some early maps showing Effingham. The thumbs on the right can be clicked to view the maps in detail.

Christopher Saxton : map of Surrey, 1575
The first nationwide county maps were produced, at the direction of Queen Elizabeth I, by the Yorkshireman Christopher Saxton, born in the early 1840s. This work was financed through the offices of William Cecil, 1st Baron Burghley, Elizabeth’s chief advisor and at that time her Lord High Treasurer. Saxton’s survey of England began in 1574 and of Wales in 1577. The entire exercise was completed by 1578 and all the county maps were assembled into a single bound work Atlas of the Counties of England in 1579, although individual maps from it had been issued a little earlier. The map of Surrey, dated 1575, names Effingham and indicates that it had a church, but nothing more. 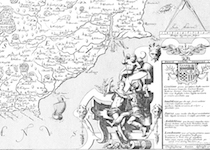 John Norden : map of Surrey, 1594
Saxton’s work was followed soon afterwards, but more selectively, by his near contemporary John Norden. In the early 1590s Norden produced maps and descriptions of several south-eastern counties and a few areas further afield. He presented these studies to Queen Elizabeth as the work A Chorographical Description of the severall Shires and Islands of Middlesex, Essex, Surrey, Sussex, Hampshire, Weighte, Guernsey and Jersey, performed by the traveyle and view of John Norden, 1595. His map of Surrey, dated 1594, names Effingham and indicates its status as a parish, but nothing more.

John Speed : map of Surrey, 1610
Born in the 1550s in Cheshire, John Speed began his working life as a tailor. Later in life he developed scholarly capabilities for which he earned the recognition of Queen Elizabeth, to whom he presented some of his early cartographical studies. During the first decade of the 17th century, now in the reign of James I, he embarked on mapping Great Britain, resulting in his publication in 1611 of an atlas of county maps entitled The Theatre of the Empire of Great Britaine. It included maps of Scotland and Ireland as well as of England and Wales. His map of Surrey, dated 1610, names Effingham and indicates that it had a church, but nothing more.

Emanuel Bowen : map of Surrey, 1753
Moving forward a century and a half, we find more detailed maps being produced that show roads and habitations. Emanual Bowen, born in Wales in 1694, was a distinguished engraver and cartographer who became Royal Mapmaker to King George II. He produced many sets of maps not only for Britain but also for other parts of the world. A characteristic of many of them was his embellishment of them with dense notes on local details he felt were of interest, such as the fact that Norbury’s orchard contained nearly a thousand walnut trees. In his 1753 map of Surrey, Effingham is shown with some roads and properties dotted about but, curiously, no indication of its church (unlike Great Bookham whose church is marked very prominently); the Common is also named, as are the brick kilns (misspelled “Kills”) at its north-western end. 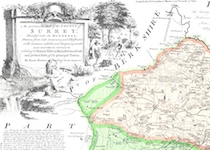 John Rocque : map of Surrey, 1770
John Rocque was born in France in about 1704 but arrived in England as a child and remained here thereafter. He made his career as an engraver and also as a maker and seller of maps. His major work, which occupied him for over a decade, was the production of a 24-sheet highly detailed map of London, published in 1746. In recognition of this and other achievements he was appointed in 1751 as cartographer to Frederick, Prince of Wales. He produced several editions of Surrey maps, including one in 1770. This latter map shows Effingham with the road layout familiar to us today as well as a number of recognizable buildings, including St Lawrence Church; it also shows the Common, with its brick kilns, in some detail. 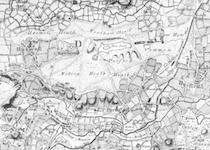 John and Charles Walker : map of Surrey, 1845
These two brothers, born in the late 18th century, were the driving force in their family firm of engravers, publishers and mapmakers. Among their best known works was the British Atlas containing nearly fifty county maps for England and Wales. These were produced in the approximate period 1835-42 and included the main-line railways then in place. An edition of their Surrey county map was published by Longman et al in 1845 and names Effingham, the Common and Lee Wood; it is, however, much less detailed than Rocque’s map. 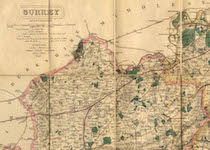 The Effingham Tithe Map of 1842

An excellent introduction to the Tithe Maps and associated Apportionment Schedules can be read on the website of the
Surrey History Centre (SHC) using this button:

The tithe data for any particular tithe district in Surrey can be purchased from SHC on disk. Some extracts from ELHG’s disk for Effingham appear here by kind permission of SHC.

Firstly, clicking on the image opposite brings into view the map for the entire district. Note: this website’s lightbox magnifier is not good enough to render the map’s fine details clearly. Instead, right-click on the image and elect to open it in a new browser tab or window; the magnifier then presents the map in full detail.

The two further buttons below present, respectively, the summary Tithe Apportionment and the schedule of detailed rental calculations for each plot.

(Images and files in this section) 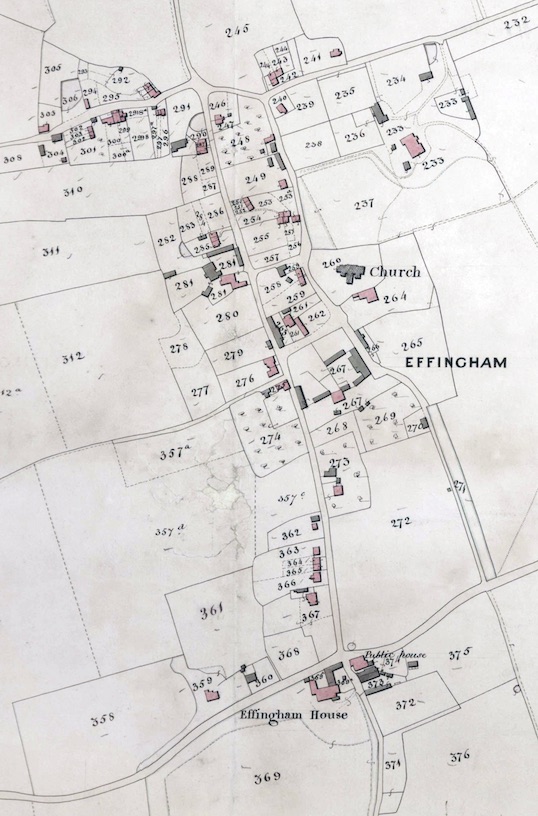