“Our Memories of Woodlands Road”

By 1961 both my parents had passed away and Derek (who lodged with us) and I were told we could not take on the tenancy of the house and that left us looking for somewhere to live, we heard of a plot for sale in Woodlands Road and this is how we remember it from those days.

As you entered the road on the left was Runmore Garage (West Surrey Motors) owned and run by Arthur Fowler who was very prominent in stock car racing and Don Townsend, this was the old style garage that did repairs and still had a forecourt with petrol pumps and an attendant in a kiosk who still actually served the petrol. This is now owned by Dagenham Motors.

Buses from Leatherhead used the triangle at the bottom of the road which has since been altered, to turn round and also to park before returning.

Opposite Runmore garage was No 2, a café called “Stepping Stones”, owned by A. A. Hammond, this later caught fire and the roof was badly damaged.

Mr. Boxall who lived in a house round the corner on the A246 was a builder and had an entrance to his builder’s yard in Woodlands Road.

For those who are superstitious there isn’t a number 13 in the road.

No. 50, The Stores, (General Stores) on the lower corner with Strathcona was the Post Office and grocery shop and we even had a post box outside which was suddenly uprooted (when it ceased to be a post office), and replanted at the bottom of the road. This had been much more convenient for us being halfway, not so far to walk to post a letter and easier than going to the bottom of the road as we now have to.

The Post Office then moved to what was at that time the grocery shop at the bottom of the road on the A246 and is now the Indian Restaurant.

No. 52, Drayton House, on the upper corner at Strathcona was the Ironmongers shop owned and run by Henry and Minnie Haunton; he delivered paraffin and other small items to customers in the road on his bicycle.

67, *(77) Miss Parker at Woodlands Farm grazed and reared cattle and also kept chicken and sold eggs, this was all open land from Woodlands Road through to Chalkpit Lane and had been reserved for a new road Route 37. She also worked for the Post Office delivering the post in East Horsley.

The Crandleys had a couple of Morris Oxford vans that they converted into articulated vehicles to collect swill for their pigs.

In the winter when our road was blocked with snow they would fit a snowplough to the front of one of the vans and try to keep the road clear.

83, (93) Red Gables, Peter and Dorothy Kern had this bungalow built and lived there from 1946, electricity came to the road about 1948 supplied by overhead cables.

106, (120) Grenville, R F Scott. We understand this was where Ken Tyrell’s Racing cars were first made and was later owned by Mr. Scott who was a builder and a renowned maker of rocking horses.

107, (117) Muskoka R W Seabrook, who bred pigs and experimented with an automatic feeding system. Later on the Fitches lived here and also reared pigs and then changed to having horses. Now owned by the Belshams’ DB Gardens.

122, (132), Charlie Gibson had his builders yard here and built several new houses in the road.

We first came to live in Woodlands Road from Fulkes’ Cottages West Horsley on August bank holiday 1961 having bought a plot covered in nettles with an old shed at the top then known as “Pineview” from George Croydon which later became number 85 and then 95.

The numbers were altered around the early seventies when the open land towards the middle of the road was developed after it was decided not to build the new bypass then proposed as Route 37, we then set about clearing the site having bought the ground for the then enormous sum of £1850. This seemed a lot of money at the time and we had to take the plunge especially as we were already in the building trade.

When we took over the site there was a large caravan in the middle of the plot with two elderly women and lots of dogs living in it, George Croydon had to evict them (much to our relief) as part of the sale. Plans having been drawn up and passed by Leatherhead Urban District Council we started building.

August bank holiday 1961 we moved into the shed already existing at the top of the site and lived in it while we built the bungalow. The shed had been used as a workshop since the 1920s by George Croydon for making and selling various fencing panels, timber garages and wooden products and he actually lived there on and off.

About this time we acquired a dog, he was a Manchester terrier called Rex.

We had to renovate The Shack as we called it, to make it habitable and had electricity connected to the overhead cable that was already there and a meter installed. We had to carry water from a standpipe halfway down the plot. We had an electric kettle and a small electric oven and there was even an old fireplace where we could burn logs to keep warm.

Due to the piggery and the pigswill in the fields behind The Shack we often had rats to contend with.

We had to keep any food in tins and at night if a rat got in our dog Rex would wake us up to go rat catching, he was a great dog and lived with us for over twelve years.

On Boxing Day 1961 it started to snow and it didn’t clear for about three months making it extremely difficult to get up and down the road. We had an Austin A40 van with town and country tyres and several bags of cement in the back which enabled us to get to work.

We survived the long and hard winter of 1962 in The Shack and were determined to move out before the bad weather set in at the end of the year and on 2 December 1962 we moved into the partially finished bungalow and immediately went down with the flu, so much for being in the warm. It had taken us fourteen months to get to the stage where we could move in, although there was a lot more work still to be done to complete. 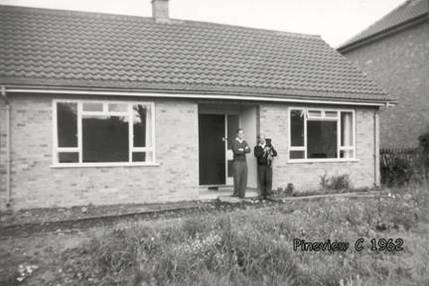 The building work was carried out in our spare time as we were working for a local builder Monday to Friday 7.30 to 5 and so called half day on Saturday when we finished at 4 PM.

In the 1960s the road had many small businesses and smallholdings run from peoples homes. We were surrounded by pig farms, builders, scrap dealers, motor mechanics, transport-haulage firms, chicken and cattle farmers, kennels, cattery and riding stables.

In January 1970 we started our builders business after buying the yard behind 87 to (95) from George Bayley, this had been a part of his pig farm which he bought from the Stevens, the remainder later being sold to Lambeth’s Riding Stables at Fir Tree Farm.

Up to that time George had been rearing several hundred pigs in the piggeries at the back of our garden and on Sundays about lunchtime, their lorry would be parked in the road full of squealing pigs waiting to be taken on their last journey to the Walls sausage factory. We were regularly called upon for pig chasing duties when they got out and repairing fractured pipes when we had the freezing weather.

After we came here the Bayleys built their new pair of houses called Kimberly House Farm 87, (97) and 89 (99) next door. They were listed as Pig Farmers and Swill Collectors in a local directory of the time. The smell from the swill was quite ripe when the wind was in our direction.

The old wooden and corrugated iron bungalow in front was later demolished and we used some of the timbers for the roof of our double garage that we were building at the time.

81, (91) Highlands Mrs. Ethel Jellis lived in the bungalow in front of our yard which was then number 81. Before her the Watson’s one of whose sons went on to become the local baker with several local shops, lived here. He used the shed at the rear of the house to ice and decorate wedding and birthday cakes. Whilst doing work in the roof we found some old Watson’s accounts from the shop in London where they had started a bakery listing a van and bicycle they bought for the business.

We raised cattle in the sheds at the rear of 91 for some years and they also grazed in the fields at the back of 131.

We had a vehicle operators licence here from 1970 to 1991 for our Ford truck, and our JCB and two vans were based here.

Most of our contracts were within about a fifteen mile radius and we did work at various properties in the road over the years and trust that we gave good service building houses, extensions, fitting new kitchens and all sorts of general maintenance jobs.

We won the contract to build a new chalet bungalow at 131 Woodlands Road, then known as Fairview Poultry Farm for the Date family in 1973 who at that time lived in a wooden dwelling at the front of the property where the fish pond is now, We were given the opportunity to buy seven acres at the rear of this property in 1973 whilst still building the house and used it for many years grazing our cattle.

In the 1950s Mr. G. S. George lived here and over the years it has been variously a small cattle farm, piggery, chicken farm producing eggs and grazing for cattle and horses.

In 1996 the Date family decided to sell 131 and we bought the property. We altered and extended it and in 1999 we moved into what is now our very happy home.

We then sold 95 our home for 38 years, then our yard with 91 which had been our base for all those years.

We have made many friends in Woodlands Road and have lots of happy memories and feel fortunate and privileged to be living here.